When I started buying CDs about fifteen years ago, I suddenly found that I had access to much more music than before....yes, I realize that CDs have been around for 25 years and, yes, it took me ten whole years to make the conversion.  I've never said that I was on the cutting edge of technology.  I basically don't make a change until I have no other choice, or in this case, very few blues cassettes were available anymore.

One of the great sources of good blues, at a very reasonable price, was Evidence Music.  Evidence was a Pennsylvania-based label that had a massive catalog of old blues and jazz recordings.  The label had bought the rights to several European record labels, such as Black and Blue, which had recorded many of the blues artists who had toured overseas during the 70's, doing various blues festivals.  The blues was much more popular overseas during that time period, so if a blues man, other than B.B. King, wanted to make any money back then, they had to do the European festivals.

During those festivals, a promoter named Didier Tricard recorded many of these acts between appearances, usually in single-day sessions, basically live in the studio for his labels Isabel (named after Buddy Guy's mother) and Black and Blue. Tricard actually recorded Buddy Guy and Junior Wells' Pleading the Blues and Guy's Stone Crazy! on the same day!!!!!  All of these albums were released overseas and for years, were only heard about by most blues fans until Evidence began reissuing them stateside in the early 90's.

Most of these CDs were sold for about 2/3 of the regular CD price at the time, and Evidence label head Jerry Gordon tacked on alternate takes or extra tracks on many of the recordings, so some of them were a good bit longer than the regular albums of the 70's period.  It was a GREAT deal, because the music was fantastic and you often saw artists paired together that you wouldn't see otherwise.

Naturally, when I started buying CDs and was looking for the most bang for my buck on blues releases, I gravitated toward Evidence.  I had heard about many of these CDs previously and really wanted to hear it for myself.  Today, we will look at five Evidence reissues that no blues fan should be without and, don't worry, we will revisit this topic again soon...... 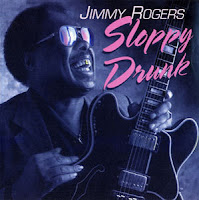 Jimmy Rogers - Sloppy Drunk:  Rogers had been basically inactive since the early 60's, with only a recording for Shelter Records a couple of years earlier, when he recorded this session for Black and Blue in 1973.  He's backed by a fantastic band, which includes the ultimate blues band (David Myers on bass, Louis Myers on guitar, Willie Mabon on piano, and Fred Below on drums).  Most of the songs on this set were old Rogers favorites, and the mix is a bit muddy at times, but Rogers is in really good form here.....his vocals are strong and his guitar work, always underrated to me, is equally strong and well-complemented by Mabon's piano and the tight rhythm section.....just a great, relaxed session by a group of seasoned pros.  It's hard for me to pick a favorite Jimmy Rogers CD....they're all great.....but this one is hard to beat.  This song, "Slick Chick," always puts a smile on my face. 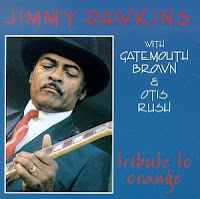 Jimmy Dawkins - Tribute To Orange:  I didn't even know about this one prior to seeing it in the record shop, but check out that marquee (With Gatemouth Brown AND Otis Rush).  I guarantee you that a lot of blues fans did a double-take when they saw that line-up.  Before you get too excited, please know that Brown appears on eight of the thirteen tracks (from 1971) and Rush appears on five (from 1974).  That being said, it's still a wonderful listen.  Both Brown and Rush good-naturedly battle with Dawkins throughout and it makes for some interesting interplay.  Dawkins' usual serious subject matter and his terse vocal style are also in place.  This is a typically excellent Jimmy Dawkins release that many fans might have missed when it was reissued in the mid 90's. 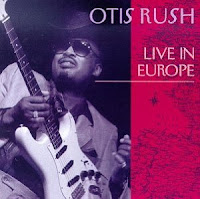 Otis Rush - Live In Europe:  When people ask me about my favorite Otis Rush live albums, this 1977 set has is in the top two (for me, just behind the Wise Fools Pub set from a year earlier).  Recorded in France with rhythm guitarist Bob Levis, bass player Bog Stroger, and drummer Jesse Green, Rush tears through an inspired set of old favorites....if you're a fan, you've no doubt heard most of these before, but Rush is really in the zone for this set, with some of the best guitar playing I've heard from him.  Some of his live sets are marred by inconsistent backing or a perceived lack of interest on Rush's part, but this release stands with his best live recordings from start to finish. 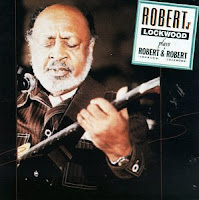 Robert Lockwood, Jr. - Plays Robert & Robert:  This may be one  of my all-time favorite blues recordings.  Robert Lockwood, Jr. has always been one of the most fascinating characters in the blues.  For starters, his stepfather was Robert Johnson.  Most of the stories I've heard about him, and interviews with him (particularly the Living Blues interview from the late 90's.....classic) demonstrate that he didn't suffer fools lightly.  He was definitely his own man as a performer as well.  He often played 12-string guitar (as on this set) and he was as much into jazz as he was the blues and didn't compromise for anybody.  On this outstanding set from 1982, he plays a mix of Robert Johnson's songs and his own songs, solo on his twelve-string and it's absolutely fabulous.  If you only own one Robert Lockwood, Jr. album (and I strongly recommend against doing that), this is the one you must have. 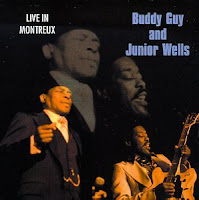 Buddy Guy and Junior Wells - Live In Montreux:  Recorded in the Summer of 1977, this set teams the original Blues Brothers with Jimmy Johnson (guitar), Dave Myers (bass), and Odie Payne (drums).  Wells and Guy are in top form.....Wells' vocals and harmonica are spot-on, and   Guy's guitar work is powerful and to-the-point.  To me, this is their best live set from start to finish.  As an added bonus, the Evidence reissue included five extra tracks from artists appearing at the same performance using the rhythm section of Myers and Payne.  One track features Johnson with Hubert Sumlin, and the other four feature vocals from Johnson, Eddie Clearwater, Myers, and Andrew "Big Voice" Odom respectively.  Sounds like it would have been a fun show to attend.

That's all for now, but we will be revisiting the Evidence Music catalog in the near future.  There are plenty more great reissued recordings from Black and Blue and other labels that are just as good as these, and can be had for a very nice price.