As a public service, this week's Friday Blues Fix will offer a few suggestions on what to give that dedicated blues fan in your family that's nearly impossible to buy for.  Therefore, this week's post will be a combination of New Blues You Might Have Missed for Christmas.  As always, these selections have or soon will be featured in expanded versions in an upcoming edition of Blues Bytes. 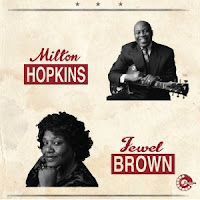 Milton Hopkins & Jewel Brown (Dialtone Records):  If you're not familiar with Dialtone Records, you're missing out on some fantastic recordings featuring some of the living legends of Gulf Coast blues and R&B from the 50's onward.  The label has released some excellent recordings over the past couple of decades and this one is no exception.  78 year-old guitarist extraordinaire Hopkins has performed with sax man Grady Gaines in Little Richard's early band, the Upsetters (one of the most in-demand rock/R&B bands of the 50's), Gatemouth Brown, and enjoyed a nine year stint as B.B. King's rhythm guitarist.  74 year-old vocalist Brown once turned down an opportunity to tour Europe with Lionel Hampton (she was still in high school), but later served as Louis Armstrong's featured vocalist for eight years.

Dialtone came up with the great idea of teaming these two up for an album and the results are outstanding.  Brown's sassy and smart vocals are an endless pleasure and Hopkins shows a deft touch on guitar, both electric and acoustic (his cousin was country blues legend Lightnin' Hopkins). The songs are mostly traditional fare, ranging from a reggae-flavored "Jerry" (a holdover from Brown's days with Armstrong), "There's A Light," a smooth gospel number, and an acoustic tribute to Lightnin' Hopkins (Milton's cousin).  Hopkins also contributes several tasteful instrumentals that blur the line between blues and jazz.  This is a nice, smooth, laidback set that is somewhat reminiscent of the 90's recordings from fellow Texans Carol Fran and Clarence Hollimon.  Hopkins and Brown are talented, versatile performers who still have a lot to offer.

Check out this and the rest of Dialtone's superlative catalog.  You will be rewarded with some fine listening if you do. 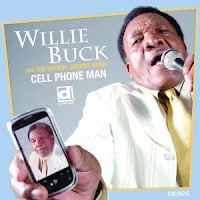 Willie Buck - Cell Phone Man (Delmark):  By now, you've probably determined that I'm a traditional blues type of guy.  I didn't start out that way, but slowly moved in that direction.  Great recordings like this one are major factors in that move.  Willie Buck has been a longtime fixture on the Chicago blues scene, mostly as a weekend warrior while toiling away as an auto mechanic during weekdays.  He fell in love with the blues as a youth, when a relative smuggled him into a Muddy Waters show.

His new release includes several songs associated with Waters and his crack back-up band, the Rockin' Johnny Band, capture the feel of 50's era Chess blues perfectly.  However, though Buck's vocals are influenced by Waters, he is very much is own man and is also a pretty good songwriter, too, writing songs in both the blues and R&B vein.  This is as good a set as they used to do in the 50's, updated to a certain degree to cover modern subjects (see the title track).  Judging by this effort, Willie Buck has been criminally under-recorded over his career.  Kudos to Delmark for addressing that problem and hopefully we will hear more from Buck in the future. 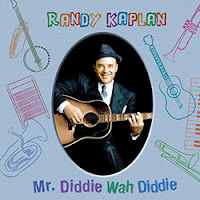 Randy Kaplan - Mr. Diddie Wah Diddie (myKazoo Music):  Every blues fan wants to share the music they love with as many people as possible.  Thanks to Randy Kaplan, the blues can be shared with children.  Kaplan is a renowned children's performer who spent two years putting together this project.  Not only is this disc child-friendly, adults will find a lot to enjoy, too.  It's not only  a lot of fun to listen to, it's also loaded with lots of information about the history of the blues and many of the pioneers who helped develop it.

Kaplan is joined on this CD by several kids of various ages, who sing along, ask questions, and tease and cajole him throughout.  There's also a "narrator" of sorts, named Lightnin' Bodkins, who provides info about the artists mentioned, offers fascinating tidbits about the music itself, and tries to figure out a suitable blues name for Kaplan.  Kaplan also "adjusts" some of the lyrics to make them a little more suitable for kids ("In the Jailhouse Now" becomes "In a Timeout Now," "Kindhearted Woman Blues" becomes "Kindhearted Babysitter Blues," etc....).  The liner notes are 20 pages long and fills in details about the songs featured and the artists associated with them.  Even though this is designed for kids, I found this very enjoyable and even learned a few things that I didn't know in the process.  Chances are that you might, too. 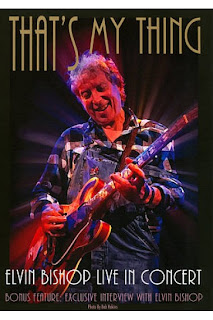 Elvin Bishop - That's My Thing:  Elvin Bishop Live in Concert (Delta Groove Music):  This DVD was past due.  Bishop has been playing the blues for over 50 years, generally doing it his way, occasionally even venturing into pop territory ("Fooled Around and Fell In Love," with Mickey Thomas on vocals), and  always doing it with a wink and a smile.  This DVD captures Bishop performing at Club Fox in Redwood City, CA around this time last year, backed by an excellent band.  The 96-minute concert features Bishop performing some of his fan favorites, like "Calling All Cows," "Travelin' Shoes," "Rock My Soul," "Gettin' My Groove Back," and "Party 'Til the Cows Come Home."  He's his usual amazing self on guitar, but the DVD also shows his easy rapport with his audience (even the hecklers) and his wry, self-effacing sense of humor.

There's also a 20-minute interview with Bishop that's definitely worth watching.  He talks about his rough beginnings in Iowa in a house with no electricity and running water, his learning to play the blues while living in Chicago, his success as a solo artist in the 70's, and his later and current career.  He mixes in several entertaining stories in the process.  If you're an Elvin Bishop fan, this DVD is an essential purchase.

Heroes of the Blues (Card Set),  By Robert Crumb and Stephen Calt:  Sometime after I started listening to the blues in the late 80's, I was browsing in a record store in search of some new music.  I wasn't having much luck, so I was about to leave empty-handed when I stumbled onto this in the musical accessory section, next to the harmonicas.  I was more familiar with Robert Crumb than I was the artists listed on the back of the box, all early pre-war blues singers and musicians, but I decided to give it a shot.  Included in this 36 card set are Crumb's renditions of each artists with a brief biography written by Stephen Calt on the back.

Calt, who passed away in 2010, was a source of controversy for many blues scholars, who felt he interjected his opinion into his work too often, and sometimes was fast and loose with facts.  Personally, I don't really know that much about his work other than a few sets of liner notes and these cards, but he plays it pretty straight on these (though there's not much room to do otherwise).  Crumb's artwork is excellent.  Besides this set of blues legends, he also did card sets for early jazz greats and early country music greats, so these were a labor of love for him and it shows.

These cards were an indispensable source of information for me as a fledgling blues fan.  Calt also listed recommended albums for each artists, most of which were available at Yazoo Records.  I started picking up recordings by many of these artists, many of which were featured on Yazoo's many anthology sets, collecting multiple artists from the same region and time period.  This led me to discover even more great music from more wonderful sources, and chances are that the blues fan in your family will be able to do the same thing if they get their hands on this set.


Hopefully, we've given you a few ideas for Christmas gifts for your blues-loving family and friends of all ages.  You won't be disappointed with any of these items if you choose to pick them up.