New Blues For You (Thanksgiving 2012 Edition)

Blues lovers....let us give thanks, because it's time for a look at some new and upcoming releases that deserve to be heard.  Today, FBF will be looking at four sizzling new CDs that cover a broad range of blues styles.  As always, expanded reviews of these discs will be available in an upcoming issue of Blues Bytes. 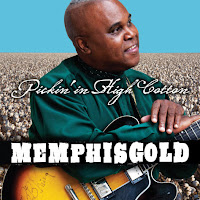 Memphis Gold - Pickin' in High Cotton (Stackhouse Records):  Memphis Gold (a.k.a. Chester Chandler) learned to play guitar in Memphis from the legendary Rev. Robert Wilkins.  He ended up playing guitar in one of the Bluff City's most revered bands, the Fieldstones, for a number of years before settling in Washington, D.C., where he teamed up with harmonica player Charlie Sayles.  After a stint with Deborah Coleman, he launched a solo career.  Pickin' in High Cotton is his fourth release, and like the rest, it's a mix of old school traditional blues, mixed with greasy Memphis soul, and the funkiest back-up band heard in a while.  Memphis Gold is a gifted writer with a unique and personal style.  Many of these songs are autobiographical in feel.  Check out this clip from one of the highlights of the disc, "Biscuit Boogie." 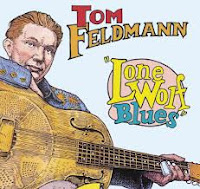 Tom Feldmann - Lone Wolf Blues (Magnolia Recording Company):  Guitarist Feldmann is a favorite of mine with his wonderful interpretations of classic pre-war blues and gospel tunes on several previous releases.  This set features tunes from Rev. Gary Davis, Blind Willie Johnson, Bukka White, Son House, Mississippi John Hurt, and others, along with several Feldmann originals, mostly gospel-based, that fit seamlessly with the standards.  Feldmann is an excellent guitarist (and is currently a featured performer on several of Stefan Grossman's Guitar Workshop DVD series) and also has a warm tenor vocal style that's perfect with the material.  If you like acoustic blues guitar, this CD definitely won't disappoint and will probably be a favorite of yours. 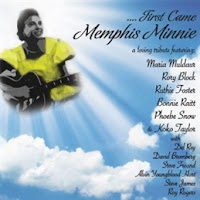 Maria Muldaur & Friends - ....First Came Memphis Minnie (Stony Plain):  Muldaur has been busy this year.  Earlier in the year, she released the excellent New Orleans-flavored Steady Love, and has followed it with this tribute to one of her biggest influences, Memphis Minnie.  Muldaur ably handles eight of the thirteen tracks...her voice is as sweet as ever, but with a touch of added grit that's especially appropriate to the material.  There are also tracks by Bonnie Raitt (teaming with Steve Freund on acoustic guitar), Ruthie Foster, and Rory Block.  Additional tracks borrowed from earlier recordings feature the late Phoebe Snow and the late Koko Taylor.  Other performers include Alvin Youngblood Hart, Roy Rogers, Bob Margolin, David Bromberg, and Steve James.  This is a great, rootsy set showcasing a highly underrated early talent who paved the way for many of the great blues women that are making their presence known in a big way today. 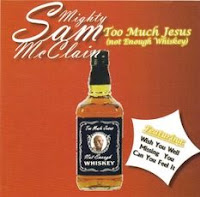 Mighty Sam McClain - Too Much Jesus (not Enough Whisky) (Mighty Music):  After charting a few regional soul hits in the 60's, Mighty Sam McClain dropped off the music scene for about fifteen years until resurfacing on Hubert Sumlin's first Black Top release.  Since then, he's released fourteen albums for various labels.  This latest release is another fine set of deep southern soul classics, with a few nods to 70's-era funk this time around.  McClain is a gifted singer in the tradition of Solomon Burke and Little Milton, but he's developed into a talented songwriter, too.  The title track recounts how some of McClain's friends stopped coming around after he stopped drinking and started trying to share his faith with them.  If you're into old school soul and R&B, you should give this one a spin.