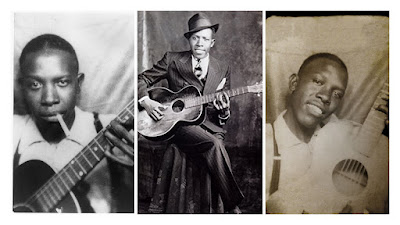 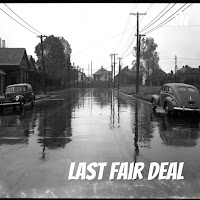 I'm a late arrival to the whole podcast thing, only really paying attention over the past year and a half.  I have searched for a few good podcasts about the blues and recently stumbled onto one that any fan of the blues would probably enjoy, Last Fair Deal:  The Robert Johnson Podcast.  It's hosted by Preston Lauterbach and Elijah Wald.  Both have written extensively about the blues and especially about Robert Johnson.  Lauterbach collaborated with Johnson's half-sister, Annye E. Anderson, on her book Brother Robert - Growing Up With Robert Johnson, and Wald wrote Escaping The Delta:  Robert Johnson and the Invention of the Blues, so one could say that they were pretty familiar with the subject of this podcast.
There have only been four or five episodes so far (it began airing in August of 2021), but all of them have been excellent.  Ms. Anderson was interviewed in the initial episode and she provided some good information about Johnson that only a family member could relate (and also promised a future book with even more information in the near future).  Others highlighted so far have been Larry Cohn, the producer of the Robert Johnson box set from the early 90's, as well as other excellent historical reissues, Living Blues founder Jim O'Neal, who shared a couple of interviews with musicians who knew Johnson, including a most interesting take on what really killed Johnson, and musician Jerron "Blind Boy" Paxson.  All of the episodes so far have been very informative and enlightening. 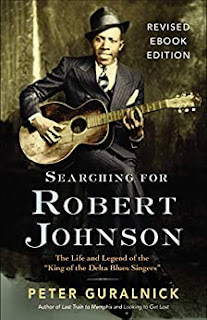 The first episode that I heard was an interview with my favorite music author, Peter Guralnick, who wrote the essay Searching For Robert Johnson in the early/mid 80's, publishing it in book form in the late 80's.  Guralnick, Lauterbach, and Wald talked for about 45 minutes about Johnson's history, the additional information that has come to light since Guralnick published his essay, and Guralnick's relationship with Mack McCormick, one of two researchers (the other was Steve LaVere) who collected, and jealously guarded, much of Johnson's known history.  Both men have died and much of their research remains under wraps.
During the discussion, Guralnick mentioned that he had updated and re-published Searching For Robert Johnson, adding relevant information recently revealed as well as some other information, including a superb discography and bibliography to help fans dig deeper into Johnson and his influences.  The new edition of the book is available in digital form only right now and can be found at Amazon.  I picked it up before Christmas and read it in one sitting.  It's been a while since I read the original and Guralnick fills in a few blanks here and there, but the original essay is well worth reading if you've never read it.
Since I started listening to Last Fair Deal, I've managed to fill in a few gaps in my Robert Johnson listening, both of him and some of his influences.  I thought I'd list a few in case anyone out there might be interested in hearing more.  Johnson basically took from those musicians he enjoyed and added his own brand of blues to the mix, not unlike future music pioneers of other genres like Elvis Presley or Miles Davis or Jimi Hendrix, who combined other styles and genres into their music.  What made him stand out among blues artists, then and now, was his unique guitar playing and his vocals, which, with their vulnerable, almost haunted quality, were quite different from many of his contemporaries.
Here are some recommended recordings from Johnson and from a few of his influences...... 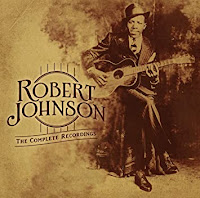 Robert Johnson - The Complete Recordings:  The Centennial Collection (Sony Music Entertainment):  Like most blues fans, I had the Johnson box set when it was released in 1990.  I also had the separate King of the Delta Blues Singers albums released in the 60's that I bought while I was in college back in the 80's.  The sound on The Complete Recordings (released in 2011) is superior to the other sets and the playing order is improved over the box set, which listed alternate tracks immediately following the released version, which tends to get monotonous for the regular listeners.  It's really splitting hairs as far as the sound goes, so either collection deserves a spot on blues fans' shelf.
Influences 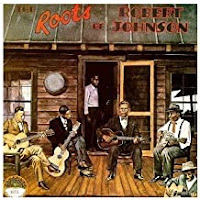 The Roots of Robert Johnson (Yazoo Records):  This covers just about every major influence on Johnson's music.....including Skip James, Charley Patton, the Mississippi Sheiks, Son House, Kokomo Arnold, Lonnie Johnson, Leroy Carr, and Scrapper Blackwell.  As you listen to a lot of these songs, you will figure out where some of the later blues standards came from, such as Blackwell's "Kokomo Blues" from 1928, the origin of the standard "Sweet Home Chicago."  There are actually two versions of this album on Yazoo, one has 14 songs and the later version has 23 (with 11 from the first edition). 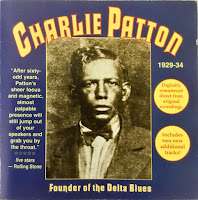 Charley Patton - Founder of the Delta Blues and King of the Delta Blues (both Yazoo Records):  Now Patton and Johnson don't really sound that much alike.....Patton was a rougher, coarser, rawer listen than Johnson was......in fact, you definitely hear more of a Patton influence in Howlin' Wolf's music, but Patton influenced just about every Delta blues artist during his career with either his vocals, his percussive guitar playing, or his showmanship.  Granted, it's a bit harder to listen to Patton's music because it is rougher (the poor sound quality of his surviving recordings doesn't help either.....Patton recorded for Paramount, whose production methods and materials were of less-than-stellar quality), but listener's patience will be rewarded with some great music.  I don't really have a preference as to which set is best.....both have lots of good music. 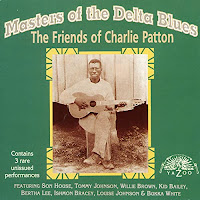 Masters of the Delta Blues (Yazoo Records):  Subtitled The Friends of Charlie Patton, this is a historic set that includes tracks recorded at an awesome 1931 recording session that included recordings from Patton, Son House (some of his best work), and the seldom-recorded, but highly influential Willie Brown.  There are also sides from Tommy Johnson and Bukka White included.  These will give you a good idea of the music that surrounded and influenced Johnson as he traveled the Mississippi Delta.  Yazoo has several excellent Mississippi blues collections with similar music from different artists, but this is a great place to start listening and actually may be all you need.......the Son House tracks are just phenomenal in their drive and intensity. 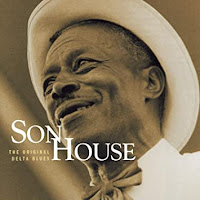 Son House - Delta Blues:  The Library of Congress Sessions, 1941-1942 (Biograph Records) and The Original Delta Blues (Sony Music Entertainment):  House was probably the most direct Delta influence on Johnson, so Alan Lomax made these early 40's recordings of House while researching Johnson's music.  These recordings capture House's intensity as well as those 1931 recordings.  House was also a huge influence on Muddy Waters' music.  The Original Delta Blues are recordings from the 1960's, after House's "rediscovery."  House had to basically be retaught how to play his music (by Canned Heat's Alan Wilson, who guests on a couple of the tracks), but he was a quick study and the only reason these tracks aren't more revered is because the earlier recordings are hard to top. 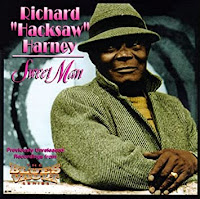 Richard "Hacksaw" Harney - Sweet Man (Adelphi Records):  Harney was a later influence on Johnson, apparently.  I plan to write more about him in a separate post, but Harney was considered by many to be the gold standard on guitar playing back in Johnson's time.  His style was quite different from the traditional Delta blues sound, but according to Robert Lockwood, Jr., Johnson traveled with Harney and played with him in the latter couple of years of his life.  His playing is actually closer to Mississippi John Hurt's, and goes more in a Piedmont direction, to be honest.  Who knows......had Johnson lived, he might have incorporated some of Harney's sound into his own playing.  Harney's career in music was short-lived for a number of reasons and, hopefully, I will be able to elaborate more in the near future about him. 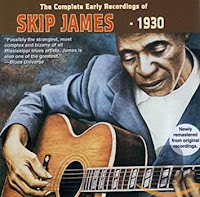 Skip James - The Complete Early Recordings (Yazoo Records):  I wrote about James many years ago on this blog.  The first time I ever heard him just blew me away.....I feel like Johnson was influenced by his high-pitched haunting vocals more than anything, although James' "Devil Got My Woman" might have influenced some of Johnson's own work, plus Johnson did adopt James' "22-20 Blues" as "32-20 Blues."  James' music can be an acquired taste as well, especially these earlier recordings (which were done in 1931, not 1930 as indicated on the album cover), also from Paramount.  Check out his Vanguard recordings of the 60's and then revisit these if you want. Skip James wasn't in a class by himself as far as Delta bluesmen went, but it sure didn't take long to call roll. 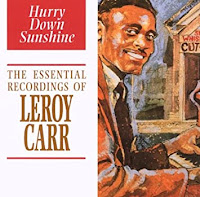 Leroy Carr - Hurry Down Sunshine:  The Essential Recordings of Leroy Carr (Indigo Records):  Carr, with guitarist Scrapper Blackwell, was one of the most popular blues artists of his time and his sound (with Blackwell's guitar) really influenced Johnson and countless other rural blues musicians with his warm, mannered vocal delivery and his musical arrangements, the predecessor to what is now called "urban" blues.  Many of his songs are considered standards today.  Other more "urban" blues artists, like Lonnie Johnson and Big Bill Broonzy influenced Johnson's playing, but Carr and Blackwell were probably the most influential.  As mentioned above, Blackwell recorded "Kokomo Blues" in 1928, which was transformed into "Old Kokomo Blues" by Kokomo Arnold in 1934, and transformed by Johnson into "Sweet Home Chicago" a few years later.
In a future post, we'll look at some of Johnson's contemporaries and followers, so please stay tuned.
Posted by Graham at 12:01 AM