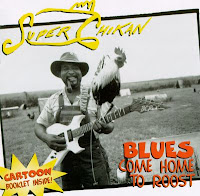 Rooster Blues Records was one of my favorite labels.  I really enjoyed the raw feel of their recordings, basically live in the studio, which obviously made the label's artists most comfortable because all of their recordings were exciting.  Looking back, it's hard to think of even one recording from Rooster Blues that wasn't a favorite at one time or another.  I really need to devote an entire post to the label in the near future, but today I'm just going to talk about one of their recording artists and that artist's song that made its way onto Volume Two of our Friday Blues Fix Mix CD.

James "Super Chikan" Johnson is one of the unique characters of the blues, no doubt about it.  He's played music since he was a boy, like many youngsters in Mississippi during his early years, his first instrument was a diddley bow.  He bought a guitar, an acoustic two-stringer from the Salvation Army store in Clarksdale.  He drove a truck when he reached adulthood, but still worked on his music and songwriting and carving out his own unique style.

His first release was on Rooster Blues, Blues Come Home To Roost, in 1997.  It was one of my favorites that year.  It was raw and funky and had some of the coolest songs.  My favorite was the title track, "Down In The Delta," a sly and slippery funky blues about a regular day in the Mississippi Delta that packs more of a punch than listeners might expect.

The imagery is vivid, painting pictures of peach trees blooming, clothes hanging out on the line, the hum of tractors, cotton blooming, agricultural planes flying, catfish farms, April showers, May flowers, watermelon etc....., but at the end of each verse reflecting on what's perceived as good things about the Delta, Super Chikan drops a line stating that below the surface, thing aren't as blissful as they appear, at least for him.......his shoes are worn out, his front porch is about to fall off the house and his 25 year old car is about to be repossessed.  It's a sobering touch to what would appear to be a celebration of life in the Delta.....and really, life in general.   Not everything is as rosy a picture as one would believe, which is certainly the case in the Delta.

Super Chikan later re-recorded "Down In The Delta" on his album Chikadelic, which came out about ten years ago, but this original version is still my favorite.  He's maintained a fairly high standard with his recordings and he remains a crowd favorite.  He's also established quite a reputation for designing unique guitar made out of gas cans, toilet seats, and anything else he can think of.

"Down In The Delta" is a great example of modern Mississippi Delta blues, even twenty years after its original release........I can't believe it's been that long ago.  Anyway, enjoy Track Thirteen!