This has been a great summer for new blues releases, with exciting albums from new artists, established artists, and artists from years gone by.  This week's Friday Blues Fix will look at some from each category.

As always, expanded reviews of these albums can be found in current and upcoming issues of Blues Bytes, THE monthly online magazine of blues CD reviews.  Here we go..... 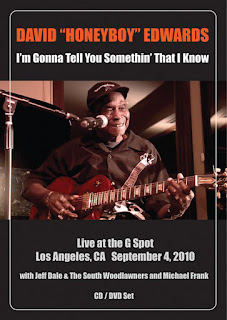 David "Honeyboy" Edwards - I'm Gonna Tell You Somethin' That I Know (Pro Sho Business):  Now here's an item that should be in every blues fan's collection.  Edwards was a musical treasure and the last living link to the pre-war Mississippi Delta blues era.  He crossed paths with nearly all of the blues legends of the 30's and 40's and was always a great source of information about many of them.  He performed well into his mid 90's and was still quite nimble on guitar when I saw him in early 2011.

In 2010, Edwards appeared at a Los Angeles club called the G Spot with his longtime friend/manager/collaborator Michael Frank (founder of Earwig Records) and guitarist Jeff Dale and his band the South Woodlawners.  The event was recorded and filmed and it ended up being the last time an Edwards performance was documented.  The performance has been released as a CD/DVD set and it shows that Honeyboy still had plenty in the tank.  Both formats are fine, but the DVD stands out because it gives viewers a chance to observe his guitar playing up close, especially on slide guitar.  He runs through a set of tunes that will be familiar to most blues fans, but he plays them with his usual spirit, passion, and grit.  Also, there's a lengthy excerpt at the conclusion that features Edwards talking to a receptive audience, telling stories Robert Johnson, Charley Patton, and giving advice to budding musicians.  Blues fans should snatch this up at the first opportunity. 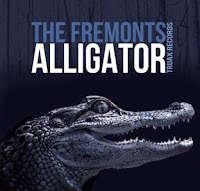 The Fremonts - Alligator (Truax Records):  I have always enjoyed listening to the 50's and 60's swamp blues recordings from Excello Records, and The Fremonts recapture those days perfectly on this, their third release.  They include covers of several swamp blues classic tunes that are maybe not so familiar to casual fans, a couple of vintage Frank Frost sides, and they even throw in a few R&B/soul tunes via Memphis and New Orleans, not to mention covering R.L. Burnside and Bill Withers.

That's a pretty diverse setlist, but The Fremonts work their musical magic on these tunes, giving them that vintage sound (the disc was recorded live and mixed mono), and their frontman, singer Mighty Joe Milsap, works through these songs with skill and charm,  Not just content to cover yesterday's favorites, The Fremonts are more than capable of writing tunes that mesh perfectly with the older tunes.  This is just a fun release from start to finish, especially if you love those good ol' swamp blues like they used to play them. 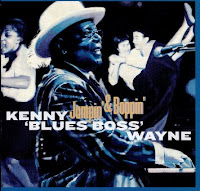 A lot of this music would have been a nice fit in the catalog of 50's-era Ray Charles and sometimes Wayne brings the late legend to mind with his warm vocal style.  He mixes midtempo R&B tunes with breathless boogie and jump numbers, and even turns in a pair of dandy instrumentals that put his dexterity on full display.  This is Wayne's tenth release and if this was a perfect world, he would be a whole lot better known than he is.  Give this one a spin and prepare to be dazzled. 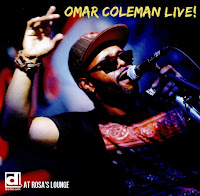 Omar Coleman - Live! (Delmark Records):  Coleman's Born & Raised was one of 2015's biggest releases, finishing #15 on Living Blues' Top Radio Albums of the Year, despite being released in mid-June.  Delmark recorded three of Coleman's late summer performances at the famed Rosa's Lounge last year and decided to strike while the iron was still hot, collecting the best moments from those three nights.

Backed by his excellent band, Coleman mixes healthy doses of soul and funk with his blues.  He pays tribute to one of his musical mentors, Junior Wells, and also covers tunes from Willie Dixon, Johnnie Taylor, and Rufus Thomas.  He also features several of his original tunes as well, mixing traditional blues with soul and jazz.  This is an energetic and entertaining live set.  It's great to see this young blues man getting the attention he deserves and there's still much more to be heard from him. 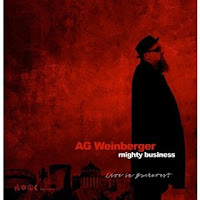 Weinberger covers three Muddy Waters tunes and does a fine job.  He also covers Sam Taylor, the Meters, and Charlie Parker.  How's that for versatility??!!  His own material is strong as well, with a couple of tunes that lean toward Southern blues rock and boogie.  He's a skilled guitarist and a powerful vocalist, and based on this fine set, it's pretty easy to see why he's all the rage in Romania and why he deserves a shot stateside as well. 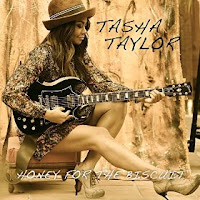 Tasha Taylor - Honey For The Biscuit (Ruf Records):  Ms. Taylor is the daughter of soul legend Johnnie Taylor and she explores some of the same musical terrain as her late dad.....the cool retro sounds of Stax-era soul music with a more modern roots style that gives more than a passing nod to the blues.

Taylor is a pretty talented songwriter, penning all thirteen tracks.  These tunes run from blues to soul to R&B to jazz and funk.  She has a wonderful voice that's built for blues and soul and she's backed by a standout band which includes guests Keb' Mo', Robert Randolph, Samantha Fish, and Tommy Castro, who joins Taylor on vocals for one track.  If you like soul blues done well, you need to pick this one up.  I think her dad would be proud. 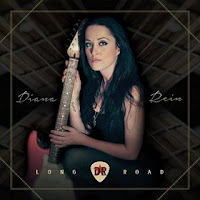 Diana Rein - Long Road:  Rein's second album is a strong set of original tunes.  Dubbed "The Six-String Siren," the Romanian-born, California-based guitarist wrote all of the songs and played all the instruments on this release.....guitars, bass, and EZDrummer.  She's a fine guitarist and has a haunting Emmylou Harris-like quality to her vocals.

Her specialty are blues rockers and there are several good tracks here in that vein.  There's a nice tribute to one of her musical idols, Stevie Ray Vaughan.  She also outdoes herself on a couple of ballads, which really display her vocal talents. and a lovely instrumental, which closes the disc.  Overall, this is a very good release and, to be honest, I wouldn't have known that she was the only musician on here if I hadn't read the liner notes.  I wasn't familiar with Ms. Rein's work prior to receiving this disc, but Long Road makes me want to hear more.