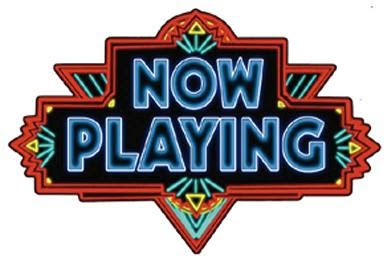 Summer's here!  The time is right for more sneak previews of new blues releases.  Friday Blues Fix is back with reviews of seven.....that's right, SEVEN.....capsule reviews of brand new albums that be found at your local record store, or your online record store, or downloaded at your convenience.  Face it, folks!  There's NO reason why you shouldn't track down these great recordings as soon as possible.  As always, if you want even more information about these releases, I recommend you check out past, current, and future issues of Blues Bytes, THE monthly online magazine of Blues CD reviews. 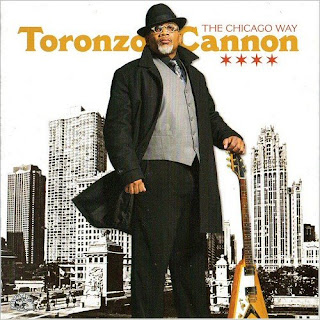 Toronzo Cannon - The Chicago Way (Alligator Records):  Friday Blues Fix did Ten Questions With Toronzo Cannon a couple of years ago, but a few things have happened to him since then.  Off the strength of his previous two releases for Delmark Records (Leaving Mood and John The Conquer Root),blistering performances at various venues (including headlining the Chicago Blues Festival last summer), and this, his debut for Alligator, Cannon is approaching upper echelon status.

This one is his best yet....."electrifying" doesn't even begin to describe it.  He wrote all of the songs, which range from blues anthems that bands will be covering years from now, to stylish Windy City shuffles to soulful ballads to blues rocking rave-ups.  There's no doubt, based on the performances on this release, that Toronzo Cannon is a blues man on a mission.......to get his sizzling brand of blues out there to as many folks as possible.  It's not too late to get on the bandwagon, and this is a great place to hop on. 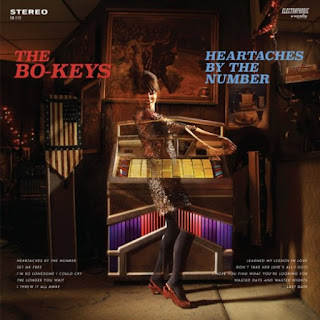 The Bo-Keys - Heartaches By The Number (Omnivore Recordings):  For their third album, and first since the death of their guitarist, Skip Pitts, the Bo-Keys venture into country-soul territory, covering classic tunes from Hank Williams ("I'm So Lonesome I Could Cry"), Freddy Fender ("Wasted Days and Wasted Nights"), and Floyd Cramer ("Last Date"), Merle Haggard (the seldom-heard "The Longer You Wait"), plus the classic title track, first made popular by country singer Ray Price, but covered by dozens of other country stars over the years.

The group also covers Bob Dylan ("I Threw It All Away") and the legendary Swamp Dogg (a.k.a. Jerry Williams, Jr.) ("The Longer You Wait"), plus they add a couple of originals in the same vein.  Though they've primarily been an instrumental group on their previous albums, mixing in a few vocals, this time around they use vocals on nearly all the tracks, either by Percy Wiggins, who takes the lion's share of vocals, or by Stax legend Don Bryant, who ably handles the title track.  This excellent disc shows that the line between soul music and country music is a thin one indeed. 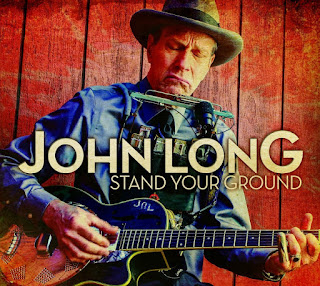 John Long - Stand Your Ground (Delta Groove Music):  St. Louis native Long grew up listening to his mother's old 78's and soon grew to love the blues and was learning country blues songs on his guitar.  Migrating to Chicago in the early 70's, he was mentored by Homesick James Williamson and was soon dubbed by no less a major figure than Muddy Waters to be "the best young country blues artist playing today."  Despite that glowing endorsement, Long recorded sparingly over the years; a cassette-only release in 1999 and 2006's Lost & Found on Delta Groove Records, one of that year's best albums.

Ten years later, Long released this long-awaited follow-up, and it's as good as it's predecessor.  With 13 tracks mixing vintage blues classics with equally worthy originals from Long, this may be one of the best country blues.  He's joined on a few tracks by a rhythm section, but for the most part, this is strictly Long, his guitar and harmonica, and that wonderful voice that sounds straight out of the 1920's or 30's.  The set list mixes blues and gospel, touching on both familiar themes and more modern fare (Parkinson's Disease on one track).  He pays tribute to Homesick James on one track, and even accompanies himself on percussion for one track with a 1938 Samsonite suitcase.  This disc is a barrel of fun and John Long is an underappreciated musical treasure. 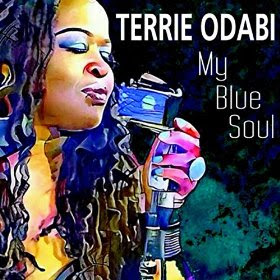 Terrie Odabi - My Blue Soul (self-released):  Oakland-based Odabi got her start in music in the 80's, backing several local R&B singers and performing with two world music/techno groups, before joining the neo-soul movement.  She's now immersed completely in the blues, having finished in the semi-finals two consecutive years (2014 and 2015) at the I.B.C.  My Blue Soul is her first full length album and it's appropriately titled, mixing blues and soul in equal measure.

Odabi has a powerful and versatile vocal style, displaying a remarkable range, and that's a great thing, but she's also a first-rate songwriter, penning all of the original tunes, which not only touch on blues and soul, but even gospel on a few selected tracks, notably a cover of "Wade In The Water."  Backed by some of the best players in the Bay Area (guitarist Kid Andersen, who also produced, drummer Derrick "D'Mar" Martin, guitarist Terry Hiatt, saxophonist Nancy Wright, etc...), Odabi has herself a winner with this disc.....a great set of soul and blues.  Expect to hear more from her in the future. 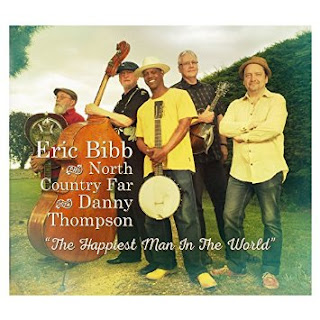 Eric Bibb and North Country Far with Danny Thompson - The Happiest Man in the World (Stony Plain Records):  Years ago, singer/guitarist Bibb was living in Helsinki, where he met a couple of musician brothers.......drummer Janne and Olli Haavisto, who played dobro and pedal steel, and mandolin/mandola player Petri Hakala.  They began playing together as Eric Bibb & North Country Far.  One night, while exchanging stories, Bibb happened to mention bassist Thompson, who's played with Alexis Korner, Donovan, Richard Thompson, Nick Drake, and Pentangle.  Thompson was one of Olli Haavisto's musical idols.  The rest, as they say, is history, as the group headed to the U.K. to record this album with Thompson.

The session consists of 15 laid-back, genial tunes that mix  acoustic blues, folk, and roots.  The entire disc just has these warm, comfortable, lived-in quality.  You could easily see these guys setting up on the porch and playing this music for their friends.  Bibb writes songs that are upbeat and lighthearted for the most part, but he also tells entertaining character stories with some of his songs, about lovers separated or the passage of time in our lives.  There are also a couple of instrumentals that showcase all of the musicians.  This is a well-crafted set of acoustic blues that sounds like the labor of love that it obviously was.....a great disc to listen to on your own porch, if you have one. 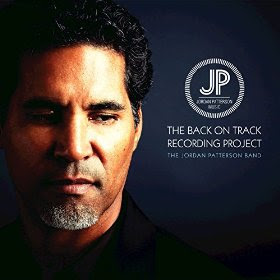 The Jordan Patterson Band - The Back On Track Recording Project (Flaming Cheese Records):  In the mid 90's, singer/harmonica player Patterson was a star on the rise, coming off an excellent debut release on JSP Records, touring clubs and festivals, sharing the stage with James Brown, Carlos Santana, Robert Cray, Son Seals, and U.P. Wilson.  Then, he took a step back and decided to leave the spotlight to become a concert promoter and artist touring manager for some of the biggest stars of the late 90's and early 2000's.

After a decade and a half, Patterson began performing again in 2014, releasing an EP of five songs that went over so well, he recently expanded it into a ten-song set.  With superb backing from a double-barreled guitar duo, and guest appearances from Shawn Kellerman on several tracks, Patterson turns in a great set that shows he's still a force to be reckoned with on the blues scene.  He wrote all ten tracks and they mix blues with rock, funk, and R&B.  His singing, great to begin with, is even better than before, as is his harmonica playing.  Hopefully, he will make up for lost time and is back on the blues scene to stay. 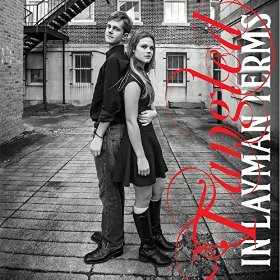 In Layman Terms - Tangled (self-released):  This duo consists of brother and sister Cole (guitar) and Logan (bass) Layman.  Cole Layman counts Hendrix, Page, SRV, Bonamassa, and Trucks as musical influences.  Logan Layman plays a mean bass and has a strong and seasoned vocal style.  They've competed at the I.B.C. the past four years and work in a variety of settings - duo, trio (with their mother on drums), and in a full band.  Oh, by the way, Cole just graduated high school and Logan will be a junior in the coming school year!

They've also released a remarkable debut album that shows them to be pretty sound songwriters.  They're backed by an excellent band, including horns on a couple of tracks.  They also present an interesting take on, of all tunes, "Smokestack Lightnin',' that's different from any I've ever heard before.  This is an impressive debut by a talented pair of youngsters who sing and play like they've been at it for years.  Check out "Fake It til I Make It," a song on Tangled that the duo penned that's taken from a poem their mom wrote about her depression.