It's been awhile since we looked at any new blues albums at Friday Blues Fix, so let's take a look at five brand new releases that definitely deserve a spin (or download) on the music system of your choice.  As always, more detailed reviews of these albums are available on current or upcoming issues of Blues Bytes, THE monthly online magazine of blues CD reviews. 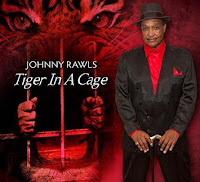 Johnny Rawls - Tiger In A Cage (Catfood Records):  There aren't many things that you can count on in life, but if you dig soul blues, one thing you can count on is an excellent Johnny Rawls release every couple of years.  The longtime veteran of the soul blues circuit has an amazing knack for turning out quality tunes that take you back to the old-school Stax/Hi-era sounds, and doing it in a manner that not only appeals to older fans, but also the up-and-coming listeners who have recently embraced the genre.

Rawls penned nine of the twelve tracks.....among them, the timely title track, which tells the story of a young black man's struggles with drugs, prison, and society.  He also remakes his "Red Cadillac" tune from a few years ago, and sings a cool duet with fellow Mississippian Eden Brent.  He also covers Sam Cooke, Jackie Wilson, and the Rolling Stones.....how's that for diversity??!!!  He's backed by one of the best bands in the business, The Rays.  If you're a longtime Rawls fan, you already have this, but if you dig soul blues and don't have it, you are missing out on one of the best. 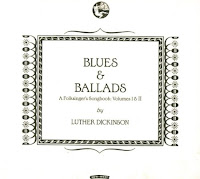 Luther Dickinson - Blues & Ballads:  A Folksinger's Songbook, Volumes I & II (New West Records):  I have to admit that I was a bit late to the music of the Dickinsons.  I usually only have time to listen to what I'm sent for review and I've never received any of their recordings.  However, I've heard their work on several collections that I've reviewed and I did get to review Make A Move by the Hill Country Revue a few years back.  When I got to go see the North Mississippi Allstars perform at the MSU Riley Center with my youngest daughter last year, I was blown away.  It was one of the best performances I'd ever seen, so I snatched up a copy of their North Mississippi Allstars album, World Boogie Is Coming, at their merchandise table and was blown away again.  Needless to say, I got a little hop in my step when Luther Dickinson's new CD arrived in my mailbox a few weeks back.

When Dickinson, the son of legendary producer/performer Jim Dickinson, was growing up, he began collecting old hymnals and songbooks, spending hours trying to figure out the music, sometimes memorizing them.  The songbook concept is the actual concept of this album.  In the electronic age, songbooks are fast dying out as a musical tradition, but Dickinson has kept notes and lyrics and ideas, drawings, and whatever else came to mind.  Copies of these notes are included with the album (see below).

The songs here are songs written by Dickinson over the years, or variations of songs he learned from family and friends over the years.  This is a beautiful piece of work that serves as a capsule summary of American music over the past hundred years or so.  It follows the path of most of Dickinson's other work, taking older traditional music and updating it to appeal to fans both old and new.  He's joined on these tracks by a fine band, including Memphis legend Charles Hodges (B3, piano), guitarists Alvin Youngblood Hart and Jimbo Mathus, singers JJ Grey and Mavis Staples, and Sharde Thomas, granddaughter of Otha Turner, who plays fife, drums and contributes vocals on numerous tracks.  This is a real treasure that both blues and roots fans will want to get their hands on.  Can't wait for future volumes. 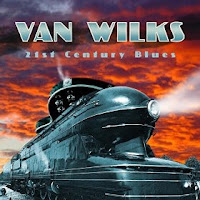 Van Wilks - 21st Century Blues (Texas '51 Records):  Guitarist Wilks has been a part of the Austin music scene since the 80's, recording for Mercury Records in the late 70's and intermittently since then.  He's a multiple award winner, winning best electric and acoustic guitarist in the Austin Chronicle's Reader's Poll, and he's a member of the Texas Music Hall of Fame.  This is his first studio release in 10 years and it's not unlike the locomotive pictured on the album cover.

There's a dozen tracks here, most in the stellar Texas blues rock tradition of bands like ZZ Top.  Coincidentally, ZZ Top frontman Billy Gibbons and Wilks are longtime friends and collaborators, having co-written "Drive By Lover<' which appeared on ZZ Top's La Futura album in 2012 (and appears here also).  Gibbons appears on the track and there are also appearances by Christopher Cross (yes, the early 80's Grammy winner) and former Storyville frontman Malford Milligan.  Wilks sounds a lot like Gibbons on vocals, but he is very much his own man on the guitar with some monster work here.  He mixes in a few ballads and pop rockers as well, demonstrating his versatility.  Blues rock fans, especially those who like ZZ Top, will love this release. 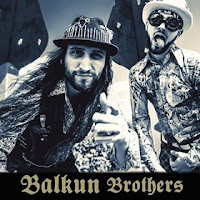 Balkun Brothers - Balkun Brothers (Dixiefrog Records):  Last year, I sung the praises of the Balkun Brothers' debut release, ReDrova.  Well, they're back in less than a year's time with this self-titled follow-up.  They're now a duo (guitarist Steve Balkun and drummer Nick Balkun), but it doesn't matter a bit.  They continue their dynamic and relentless mix of Delta and Hill Country blues, funk, and rock in a Led Zeppelin/Hendrix vein.

These two guys ain't playing around, Steve Balkun is a masterful guitarist and powerful vocalist and Nick Balkun is a monster percussionist.  They've brought on Popa Chubby as producer to enhance their sound and, good as their debut was, this release is even better.  There's no let-up whatsoever in these twelve tracks (eleven originals, one excellent cover....of Johnny Winter's  "Mean Town Blues").  Good as ReDrova was, this self-titled sophomore effort is even better.  There's plenty of great music here for blues, rock, and blues rock fans. 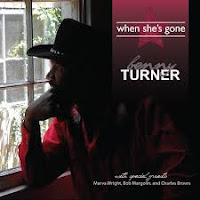 Benny Turner - When She's Gone (Nola Blue, Inc.):  Turner is a 50-year vet of the music scene.  The brother of the late guitarist Freddie King, he learned to play guitar from their mother, Ella Mae (King) Turner and her brothers, and honed his chops playing for the gospel group The Kindly Shepherds in the late 50's, followed by a decade-long stint with his brother, which led to 20 years as bandleader for the late New Orleans R&B star Marva Wright.  On his own, Turner has released four albums, including his well-received, but currently out-of-print 1997 debut, Blue and Not So Blue.

Turner's new album includes six tracks from Blue and Not So Blue, and they include appearances from Ms. Wright, Dr. John (on guitar), and the late Charles Brown on piano, playing in what were probably some of his last recordings before his death in 1999.  The four new tracks are all covers of blues classics, a couple of which feature Bob Margolin on guitar.  Turner himself plays lead guitar (and lead bass guitar on a couple of other tracks) on the Jimmy Rogers tune "That's All Right," and Brown appears on a fantastic reading of "Black Night," which was recorded in '99, but was believed to be lost during Hurricane Katrina.   Turner has a fine voice that's comfortable singing blues and soul and this one will satisfy fans of both genres.

That's all for now.  Check back soon for more New Blues For You. 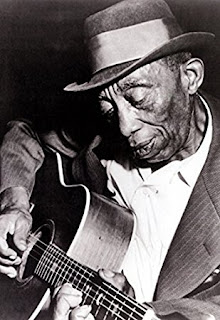