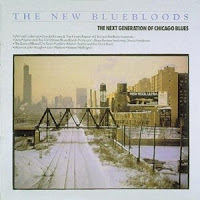 Picking up where we left off with last week's post, we will look at what was Side Two of The New Bluebloods, looking at each song and the performers then and now.  On compilations of this type, which aim to showcase "the next big thing" in their respective musical genres, it's always interesting to see how accurate things turned out to be.....who actually did hit it big and who didn't for whatever reasons.  Last week saw a couple of groups who have done pretty well for themselves (The Kinsey Report and the Sons of Blues/Chi-Town Hustlers), one who has struggled (Dion Payton), and a couple whose careers were cut short due to tragedy (Valerie Wellington and Professor Eddie Lusk). 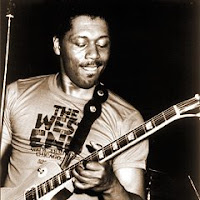 First up today is John Watkins.  I have to say right now that Watkins' selection, "Chained To Your Love," was my favorite song on the album.  I really liked his soulful vocal on this slow burner and his guitar work was just perfect.  Of course, it doesn't hurt a bit that he's backed by Jimmy Johnson, his uncle.  At the time, Watkins was a member of Johnson's band, so the rest of the backing band is Johnson's as well and they provide great support.

Watkins released his own recording in the early 80's for the French Blue Phoenix label (Here I Am) and I heard some of the selections on a Johnson disc from around the same time.  That was all the music that I heard from him, but it was enough to make you want to hear more.  Besides working with his uncle, Watkins also worked James Cotton with Willie Dixon off and on until Dixon's death in the early 90's.  Soon after, Watkins dropped off the Chicago scene and relocated to Detroit and still performs from time to time.  I recently located him on Facebook and he reported that he is doing fine and that he does have some music up on YouTube, so check him out there. 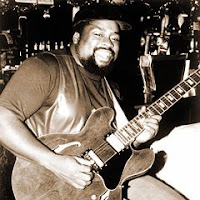 Michael Coleman was 30 when The New Bluebloods was released, but the guitarist was backing singer Johnny Christian at 11 and later backed James Cotton for seven years.  He also played guitar on Syl Johnson's hit, "Ms. Fine Brown Frame," in 1982.  His track, the somewhat controversial "Woman Loves A Woman," was a remake of a song he had produced for singer Jerry Tyrone.

Coleman enjoyed a measure of success in the 90's and early part of the 2000's, recording two albums for Delmark and several for European labels including Wolf and Black and Blue Records, but he began having some health problems....diabetes related to his excessive weight.  He lost 150 pounds and restarted his career.  He's also battled kidney failure and requires dialysis.  Recently, Coleman underwent heart surgery, but has recovered sufficiently to start back performing in the Chicago area.  You can't keep a good blues man down. 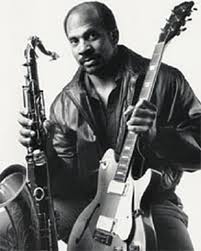 Maurice John Vaughn started playing in Chicago as a teenager in the  late 60's with several R&B bands, playing saxophone.  He also played guitar and keyboards, plus he was an excellent singer.  Phil Guy took notice in the late 70's and recruited him for his band, and he later recorded with Phil and his brother Buddy for JSP in the UK.  Vaughn also played behind Son Seals, Luther Allison, Valerie Wellington, Junior Wells, and A.C. Reed, with whom he recorded I Got Money for Blue Phoenix in the mid 80's.

Prior to recording "Nothin' Left To Believe In" for The New Bluebloods, Vaughn released the innovative Generic Blues Album on his own label, Reecy.  The album covered was done in the design used in the 80's for generic products sold in stores and Vaughn sold it from the bandstand almost exclusively until Alligator reissued it a few years later.  Vaughn later recorded a follow-up for the label, and then a disc for Blue Suit Records in 2001.  He also worked A&R and as a producer for Appaloosa Records in the 90's and also played behind Detroit Junior for most of the decade.  He is still active in the Chicago area, fronting his own band these days. 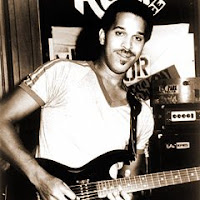 Guitarist Melvin Taylor was born in Jackson, MS, but moved with his family to Chicago when he was three.  He strapped on his first guitar at age six, learning to play from his uncle, so you could probably say that he was a prodigy.  He learned to play guitar listening to records by B.B. King, Jimi Hendrix, and Albert King.  Over time, he was also influenced by jazz guitarists like Wes Montgomery and George Benson, and soon was acknowledged as one of the most technically proficient guitarists in the blues.

Taylor had actually released two albums before The New Bluebloods, both on the French label Isabel (these discs and most of the other French releases mentioned are now available stateside, courtesy of Evidence Records).  His contribution was "Depression Blues," on which he gives quite a guitar clinic.  Taylor has enjoyed a fairly successful recording career, releasing four subsequent albums on Evidence to go with his two early 80's reissues.  After an eight year absence from the studio, he has released two albums, including a double CD set, on the Eleven East label.  He also continues to be in demand as a live performer. 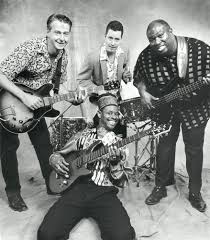 The last artists featured on The New Bluebloods turned out to be the most successful.  Lil' Ed and the Blues Imperials stopped by the studio, intending to record one track for the anthology, but ended up recorded over 30 songs that night and have been with the label ever since, racking up eight big recordings over the past 26 years.  Ed Williams and his band were one of the most popular bands in the Windy City during the mid 80's.  Williams was a nephew of slide guitar master J. B. Hutto and sounded a lot like him on guitar and vocals, but he also owed a lot to the styles of Elmore James (what slide guitarist doesn't) and Hound Dog Taylor.  Lil' Ed and band combined for a raw and raucous style with Williams sliding around and sometimes riding on people's shoulders while playing.

Their track was a great one to close the disc, "Young Thing," an energetic exuberant good-time tune that makes you happy even though it didn't work out for Lil' Ed and his lady.  Ten of the tracks recorded on that night ended up comprising their Alligator debut, Roughhousin', and as mentioned, the band has gone on to release seven more albums of their wild and crazy music.  Their sound doesn't vary from disc to disc that much, but much like the late Magic Slim, you can start listening to Lil' Ed and the Blues Imperials in the middle and work your way out both ways.


So there you have it....a summary of one of the better Chicago Blues anthology sets in the past 25 years.  Like most new talent releases, you have some that met with success, some that struggled or faded from the scene, some whose lives were tragically cut short, and some that have showed resilience and fought their way back after overcoming adversity....not too different from life itself when you think about it.  If you're a blues fan, you're probably familiar with some of these artists, but you owe it to yourself to go back and pick up on the ones that you might have missed.  They're all well worth hearing.