Earlier this week, a Clarksdale, MS institution passed away.  Johnnie Billington, bluesman, singer, auto mechanic, and most importantly, teacher, died on Monday, April 1st, in a Clarksdale hospital.  Mr. Billington suffered a heart attack a few weeks ago and never recovered.  He was in his late 70's.  Billington taught many of Clarksdale's latest generation how to play the blues....Terry "Big T." Williams, Anthony "Big A" Sherrod, Lee Williams, and many, many others.

He was born in Panola County in 1935, in Crowder, MS.  His father was a sharecropper, and he grew up farming, too.  When he was ten, his dad bought him a guitar and he taught himself to play while listening to the musicians on the radio show, King Biscuit Time.  By the time he was a teenager, he was playing with a band throughout the Delta.

Billington left the Delta in 1954, winding up in Chicago, where he worked at several different automobile plants during the day, and played the blues at night, sometimes crossing paths with legends Muddy Waters, Earl Hooker, and Elmore James.  He eventually opened his own auto repair shop in Robbins, IL.

By the late 70's, Billington had returned to Mississippi to help care for his ailing mother.  He opened an auto repair shop in Clarksdale, but noticed that a lot of the children in the area had very few opportunities for advancement.  He began opening up his shop at night and teaching these kids to play the blues, using the shop as a rehearsal site. 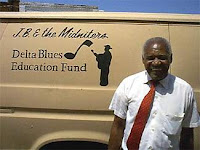 Billington was able to expand his efforts through grants made available by the Mississippi Arts Commission, and by the early 90's, he had established the Delta Blues Education Fund (DBEF), which was a non-profit that offered a year-long blues music instruction program for Delta youth free of charge.  He was able to work with these kids, forming them into bands, teaching them songs and how to play and work together.


He also taught them important life lessons, like learning to be prompt, to dress neatly, how to conduct themselves, and to take pride in their accomplishments.  He even found them places to perform in public, sometimes letting them back him as part of his band, J.B. and the Midnighters, at his gigs around town.

He received many honors for his work with kids, including, appropriately, The Blues Foundation's Keeping the Blues Alive Education Award.  He was also awarded the Artist Achievement Award from the Governor's Awards for Excellence in the Arts in Mississippi.


Roger Stolle of Cat Head said it best in an article in the Clarion-Ledger published after Billington's death....."So many people talking about keeping the blues alive....he's been doing it for decades.  He literally kept the blues alive here when it just was not thriving."  Now, thanks to "Mr. Johnnie," blues lovers have a great opportunity to hear the blues on a nightly basis when they come to Clarksdale.  He trained and influenced scores of local musicians there, ranging from kids to 50+ years old.

Anyone who is a fan of the blues, especially the Mississippi Delta Blues, owes a huge debt of gratitude to Johnnie Billington.  He really did keep the blues alive.