I'm on the road this week, attending a meeting, so I'm blogging from a hotel room this week.  Needless to say, I don't have many resources at hand, so this may be a short post.  I think we'll be looking at a couple of items of interest, plus a few new releases. 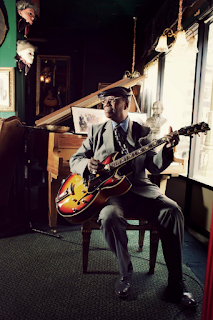 Johnnie Bassett passed away this weekend at the age of 76, from liver cancer.  Bassett was a mainstay of the Detroit blues scene since the early 50's, primarily working as a session guitarist for Detroit's Fortune Records, and leading his own group, Joe Weaver and the Bluenotes.  He also backed Nolan Strong, Andre Williams, and The Miracles (he played on their first single, "Got a Job"), as well as John Lee Hooker, Dinah Washington, and Little Willie John.

In the late 90's, he emerged as a front man on several successful albums for Fedora, Black Magic, and Cannonball, where he recorded one of his most familiar tunes, "Cadillac Blues."

After Cannonball folded, Bassett didn't return to the studio until 2009, but he was able to release two more discs......the last one, I Can Make That Happen, being released just a month ago.

I haven't heard his last couple of releases, but I heard all of his 90's material and I loved his laid-back, almost jazzy style, mixing T-Bone Walker/B.B. King-style guitar with his deep, mellow vocals.  I remember seeing him years ago at the Handys in Memphis (around '99).  He played "Cadillac Blues" at the Orpheum and sounded great.  As my brother and I were leaving, we were walking behind him as he was walking out.  He was holding his guitar case in one hand and his wife's hand in the other.  He will be much missed on the Motor City blues circuit.

We'll be looking at some big new releases over the next few weeks, but this week, check out these mini-reviews.  As always, check out the upcoming issue of Blues Bytes for more details about these discs. 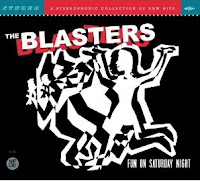 The Blasters were a force of rock and roll nature in the early 80's, with their retro mix of rock, blues, R&B, and country.  In the mid 80's, one of the founding members and principal songwriter, Dave Alvin, left for a solo career, and the band split shortly after.  They reformed around 2002 and have released a couple of albums.  Fun On A Saturday Night (Rip Cat Records) is their first in eight years.  It's a fun romp, with more of a focus on the blues than usual, with songs like Magic Sam's "Love Me With A Feeling," Sonny Boy Williamson's "No More Nights By Myself," and Tiny Bradshaw's "Well Oh Well."  There's also a cool redo of the Johnny Cash/June Carter duet, "Jackson," with X's Exene Cervenka joining Phil Alvin on vocals.  This is a fun disc that could only be better if it was longer. 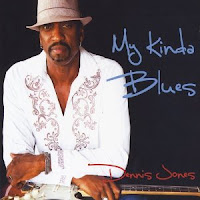 I don't understand why the Dennis Jones Band isn't a bigger deal.  The trio plays some powerhouse blues/rock, Jones is a charismatic singer and guitarist, and he writes some very good songs that are sometimes topical, sometimes humorous, and always blues-oriented.  If you give it a chance, you will find that his latest release, My Kinda Blues (Blue Rock Records), is probably your kind as well.  The band rips through a rousing set of original tunes, plus a great Chicago-style cover of the late Dave Thompson's "You Took My Baby."  Guest artists Kenny Neal and the great Guitar Shorty also stop by to lend a hand, but this is Dennis Jones' show.  If you like this new release, check out Jones' previous work, plus his new DVD, Live at the Temecula Theater. 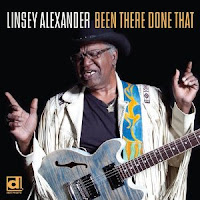 For anybody who says the Chicago Blues are fading away, I present to you Linsey Alexander.  The Mississippi native was raised in Memphis, and learned to play guitar from listening to Little Milton and B.B. King records and migrated to Chicago in the late 50's, working mostly on the South Side.  He's played with an All-Star cast of musicians, including King, Little Milton, Bobby Rush, Buddy Guy, Magic Slim, Byther Smith, Otis Clay, and Larry McCray.  His debut for Delmark, Been There Done That, is his best yet.  In fact, this is one of the best Chicago Blues albums I've heard in a while.  Alexander has a warm vocal style, his songs are good, and he's a strong guitarist.  Delmark has been on a roll with their latest run of releases, and Been There Done That continues the hot streak.