The Ace of Spades

On Monday, I received the new Johnny Rawls CD, Soul Survivor, in the mail for review.  Rawls' old school soul blues is a longtime favorite of mine, and his new CD is typically fantastic and essential listening for blues fans.

One of Rawls' mentors is the great soul singer, O. V. Wright....Rawls served as his bandleader for most of the 70's, and usually tries to include at least one O.V. Wright song on his albums, therefore serving a dual purpose, reminding old Wright fans of the past glories of their hero and introducing scores of new fans to the catalog of one of the greatest soul singers of all time.

Overton Vertis Wright was born in Leno, TN in 1939.  He got his start, like most young black singers at the time, in gospel with groups like The Sunset Travelers and The Harmony Echoes, who also boasted James Carr as a member.  Wright and Carr was both discovered by Roosevelt Jamison.  Jamison, who worked in the medical research field, was a budding songwriter and manager of some local Memphis groups.  He wrote Wright's first secular single, "That's How Strong My Love Is," for Goldwax Records in Memphis.  Wright's passionate reading was unfortunately eclipsed by Otis Redding's version....Redding liked the song so much, he decided to record it himself, taking the wind of Wright's sails (and sales).  However, Wright's version is superior in every way except record sales.

To make matters worse, The Sunset Travelers recorded for Peacock Records, and the ever-opportunistic Don Robey filed a lawsuit against Goldwax, claiming that Wright was still under contract to Peacock as a member of the Travelers.  Robey won the lawsuit and Wright moved to the Peacock subsidiary, Back Beat, where he recorded classic tunes like 1965's "You're Gonna Make Me Cry."  The songwriters for Back Beat stumbled onto a winning formula for Wright, combining the pain of the blues with the upbeat job of gospel music.  Wright was the perfect outlet for this formula, because he never held anything back on his performances.  Another stellar performance from this period with Back Beat was the dramatic "Eight Men, Four Women," from 1967.

In 1967, Wright began a collaboration that would last the rest of his life, teaming with Memphis producer/songwriter Willie Mitchell.  While it was unusual for Robey to allow anyone outside of his Houston base to work with his artists, the collaboration with the legendary Mitchell had to have been a no-brainer.  The Wright/Mitchell team was responsible for hits like "Gonna Forget About You" (later recorded by Robert Cray), the goose bump-inducing "Born All Over" (written by Johnny Copeland), "Ace of Spades," and what may be the ultimate O.V. Wright tune, "A Nickel And A Nail," a song which should be on the short list of greatest soul tunes of all time. 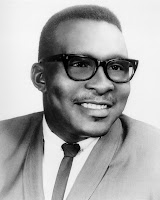 An extension of the Wright/Mitchell collaboration was Wright's regular recording rhythm section, which would later make up the Hi Records Rhythm Section, Howard Grimes (drums) Teenie Hodges (guitar), Leroy Hodges (bass) and Charles Hodges (keyboards).  This quartet would make their mark on dozens of soul classics of the 70's.  Wright's final output for Back Beat in 1973 included "Drowning On Dry Land" and "I'd Rather Be Blind, Crippled, and Crazy."


Mitchell had begun working for Hi Records as producer/songwriter/performer, while doing the same for Robey at Back Beat.  When the label owner passed away in 1970, Mitchell found himself running the label, which worked out well for him, since he had signed Al Green the year before.  Soon, Wright was a part of Hi as well, joining an All-Star line up that included Green, Otis Clay, Syl Johnson, and Ann Peebles.  Wright continued his string of powerful soul classics for Hi, recording songs like "I Don't Do Windows" and the unfortunately titled "Into Something (Can't Shake Loose)."

In the late 70's, Wright went to jail on drug-related charges and his career never really got back on track after that.  Truthfully, the modern sound of soul of the mid 70's was not a perfect fit for Wright's raised-in-the-church rawness, but the drugs caused his health to deteriorate as can be seen in pictures taken of Wright during that time period.  In 1979, Wright underwent heart surgery and his doctor told him he could live another one to three years.  Unfortunately, he barely made it a year, dying in Birmingham in an ambulance after suffering a heart attack.  He was 41 years old.

O. V. Wright continues to serve as a musical influence for many soul/blues singers, including Rawls, Robert Cray, Otis Clay, Billy Price, Tad Robinson, and many others.  Here's some recommended listening.... 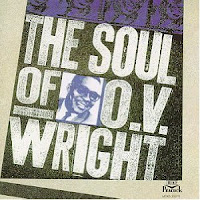 The Soul of O. V. Wright (MCA) - This single disc set collects the best of Wright's Back Beat recordings, from around 1965 to 1973.  Nearly all of Wright's standout tunes are included in this 18-track set.  There was a box set of Wright's entire output for Back Beat a few years ago, but it's out of print and costs an arm and a leg.  This is the best place to start with O. V. Wright though.  He's at the top of his game on these tracks. 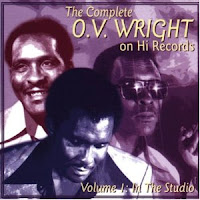 The Complete O. V. Wright on Hi Records - Volume 1: In the Studio, Volume 2: On Stage (Live In Japan) (Hi Records UK) - Wright's Hi material is considered to be of lesser quality than his work for Back Beat, but while the styles had changed somewhat, Wright still brought that same passion and intensity to his later recordings.  He was also a big favorite in Japan, so there were a couple of recordings made while he toured there, and there's absolutely nothing wrong with those performance at all.  Pick up the Back Beat sides first, but these later recordings are still top of the line and show that even with his personal issues in the late 70's, Wright still had plenty in the tank. 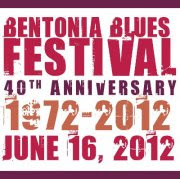 A little reminder about one of the best little blues festivals in Mississippi taking place this weekend in Bentonia.  The festival is hosted by Bentonia resident and Broke and Hungry recording artist Jimmy "Duck" Holmes.  This year, the festival's 40th, Holmes moved the festival from downtown Bentonia to Holmes' farm just north of town.  The line-up is outstanding this year, as always, with great local talent....Bill Abel, Terry "Harmonica" Bean, Lightnin' Malcolm, Roosevelt Roberts, Scott Hales, and Super Chikan will be there to close things out on Saturday night.  You can find out more (including directions to Mr. Holmes' farm) at the Festivals' Facebook page.