Aaron Thibeaux Walker was born in 1910 in Linden, Texas.  Both of his parents were musicians.  As a young boy, he moved with his mother to Dallas because she didn't want her baby limited to working in the fields all his life.  In Dallas, he lived in the Oak Cliff section of town and he was exposed to the music of Huddie Ledbetter (Lead Belly) and Blind Lemon Jefferson, who Walker often led around to play the streets of Dallas for money.  When he was ten, he performed with a local family band, dancing and singing, and proved to be a natural showman.  When he was twelve, his mother bought him a banjo, his first instrument, and he eventually made enough money playing church socials on weekends to buy his own guitar.
﻿
Stylistically, Walker was influenced on the guitar by Jefferson, Lonnie Johnson, and Scrapper Blackwell.  As a vocalist, he was influenced by the great Leroy Carr, who often teamed up with Blackwell on recordings before Carr's untimely death in 1935.  All of these artists were a bit more sophisticated in their styles than the traditional blues artists of the day.  Walker would take what he learned from them to a whole new level.

By the late 20's, Walker won an amateur show with the prize being a week's work with Cab Calloway's band.  Calloway allowed the youngster to have a solo spot in the show, where Walker played banjo and did splits.  During this time, he attracted the attention of a Columbia Records talent scout and was able to record two songs on guitar (as Oak Cliff T-Bone), "Wichita Falls Blues" and "Trinity River Blues," neither of which made much of an impact at the time.  He played in a 16-piece band in Dallas until 1934, when he moved to Los Angeles, where there were greater opportunities.  He turned his Dallas job over to Charlie Christian, with whom he had previously performed in the Dallas streets when both were teenagers. 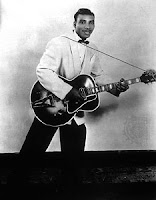 Walker played with several different combos on the West Coast before joining Les Hite's Cotton Club Orchestra in 1939, serving as a singer, guitarist, and composer.  Around this time, several guitarists were starting to play electric guitar in bands because they could see the advantages of the guitar being turned up to compete with the full horn sections they were playing with.  Walker, Christian, Eddie Durham, and Floyd Smith all were playing electric guitar at that time, but Walker always insisted that he was playing it four to five years before anybody else picked it up.

Whoever was first, it was Walker who made the greatest impact.  On his first recording, "T-Bone Blues," with Hite's orchestra backing him, he didn't even play guitar (Frank Pasley played a Hawaiian style lead).  When he signed with Capitol Records in 1942, listeners got their first listen at Walker's fluid, elegant, single-string playing on songs like "Mean Old World" and "I Got A Break Baby."  Check out "Mean Old World," from way back in 1942. 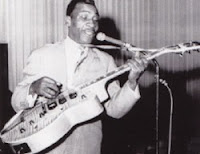 Walker's music mixed the grittiness of blues with the elegance of jazz to produce a new sophisticated urban blues style.  Walker usually recruited jazz musicians in his band, with the exception of the piano player, where he preferred a bluesman.  His playing style was also unusual.  He played a hollow-body Gibson, held straight out from his chest, parallel to the floor.  This contributed greatly to his unique tone.  He would also play behind his back, between his legs and even doing splits to get his audience on their feet. 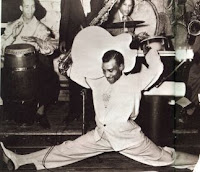 In 1946, Walker signed with the L.A. label Black & White, and proceeded to release an incredible body of work, like "T-Bone Shuffle," "West Side Baby," and "Bobby Sox Blues."  However, the song that he will forever be identified with was also recorded initially at Black & White, the timeless "Call It Stormy Monday."  This song has probably been done by more blues artists than any other.  Even though there are some other famous versions of this song on record by artists like Bobby "Blue" Bland, Junior Wells, and the Allman Brothers, Walker's version is the gold standard.  When B. B. King heard "Stormy Monday," he was inspired to go out and buy a guitar.  Here's the original version, recorded in 1947.


In 1950, Walker signed with Imperial Records and added even more classic standards to his already impressive body of work.  Songs like "Glamour Girl," "The Hustle Is On," "Blue Mood," and these two tracks......the jumping instrumental "Strollin' With Bones," where Walker gets to put his dazzling guitar on full display, and the immortal "Cold, Cold Feeling."

His last truly great recordings were for Atlantic Records.  Collected on the album, T-Bone Blues

, it finds Walker not only playing with his L.A. bandmates, but there's also a set of tunes recorded with Chicago bluesmen Jimmy Rogers and Junior Wells that work very well.  Recorded over three sessions between 1955 and 1957, this album remains one of his most popular.  Two of the more impressive tracks are "Two Bones and A Pick," a stunning instrumental featuring Walker (third solo) with R. S. Rankin (first solo, also known as T-Bone Walker Jr., Walker's nephew) and jazz guitarist Barney Kessel (second solo), and "Why Not," a bonus cut not on the original CD, from the Chicago session and later the inspiration for Jimmy Rogers' Chess hit, "Walking By Myself."

Walker's catalog gets a bit spotty after that.  Unfortunately for him, and many other blues artists, the rock & roll revolution hit pretty hard and Walker's smooth, sophisticated urban blues fell out of favor.  He did get involved with the American Folk Blues Festivals in the 60's that were so popular in Europe, appearing with many other great American blues artists.  Below is a magnificent clip of Walker playing a solo version of "Don't Throw Your Love On Me So Strong," from one of the festivals.

, which effectively gave his music more of a modern soul edge), but for the most part, they paled in quality compared to his material of the 40's and 50's, although I Want A Little Girl

, recorded for France's Black and Blue label,  and later released in the U.S. by Delmark, is first-rate and even features Walker playing piano on a couple of tracks.  There were also a couple of discs on the Bluesway label that kept his name in the record stores during the 60's and early 70's.

In 1980, Walker was inducted into the Blues Hall of Fame and in 1987, he was inducted into the Rock and Roll Hall of Fame.  There is no way to put into words the impact that T-Bone Walker made on not just the blues, but on jazz and rock and roll.  He singlehandedly made the guitar a lead instrument and laid the foundation to the way blues lovers play and hear the blues today.  Below are some great places to start listening to T-Bone Walker if you're interested. 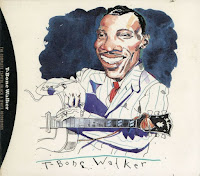 - a 3-disc set that captures the very beginnings of Walker's career, beginning with his early 40's recordings with Les Hite's band in tow and going through the late 40's, taking in "Mean Old World" and "Call It Stormy Monday."  True, sometimes the alternate cuts make listening a little tedious, but it's still a great listen if you can track it down. 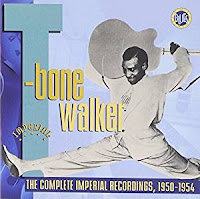 The Imperial Recordings - a 2-disc set that takes in the early 50's recordings.  There are some great tracks here, including many with backing from New Orleans R&B pioneer Dave Bartholomew leading the band. 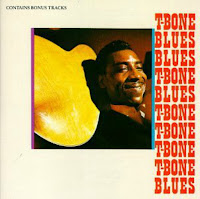 - If you can only get one disc of T-Bone Walker, this is not a bad one to choose.  Part of the disc features Walker with Chicago's finest and the rest showcases a super L.A. band.  There are also some solid remakes of early Walker hits and some sizzlng instrumentals. 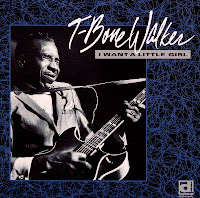 I Want A Little Girl

- This is the last really good T-Bone Walker album.  There are some great after-hours blues here.....nothing spectacular, just a solid set of urban blues, tastefully done. 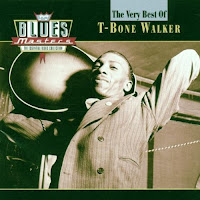 The Very Best of T-Bone Walker

- Part of Rhino's Blues Masters series, this single disc set hits the high points of Walker's recording output and is a great starting point for newcomers.
Posted by Graham at 12:01 AM