One of the more confusing aspects of the blues for newcomers is the question of which Sonny Boy Williamson is which.  Most blues fans become familiar initially with Aleck "Rice" Miller, the Sonny Boy Williamson who recorded for Chess Records, and whose songs have therefore been released and re-released over the past twenty to twenty-five years.  He's the one who played with the Yardbirds in the 60's, who influenced performers ranging from Junior Wells to Van Morrison to John Popper, and who recorded such future blues standards as "One Way Out," "Don't Start Me To Talkin'," "Eyesight To The Blind," "Help Me," and "Nine Below Zero."

However, Miller is the SECOND Sonny Boy Williamson.  The first Sonny Boy Williamson was just as influential to an earlier generation of musicians.  Born John Lee Williamson in 1914, he is considered by many to be the father of modern blues harmonica, as he was the first to make it a lead instrument and feature it on his recordings.  He was no slouch in the blues standard department either, introducing songs like "Good Morning, Little School Girl," "Sloppy Drunk," "Shake The Boogie," "Sugar Mama," and "Early In The Morning" to the blues world.  Naturally, he was also a major influence on many of the earlier blues harmonica players, such as Billy Boy Arnold, Snooky Pryor, Little Walter, and Junior Wells, as well as artists like Muddy Waters and Jimmy Rogers.

John Lee Williamson began recording in the late 30's and had built an impressive catalog of recordings by the early 40's for Bluebird Records.  He also recorded as a sideman with Robert Nighthawk, Tampa Red, Big Joe Williams, and Big Maceo, but he was very popular on his own as an artist, probably one of the most popular blues artists during the 40's. 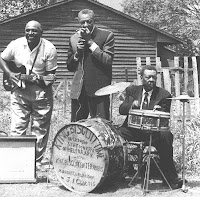 Rice Miller was a street musician from the 20's until the 40's, playing throughout Mississippi and Arkansas, sometimes with Robert Lockwood, Jr, beginning in the mid 30's.  He was quite an entertainer, playing with no hands and sometimes playing with one end of the harmonica in his mouth.  He was hired with Lockwood in 1941 to play on the King Biscuit Time

radio show on station KFFA in Helena, Arkansas, and to pitch King Biscuit baking flour.  They actually played for free in exchange for plugging their upcoming appearances throughout the area.

It was during this time that Miller was dubbed "Sonny Boy Williamson" by program sponsor Max Moore.  Moore thought using the name of a popular, but faraway musician would help boost sales.  Miller didn't actually like the pseudonym at the time, since it cast aspersions on his own talent, originality, and identity, but later he would claim that he was the first to use the name.

John Lee Williamson certainly disliked the pirating of his name.  According to Lockwood, Williamson made a trip down to the Delta to confront Miller and put an end to the imposter, but Lockwood recalled, "Big Sonny Boy (Miller) chased Little Sonny Boy (Williamson) away from there."  Williamson never took any legal action against Miller, probably because Miller never released any recordings during Williamson's lifetime and because Williamson played mainly around Chicago, while Miller confined his playing to the Delta area until after Williamson's death.

Miller's King Biscuit Time served as a springboard for lots of blues talent, including B. B. King, who made his radio debut on the show.  Other blues legends, like Elmore James, Houston Stackhouse, Robert Nighthawk, and Pinetop Perkins also appeared on the show.  Miller later moved to West Memphis in the late 40's and worked on KWEM radio, selling Hadacol.

Unfortunately, John Lee Willliamson didn't live to see the end of the 1940's. On June 1, 1948, he was brutally murdered in a robbery as he walked home from a gig at the Plantation Club on Chicago's South Side, just a block and a half away from his home.  According to blues guitarist Lonnie Johnson, Williamson was stabbed seventeen times in the head with an ice pick.  He was only 34 years old.

In the 50's, Miller was finally recorded, as Sonny Boy Williamson, first for Trumpet Records out of Jackson, MS, then for Chess Records, where he enjoyed his greatest success, recording about 70 songs for Chess' subsidiary label, Checker.  His songs were often witty, often surreal, always entertaining.  He also boasted a fine studio band, usually consisting of Lockwood and either Luther Tucker or Matt "Guitar" Murphy on guitars, Otis Spann on piano, Willie Dixon on bass, and Fred Below on drums.

Miller journeyed to Europe in the 60's and became even more popular, even recording with some of the British musicians of the time (the Yardbirds, the Animals, Jimmy Page), though he was less than flattering in his descriptions of their abilities.  He even considered becoming a British citizen at one time, but he returned home to Helena to King Biscuit Time in the mid 60's.  He passed away in 1965, and is buried in Tutwiler, MS. 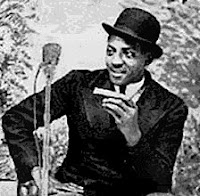 As far as who was the best of the Sonny Boys, most people agree that Rice Miller was the better performer.  As Lockwood said, "He (Williamson) couldn't play with Rice.  Rice Miller could play Sonny Boy's stuff better than he could play it!"  Willie Dixon concurred, saying, "I think Rice Miller was actually the better harmonica player and the better entertainer."  Listening to both performers, most listeners would agree, but John Lee Williamson's contributions should not be forgotten.  Of course, it's easy to say that without Sonny Boy I, there wouldn't have been Sonny Boy II (duh), but I think it's safe to say that if it weren't for John Lee Williamson and the path he laid, there would probably not have been a Rice Miller, or many of the other harmonica-playing legends of the blues.

Here's a chance for you to decide for yourself who you like best.  First up, here's Sonny Boy Williamson I's classic tune, "Sugar Mama," with guitar by Big Joe Williams.

Unfortunately, John Lee Williamson didn't leave behind any video of his performances, but since Rice Miller did travel to Europe and perform, we do have many clips of his performances.  Here's one of them from the American Folk Blues Festival in the early 60's.  Memphis Slim provides the introduction and Miller is backed by an excellent band consisting of the great Otis Spann (piano), Matt Murphy (guitar), Willie Dixon (bass), and Billy Stepney (drums).

Most of the first Sonny Boy Williamson's recordings are only available as imports.  However, in 2003, RCA reissued a volume of his Bluebird sides

, which is out of print, but still fairly easy to find at Amazon.  This set has a wide selection of John Lee Williamson's best tracks and terrific sound. 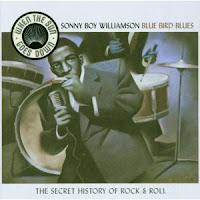 Rice Miller's recordings have been issued and re-issued on a regular basis since the mid 80's by MCA and now Universal Music.  Any of his work is worth having, but the best single volume is the 50th Anniversary of Chess Records edition called, naturally, His Best 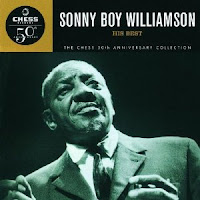