Several years ago, I took one of my daughters to the New Orleans Jazz Heritage Festival to see one of her favorite bands.  Some twenty years earlier, her mother and I were regular visitors to Jazz Fest, but had gotten out of the habit when additional responsibilities reared their head.  Things had changed a LOT since my last visit to the Fairgrounds in the mid 90's.......I don't think I'd ever seen as many people in one place in my life (I think attendance that day is still a Jazz Fest record) and there were a lot more major musical acts present than when I used to go.  It was really hard to work your way up to a stage to see an act.....luckily there were those huge jumbo-trons on most of the stages, so while we might have been a quarter mile from the stage, we were able to see who was actually on stage. 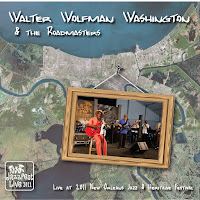 While we were wandering around trying to find a place for three people to stand for over five minutes (my sister went with us), I noticed a tent that was selling Live at Jazz Fest CDs, which piqued my interest.  One of my favorite things to do when I used to go to Jazz Fest was check out the Record Tent.  I had been to the Record Tent earlier and there wasn't much there that really interested me and most of it was oppressively expensive.  The Live at Jazz Fest Tent was quite different.  I had seen some Live at Jazz Fest CDs available at Amazon, but they were very expensive there.  At the tent, they were about the price of a regular CD, and there were a lot of them to choose from.....some artists had performances recorded during multiple years.  I grabbed CDs from two of my Louisiana favorites, Walter "Wolfman" Washington and Nathan and the Zydeco Cha Chas.  The sound was great on both of them, even though on one of the Zydeco Cha Chas' set, the vocal track was accidentally lost. 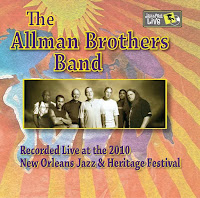 These CDs were also available on the Jazz Fest website, via Munck Music.  This company has recordings from Jazz Fest going back to 2008 (not all the bands, unfortunately, but a VERY nice selection).  There were also two sets recorded by The Allman Brothers Band from their 2007 and 2010 performances, so I picked these up last year (both are highly recommended).  While surfing Munck Music's site, I discovered that they had recorded most of the Allman's live performances since 2008, including their final recordings in 2014.  I filed that away for future reference.

This year, I finally decided to pick up the ABB's final-ever performance, at the Beacon Theatre in NYC on October 28, 2014.  I had read about the performance and decided that would be a good thing to pursue during the current situation.  It came in the mail a couple of weeks ago.

The band had decided earlier in the year to call it quits.......guitarists Warren Haynes and Derek Trucks both wanted to work with their own bands and Gregg Allman decided to tour with his own band as well (I got to see him in 2016, just before he had to pull out for health reasons.......he was pretty impressive).  The band always put together several multi-night performances at the Beacon, it was pretty much their second home during their "comeback," which lasted twice as long as their first run, and they were always in great form when performing there. 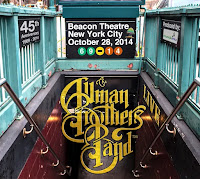 The set is a monster set, 28 songs and close to four hours long.  The band tore through nearly all of the blues classics that they introduced to many of their fans, "Statesboro Blues," "One Way Out," "You Don't Love Me," and "Trouble No More."  There were plenty of their own songs that their fans have grown to love....."Melissa," "Revival," "Dreams," "Black Hearted Woman," "Ain't Wastin' Time No More," "It's Not My Cross To Bear," "In Memory of Elizabeth Reed," "Whipping Post," "Blue Sky," "Mountain Jam" (with two reprises), "Hot 'Lanta," and "Midnight Rider."  There were also newer additions to the band's repertoire, "The High Cost of Low Living," Warren Haynes' ripping read of "Good Morning Little School Girl" and "The Sky Is Crying."

The band sounds fantastic......they certainly didn't go out with a whimper.  There was no let-up at all.  Haynes and Trucks were just incredible and if they didn't match the original twin guitars of Duane Allman and Dickey Betts, they were riding the bumper pretty closely.  The percussion team of Jaimoe, Butch Trucks, and Marc Quinones were just relentless, and bassist Otiel Burbridge's rumbling slippery rhythm work gave the old songs new life.  Gregg Allman was in great voice and his highly underrated work on organ was superlative, as always.  The band certainly went out on a high note. 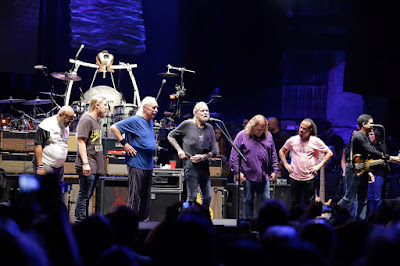 There's very little stage banter throughout the set.....fifteen to twenty seconds a spot.......until after the band returns for their first encore with, what else, "Whipping Post."  After that song concludes and the audience cheers for about two minutes, the band walks to the front of the stage.  Gregg gets a bit emotional as he recalls joining Duane and Dickey with no idea of what would be in store for him over the next 45 years.  He then tells the audience that the band would end their story by playing the first song they ever played together, "Trouble No More," and the band did just that.

I highly recommend this set to any fan of The Allman Brothers Band.  While there's a lot of the ABB's music at Munck Music's site, I encourage everyone to check out the company's other live recordings from Jazz Fest, the Peach Music Festival, the Dark Star Jubilee, the Wanee Music Festival, and many more.  I haven't heard a bad set yet.

Excuse me but did you really pay $479 for the ABB Live at The Beacon Recording?!