Well, it was bound to happen sooner or later, due to the wonderful Mississippi winter we're having (50 degrees one day, 85 degrees the next, cold and dry one day, rainy and humid the next), your humble correspondent is down with the sinus infection blues.  The following is an abbreviated version of FBF, but rest assured we will be back to full strength next week. 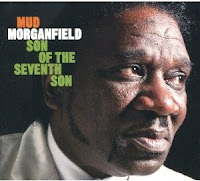 First up is the oldest son of a blues legend.....Mud Morganfield.  You know his dad as Muddy Waters, who dabbled in the blues for a few years.  The younger Morganfield has been playing music for a long time, having taken up the drums as a kid.  He even took up singing in the early 80's, but only stepped behind a mic after coaxing from singer Mary Lane in 2005.  He later appeared at the Chicago Blues Festival in 2007 to a rousing reception and the rest, as they say, is history.  He's built quite a following over the past few years, appearing at various festivals across the world, and he just released his newest recording on Severn Records, Son of the Seventh Son.  With powerhouse backing from harmonica player/producer Bob Corritore, keyboard wizard Barrelhouse Chuck, drummer Kenny "Beedy Eyes" Smith, and Harmonica Hinds, Morganfield has released a superb disc that captures and updates the best of the traditional Chicago sound.  Morganfield wrote most of the songs, and they are a strong set, but he does take time to cover one of Dad's favorites, "Can't Lose What You Ain't Never Had."  Not only does he look like his Dad.....he sounds a lot like him, too, which can never be a bad thing.  In this case, it certainly isn't.  This is a disc well worth having if you're a fan of the traditional sounds of the blues.  It's nice to know that Muddy Waters' kids (Mud and Big Bill Morganfield) are working hard to keep the blues alive. 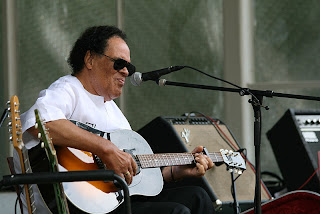 We must pay tribute to Louisiana Red, who passed away last Saturday at age 79, after suffering a stroke.  Red was one of the most prolific blues artists ever, starting his recording career in 1949, for Chess Records, then going on to appear on over 50 albums during his lifetime, including last year's Memphis Mojo, recorded in Norway with Bob Corritore and Little Victor's Juke Joint.  His raw and rugged sound never wavered over that span of sixty years plus, with powerful guitar work, warm and weathered vocals, and a composition style that could be best described as unique.  We may never see his like again and the blues is worse off for it.  R.I.P. Red.