My Favorite Things - Blues Around Midnight 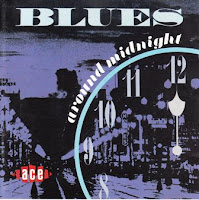 When I first started listening to the blues, I started receiving a catalog from Roundup Records in Cambridge, MA.  As I stated a few months ago, I found an ad in a Jazz Fest program for Roundup and mailed a request (remember those days) for a catalog.  When it came in the mail, it was almost overwhelming.  The number of recordings available was staggering.  I didn't know where to start, so I would try to order three or four at a time.  I was getting cassettes at the time, which made my choices a little easier since most of their stock (particularly the ones I'd heard of and wanted to buy) was either available on LP or CD (the story of my life).

About a year into collecting, I saw one particular album called Blues Around Midnight that featured songs by B.B. King, Ray Charles, T-Bone Walker, and Johnny Copeland.  It looked like mostly after-hours blues, maybe on the jazzy side, so I decided to order it, along with a few others.  Talk about a worthwhile purchase.  Not only were the above mentioned artists there, but many others that I'd never heard of, but liked just as much.  I've always been a sucker for anthologies because they feature so many different artists and a variety of tunes.  Even though many of these are usually budget collections, they almost always end up costing me more money because I have to track down releases from the previously unknown artists that I hear on them.

﻿﻿﻿ ﻿
One of the first posts I did on Friday Blues Fix was about Larry Davis, who was one of those most under-appreciated blues singers ever.  Davis was a triple threat talent....a wonderful singer in the B.B. King tradition, a strong guitarist in the Albert King tradition, and also a talented songwriter (composer of "Texas Flood," among others).  However, he was injured in a motorcycle accident just as his career was gaining momentum in the early 70's and was unable to perform for a few years.  Although he did record a couple of excellent albums in the 80's, they were few and far between.  When he finally did get a big break, recording for Rounder's Bullseye Blues label in the early 90's, he was unable to fully enjoy it because he died from cancer in 1994.  Davis had two tracks on Blues Around Midnight, including his impressive version of B.B. King's "Three O'Clock In The Morning," which opened the disc.

Johnny Copeland was a few years away from his success with Rounder Records when he cut "Old Man Blues," with backing from the Jazz Crusaders, better known by many jazz fans after they dropped the "Jazz" from their names and became known as The Crusaders.  The Crusaders, who ruled the Jazz air waves in the 70's with their soulful take on jazz, got their start as high school students in Houston, which is where Copeland hung his hat as well.  Copeland, of course, went on to greater success with Rounder, then later as part of the Showdown! collaboration with Albert Collins and Robert Cray, then finally cutting a few albums with Verve before passing away after complications from heart surgery in 1997.

﻿
Oklahoma native Lowell Fulson recorded the title track and was also the author of several other memorable blues standards, including "Reconsider Baby" (made famous by Elvis Presley), "Sinner's Prayer" (later done by Ray Charles), and "Tramp" (later covered by Otis Redding).  He also recorded definitive versions of "Blue Shadows," 'Every Day I Have The Blues," and "Black Nights."  Fulson continued to perform and record regularly until the late 90's, when his health began to fail and he passed away in 1999, after a successful five-decade career.


﻿﻿Jimmy Nelson was a star for a very short time.  He recorded the song, "T-99 Blues," which became a chart-topper in 1951 for RPM Records.  He never reached those lofty heights again, but recorded some quality material during his lifetime for other labels, like Chess and Music City.  He resurfaced in the late 90's with a fine recording for Bullseye Blues and continued to perform up until shortly before he passed away in 2007 at age 88.

﻿﻿﻿﻿
Jimmy Witherspoon is showcased on two tracks, including "Gee, Baby, Ain't I Good To You."  Witherspoon is considered one of the greatest of the post-war blues singers, but he was as comfortable singing jazz as he was the blues.   He started recording with Jay McShann's band in the mid 40's and his first big hit was the classic "Ain't Nobody's Business."  By the time the mid 50's rolled along, 'Spoon's brand of shouting blues was out of vogue, though he continued to record some great music for various labels, but got back on the map with a wonderful jazz recording in the late 50's from the Monterey Jazz Festival.  He also cut his finest record, "Evening Blues," with T-Bone Walker backing him on guitar in the early 60's.  He briefly retired from performing, but continued to record and worked as a DJ.  He later returned to performing and recorded several albums with artists like Eric Burdon and Robben Ford.  He contracted throat cancer in the 80's, which affected that powerful voice, but he continued to perform until his death in 1997 at 77.


﻿﻿﻿﻿﻿﻿﻿﻿﻿﻿Ray Charles cut "I'm Wonderin' and Wonderin'" in the early 50's, just before he hit it big with Atlantic.  In his early recordings, Charles was heavily influenced by Charles Brown, but on this track, while the Brown influence can still be heard musically, you can hear him slowly developing his own distinct style, especially on vocals.  From this point, the young singer progressed quickly, single-handedly (some say) creating soul music during his tenure with Atlantic, then making an amazing transition toward country in the 60's, then developing into a music legend from that point on.  On Blues Around Midnight, you get a glimpse of the early Ray Charles.


Since Blues Around Midnight contains tracks from Kent, Modern, and other labels, it's only natural that B.B. King should appear, since he spent many years during the 50's with Kent and RPM Records.  He gets a great pair of tunes on this set.  For my money, one of the greatest guitar solos ever kicks off "You're Breaking My Heart."  Your feelings may differ, but the opening thirty seconds or so still give me chill bumps some twenty-five years after hearing it for the first time.  I think every blues fan has a favorite B.B. King song and this one is mine.  Though King has had a lot of great years since, I have always thought that some of his best output was during those wonderfully productive years in the 50's and early 60's.

The set also features a previously unreleased track from T-Bone Walker from his nomadic period in the 60's, when he hopped from label to label.  As you can hear, though Walker had problems finding a permanent home after successful long term label associations in the 40's and 50's, the quality of his music was still first-rate.  Unfortunately, the times had changed and his style of blues was no longer as popular.  "Love Will Lead You Right" is as strong as anything he ever released and would have been a hit in a perfect world.

There are many other great tracks too, including a pair of songs from Frankie Ervin, who replaced Charles Brown in Johnny Moore's 3 Blazers.  Ervin's two tracks were the amusing "Dragnet Blues" (which drew the ire of Jack Webb, who sought a restraining order and wrecked the song's momentum on the charts) and the witty "Playing the Numbers."  Ervin had a star-crossed career in the 50's, serving as lead vocalist with the Shields after he left Moore.  He resurfaced in the 80's and 90's for a time, passing away in 2009 at the age of 84.

Ace Records has released many quality recordings from many genres of music for a long time.  There have been some fantastic compilations during that time.  Their recordings are highlighted by outstanding sound and some of the best liner notes you'll ever read, with loads of information about the featured artists from some of Britain's foremost blues scholars.

For blues fans who enjoy the late-night, after-hours, jazzy urban blues from the 50's and 60's, you won't find a better collection than Blues Around Midnight.  Unfortunately, it's out of print, but copies can still be found at various music sites, including a few listed in the links on the right sidebar.