Happy New Year To All 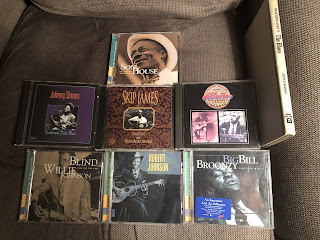 Well, as far as years go, 2020 was pretty much a stinker.  It was one of the toughest we've ever experienced around here and there have been some tough ones in recent years.  This year, my spouse has battled serious health issues which started around this time in the last year.  She's endured a lot this year, but she is bouncing back and doing well, so at least we are ending 2020 in better shape than we ended 2019 and hopefully, things will continue to improve.  For those who were aware of things, we appreciate all the good thoughts and prayers sent her way.  She is my rock and my reason to be and not only that, she enjoys the blues and has encouraged me to enjoy them as much as I possibly can over the years.
I apologize for the lack of posts over the past few weeks.  I don't get a lot of traffic on the site anymore, but I really appreciate what I do get and I know those who visit love the blues as much as I do.  I hope to have more time and to do much better in 2021.  The picture shows what I will be doing tomorrow to celebrate New Year's Day.  I'm still in an old blues mood and I have really enjoyed listening to these discs since the summer....believe it or not, I had not listened to much Big Bill Broonzy over the years, but based on what I've just been listening to, I will be finding more as soon as I can. 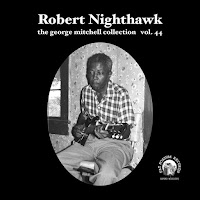 Meanwhile, my daughter and son-in-law gave me one of their record players.....the first one I've had since I was a kid.  They also gave me a few used albums to listen to for Christmas, but I also gave myself a Christmas present.....a 45 recording from Robert Nighthawk recorded by George Mitchell just three months before he passed away in 1967.  I wasn't sure what to expect, but he sounds just as good on these three tracks (Side A is "Canned Heat, Side B is "Nighthawk Boogie" and "Down By The Woodshed") as he did on all of his other recordings.  His slide guitar play just gives me goose bumps on my goose bumps. 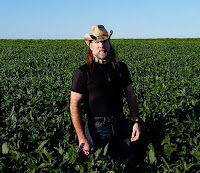 On a sad note, the blues world lost a good one on Christmas Eve, when Mississippi blues man Kern Pratt passed away.  He had been in ICU for a couple of weeks battling pancreatitis when he contracted COVID.  We reviewed his most recent release, the excellent Greenville, MS.....What About You? a few months ago, and he released a great single with Will Wesley, "A New Kind Of Blues," that addressed all of the madness and chaos that we all had to deal with last year.....it's a bit ironic now since that's what took him away from us.  I had recently contacted Pratt and we had discussed doing a Ten Questions With......post in the coming months, but he got sick a few weeks later.  He will be much missed on the Mississippi blues scene for sure.

Anyway, that's all for now.  Hopefully, we will have a Top Twenty List for 2020 in a few weeks and maybe pay tribute to those we lost over the past year, plus more correspondence in-between.  Have a Happy 2021!!
Posted by Graham at 12:01 AM

Hope things go better for you and your wife in 2021, and that you had as good a Christmas as was possible under the circumstances.

Thanks, Kid. All good here. Hoping the same for you.