As we all recover from our Thanksgiving eating binges, it's time once again for Friday Blues Fix's look at five discs that might have slipped through the cracks upon first release.  If you're like me, you might have missed them because you weren't listening to the blues at the time, they might have been overshadowed by other new releases, they might have been hard to track down, or maybe they went out of print before you could find them, or maybe you just flat missed out the first time around due to total cluelessness, which is how it usually works for me.  Don't look now, but this is your golden opportunity to make up for lost time and track down these great albums.  Some of them may be out of print, but they can be found pretty easily online at eBay or Amazon.  You can thank me later. 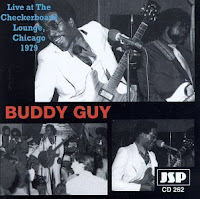 Buddy Guy - Live at The Checkerboard Lounge, Chicago 1979 (JSP Records):  This may have slipped through the cracks for some because it was recorded and released by a U.K. label during a low point for the blues.  It was recorded at Guy's own club, The Checkerboard, which was located on Chicago's South Side, so Guy was pretty much in his ideal environment, playing for his friends and neighbors, backed by his own band, which included his brother Phil on guitar, Ray Allison on drums, and J.W. Williams on bass, among others.  Guy is in really good form here, with the sizzling guitar work and passionate vocals that we would expect from him and very little of the rock-edged shredding that we're also accustomed to hearing from him in recent times.  This is just the blues, pure and simple, or as pure and simple as Buddy Guy can play them.  You can hear the crowd and assorted racket during the tunes, even a few people who you really want to tell to shut up during the songs.  That just adds to the atmosphere and gives you the feeling that you are there.  If you're a Guy fan and you've missed this one, you'll want to check it out. 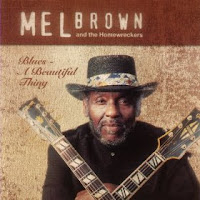 Mel Brown and the Homewreckers - Blues - A Beautiful Thing (Electro-Fi Records):  Guitarist Mel Brown played with just about everybody who was anybody in the blues during his long career, including Sonny Boy Williamson II, Etta James, Lou Rawls, T-Bone Walker, B.B. King, and a lengthy stint with Bobby Bland in the 60's and 70's.  He recorded a few albums in the 60's, but was largely absent from the studio until the late 90's, when he was signed to Electro-Fi and released several excellent albums over the next ten years until his death in 2009 at age 69.  In 2006, he recorded this underrated effort, on which he wrote nine of the twelve tracks, mixing four tasty instrumentals in that verify his standing among the great elite modern blues guitarists.  Brown was also a keyboardist of note, and he plays on several of the tracks.  While Brown was a capable vocalist, the real star of his albums was his guitar and that's the case here as well.  Tasteful restraint is the best way to describe Brown's guitar work and this album will be pleasing to any blues guitar fan. 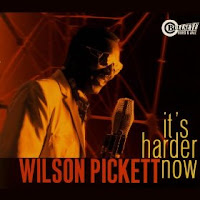 Wilson Pickett - It's Harder Now (Bullseye Blues):  If you're over forty-five and listened to popular music at all, you know who Wilson Pickett was.  Anyone younger than that has heard at least one of his songs in some musical setting.  To me, Pickett was the closest thing to blues that there was in the soul music world.  He was a force of nature in the world of southern soul with his fiery vocal style and his multiple hits, which included "In The Midnight Hour," "Mustang Sally," "Funky Broadway," and many others.  He faded from the recording scene for a lengthy period, along with many other soul singers in the 70's.  He resurfaced in 1999 with this excellent release.  One thing that most listeners notice when they plug this one into their stereo is how little his vocals diminished over time.  He could still shriek and growl and hit those notes as if it was 40 years earlier.  At the time this album was released, most soul records were heavy on synthesizers and drum machines, but It's Harder Now was different and ranks pretty high in The Wicked Pickett's musical catalog. 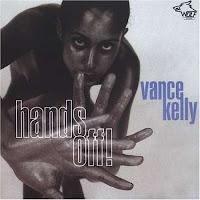 Vance Kelly - Hands Off! (Wolf Records):  I'm not really sure what the deal is with Vance Kelly.  He's been on the Chicago scene since the late 60's/early 70's, working with A.C. Reed's Spark Plugs in the 80's and launching his own solo career in the 90's.  He plays rock solid Chicago blues and southern soul with the best of them, with guitar skills to burn and a strong, soulful vocal style.  Despite his obvious talent, he has never recorded an album for an American-based record label, recording eight albums for the Austrian-based Wolf Records.  All of his recordings are excellent, mixing some classic blues and soul covers with some highly original songwriting, but Hands Off! is my favorite because it was my first exposure to this deserving artist.  He takes several old blues war horses and breathes new life into them.  His own songs rest pretty comfortably in the soul/blues vein on this particular release, and I can't understand why he hasn't garnered more attention by a domestic label.  Oh well, it's their loss, but you shouldn't have to suffer from their neglect, so be sure and check out Vance Kelly.  This is a good place to start.....at least it was for me. 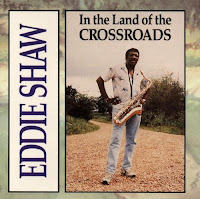 Eddie Shaw - In the Land of the Crossroads (Rooster Blues):  Shaw is a rarity in the blues....a sax player that leads a blues band.  The former Howlin' Wolf side man has led his own band since the Wolf passed away in 1976 and he also played with Magic Sam, Otis Rush, Freddy King, and Muddy Waters during his long career.  His own band, the Wolf Gang, features his son Eddie Jr., also known as Vaan, on lead guitar.  Shaw has recorded pretty regularly since the late 70's, but this 1992 release on Rooster Blues, recorded in his native Mississippi, stands as his best.  I like a lot of things about this disc.....the songwriting is really unique with songs like "Dunkin' Donut Woman" (one of my all time favorites), "My Friend Rosco," "Wine Head Hole," "Fannie Mae Jones," and the vividly descriptive "Delta Bound."  The younger Shaw is a powerhouse on guitar and provides some nice moments, and his Dad blows the sax like a hurricane and is a strong vocalist to boot.  This one may be a bit hard to find, but you'll be glad you tracked it down.