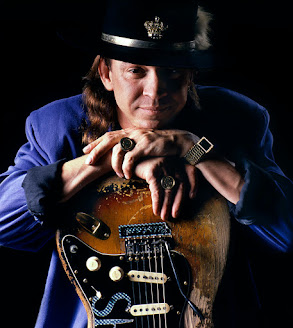 Yesterday morning was the 30th anniversary of Stevie Ray Vaughan’s tragic death.  Ten years ago, during the first year of the blog, I wrote a lengthy tribute to SRV, so I won’t repeat myself as far as what his music means to me (and lots of others).  I will elaborate on how he helped steer me to the blues, or at least improve my focus toward the music.  I don’t think I went into that in as much detail back then…..if so, sorry, here I go again.

Actually, the first time I heard him was in a record store.  They were playing his album as background music and the track I heard was “Stang’s Swang,” the closing track on Couldn’t Stand The Weather.  I was really into guitar at that time……I listened to a lot of Clapton and a lot of Hendrix, having just discovered him a couple of years earlier.  I was also listening to a lot of jazz and R&B at the time and was a fan of George Benson, Earl Klugh, and Wes Montgomery.  Vaughan’s performance on “Stang’s Swang” really caught my ear because it had that jazz feel to it, but was also a little grittier.

I didn’t buy his album then…..I had found something else that I wanted at the time (can’t remember what it was, but probably didn’t make much of an impact, obviously).  A few weeks later, I was back in college and my roommate, who had a really eclectic record collection of rock, blues, and jazz, said “Have you heard this Stevie Ray Vaughan guy?  He’s Jimmie Vaughan’s brother.”  Now I had heard of Jimmie Vaughan because I’d heard of the Fabulous Thunderbirds and they had played on one of my favorite Carlos Santana albums, Havana Moon.  I had tracked down one of their cassettes (T-Bird Rhythm) and really liked it, so I decided to take the plunge on SRV and picked up Couldn’t Stand The Weather.

As I said, I was really into Hendrix, so I loved the “Voodoo Chile (Slight Return)” cover, but the other songs just blew me away, too.  The opener, “Scuttle Buttin’” caught me flat-footed and the title track really pulled me in.  Believe it or not, I’d never heard “Things That I Used To Do,” before I heard SRV’s version (remember, this was pre-blues for me).  I loved “Cold Shot” and the slow burner “Tin Pan Alley” was amazing and the manic “Honey Bee” was fun.  Then I got to hear “Stang’s Swang” in its entirety.

Within a month, I had backtracked and picked up Vaughan’s debut, Texas Flood, and I liked it even more than Couldn’t Stand The Weather….it’s still my go-to SRV disc when I want to hear just one. 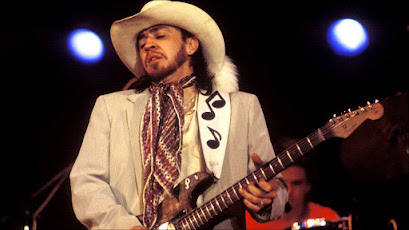 From that point, I eagerly anticipated each of SRV’s releases, but something else happened along the way.  I’ve always been curious about music and it always fascinated me to hear an earlier version of a song that I liked.  I’m not sure when that started, maybe when I heard a song on the radio that was a version of an older tune…….I liked 50’s and 60’s rock and soul because my uncle had given us a stack of old 45’s and albums from the early mid 60’s when I was a kid and I played them until they warped.  It was always cool to hear another artist’s perspective on an older song.

It was hard for me to find old blues recordings back in the mid 80’s, because I wasn’t sure where to look and who to look for, but I noticed that a lot of Vaughan’s songs on his albums were cover tunes (thank you, liner notes), so I began to seek out some of the original tunes.  Keep in mind that this was before the internet……YouTube……Spotify……Pandora, etc……so it was kind of like an Easter Egg hunt at times.

One thing that helped me out was that Vaughan (and Robert Cray and the T-Birds…..and The Blues Brothers movie from a few years earlier going to cable and video) helped inspire a resurgence of interest in the blues, so blues began appearing as if out of nowhere…..on TV ads, on movie soundtracks for starters.  That sort of opened the door for me, because around the same time, various labels started reissuing blues albums and compiling new collections.  Then I discovered Alligator Records (and Vaughan’s collaboration with the great Lonnie Mack) and soon I was on my way to becoming a blues nut.

So, yeah…..Stevie Ray Vaughan played a big part in what music I listen to (and write about) and through his efforts (and others….Clapton, George Thorogood, Robert Cray, B.B. King), I was able to dig deeper and discover a lot of other great guitarists and bluesmen and their music…..Buddy Guy, Howlin’ Wolf, Muddy Waters, etc…..  From listening to those guys, I found lots of other great artists…..Junior Wells, Son Seals, Albert King, T-Bone Walker, Luther Allison, etc…), then I dug even deeper (Robert Johnson, Skip James, Son House, Tommy Johnson, etc…..), and so on and so on. 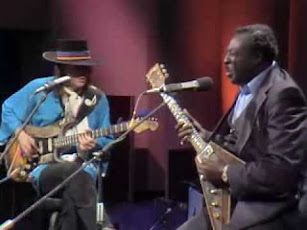 Over the past few months, I’ve had more time than usual and I’ve been revisiting Stevie Ray Vaughan’s catalog.  I had all of his music on cassette many years ago and recently picked up all of his CDs, all of which have added bonus cuts/live tracks, so I now have access to a lot of his music that I didn’t have before.  One that I had missed the first time around for some reason was his collaboration with Albert King, In Session.  I have probably listened to it more than the others because the two guitarist had so much in common musically and they had a genuine rapport and a most genuine mutual respect for each other.  From what I’ve read, the latter didn’t always come easily from King, but Vaughan really won him over and it shows in their playing together.

I also read Alan Paul and Andy Aledort’s recent biography Texas Flood:  The Inside Story of Stevie Ray Vaughan (reviewed here a few months back) and reread the Joe Nick Patoski/Bill Crawford bio from the mid 90’s, Caught In the Crossfire, and Keri Leigh’s underrated Soul To Soul.  Each of the books paint a slightly different picture of Vaughan’s life, his trials, his failures, his shortcomings, and his successes, but all of them agree that he was one of the finest guitarists to come around in a long time and in his short time on the planet, he made some mighty music and influenced a lot of guitarists in a variety of genres, but most definitely the blues.  At the same time, he was never shy about his own influences on guitar and as a songwriter and singer.

When a musician dies early in their life, it’s only natural to wonder where they might have gone as an artist if they had lived.  I’ve wondered that a lot with other musicians….Jimi Hendrix, Duane Allman, and Magic Sam, to name just a few.  I like to think that, based on one of his last songs on In Step, the  instrumental “Rivera Paradise,” he might have ventured into jazz a bit more.  However, I think that regardless of where he would have directed his talents, he still would have had both feet firmly planted in the blues.  That would have always been present in his music, wherever direction he chose to pursue.

It’s still hard to believe that he died thirty years ago.  I can remember exactly what I was doing when I heard the news.  It’s sad that his life was cut short, but I’m grateful that he helped guide me to this music that I love, and I know he guided a lot of others in that direction, too.