My third find at the Little Big Store was a pleasant surprise.  When I first started listening to the blues, most of it had a decided Chicago bent.  I found that I really enjoyed the Chicago blues of the 50's.....Muddy Waters, Howlin' Wolf, Little Walter, Sonny Boy Williamson (Version II), Otis Rush, Magic Sam, and so on an so on.  I picked up a lot of Chess Records compilations, which were being reissued in a big way in the mid/late 80's.  Over the first few years, I dug deeper and discovered a lot of artists beyond the Mount Rushmore types.....not as well known, but capable of making some excellent music.  While flipping through CDs at the Little Big Store a few weeks ago, I found a release that I'd never seen before, actually never even heard of before, from a pair of Chicago artists who had been favorites for a long time, but weren't as "mainstream" as some of the others mentioned.  Floyd Jones and Eddie Taylor.
The first time I heard Floyd Jones was on Chess Records' compilation Drop Down Mama, which included his classic "Dark Road."  I'm not sure anybody could do that song as well as Jones did.  It came from a place deep down in his soul.  He recorded it several times over his career on multiple labels and each version brought a little something different to the table.  A couple of his other sides were "Hard Times," "Stockyard Blues," and "On The Road Again," which Canned Heat made a Top 10 hit in 1968.  Most of Jones' songs took a dour, gloomy tone and were very powerful, but maybe they made for difficult listening to folks who wanted a little more upbeat blues at the time.  During the 50's, Jones recorded for Chess, JOB, and Vee-Jay in the 50's, and in the early 80's, he appeared on one of my favorite albums, Old Friends, with Honeyboy Edwards, Big Walter Horton, Sunnyland Slim, and Kansas City Red, and continued to play in Chicago until he passed away in 1989.
Blues fans may not be familiar with Eddie Taylor, but there's a good chance that they've heard him before.  His rhythm guitar was the guiding force behind Jimmy Reed's excellent sides for Vee-Jay Records in the 50's.   However, there was much more to Taylor.  He recorded his own sides for Vee-Jay, his best-known tracks were probably "Bad Boy," which featured Reed on harmonica, and "Big Town Playboy," both of which have been covered frequently by blues artists through the years.  Though he never achieved the fame and popularity of Reed or other Chicago artists, he played a vital role in the development of the Chicago Blues sound, backing Snooky Pryor, Elmore James, John Lee Hooker, John Brim, Sammy Lay, and many others.  He recorded a couple of albums of his own in the 70's and 80's that showed he could have been a contender with just a few more breaks, but passed away on Christmas Day in 1985.  Several of his children, the late guitarist Eddie Taylor Jr., drummer Larry Taylor, and singer Demetria Taylor, as well as his late wife Vera were fine blues artists in their own right. 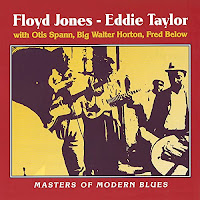 Jones and Taylor shared an album on Testament Records, Masters of Modern Blues (Volume 3).  The label was founded by Pete Welding, who was a writer and editor of Down Beat magazine.  Over about fifteen years, Welding recorded blues, jazz, country, and gospel artists, focusing mostly on the blues.  Many blues artists who had seldom recorded got the opportunity with Testament and many of the albums are still available, thanks to HighTone Records and Shout! Factory.
The 60's were a lean time for recording blues, at least compared to the 50's and many of these artists were happy for the opportunity to be heard and made the most of it.  There were four volumes of Masters of Modern Blues (we'll look at the rest in the future) with other sets from J.B. Hutto, Johnny Shines, Robert Nighthawk, and Houston Stackhouse in the collection.  Others who recorded for Testament included Honeyboy Edwards, Sleepy John Estes, Otis Spann, Big Joe Williams, Mississippi Fred McDowell, and Big John Wrencher.  Testament also released some marvelous collections focusing on slide guitarists, harmonica players, fife and drum bands, and topical albums.
Volume 3 of Masters of Modern Blues features eight sides from Floyd Jones and eight from Eddie Taylor recorded in 1966.  Both artists sound like they are making up for lost time on these tracks.  Jones has two versions of "Dark Road" on this set (one previously unreleased) as well as new versions of "Hard Times" and "Stockyard Blues."  His other sides are pretty much in keeping with his usual approach, although "Sweet Talkin' Woman" is fairly upbeat.  Taylor also reproduces his two favorites, "Bad Boy" (also with an alternate take) and "Big Time Playboy," while turning in splendid performances on other tunes like "Train Fare Home," "Feel So Bad," and "After Hours."
As noteworthy as these two artists' performances are, they are enhanced by the performance of their backing band. Jones played bass and Taylor guitar on each track, and they are supported by an all-star trio - Otis Spann on piano, Big Walter Horton on harmonica, and Fred Below on drums.  One couldn't ask for a better band playing behind them.
This was a fantastic set of blues from a couple of artists who didn't really get the opportunities that they deserved during their lifetimes.  In fact, I was so excited to hear this set that I ended up ordering the other three volumes of the series and pulled out a couple of other Testament recordings I've picked up over the years, Down Home Slide and Down Home Harp.  There's great listening ahead!!
Posted by Graham at 12:01 AM