So, who's up for an all-instrumental day at FBF?  Today, we’ll hear from some familiar musicians playing their instruments of choice.  There are a lot of blues instrumentals that have been popular over the years, most notably Freddy King’s “Hideaway” and Little Walter’s “Juke,” from the 50’s and 60’s.  Both of those were almost prerequisites for any Chicago blues band (and still are).  Everyone had at least one of two jams on their set list to occasionally give the band a chance in the spotlight and to get the crowd going. 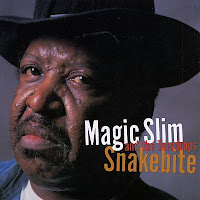 First up today are Magic Slim and the Teardrops with Slim’s tribute to one of his mentors, Hound Dog Taylor.  The scorching “Snakebite” hails from his 2000 album of the same name.  The Dog was known to pull out an instrumental of his own once in a while, and is credited by many for originating “Hideaway.”  Slim’s second guitarist at the time, Michael Dotson, handles the slide work on this track and Slim keeps the shuffle going in the background.  Slim was always a generous bandleader, and often stepped back and let his band mates take center stage.  He recorded multiple sessions, live and studio for Austria's Wolf Records, and the label also released albums featuring his band members, from Alabama Junior Pettis, John Primer, Nick Holt, and even a couple of collections of tunes from their various live dates featuring these three and other Teardrops.. 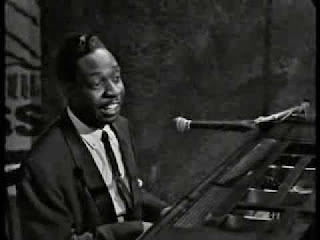 Next up is Otis Spann, considered by many to be the greatest blues piano player of all time.  I’m inclined to agree…..nobody did it quite like Spann.  For years, he was a vital cog in the Muddy Waters Band.  He also did some recording on his own….his sets with Robert Jr. Lockwood on guitar (Otis Spann Is The Blues and Walking The Blues) are essential listening.  In the mid 60’s, Spann was one of a group of artists who recorded some songs on a 3 record anthology for Vanguard Records called Chicago/The Blues/Today! (others included Buddy Guy, Junior Wells, Otis Rush, J.B. Hutto, Homesick James Williams, James Cotton, and Charlie Musselwhite, and, yes, it’s an essential listen, too, as we discussed a few years back).  Spann had one of the worst colds ever and tried to sing on a couple of tracks before opting for showing his piano skills……a wise move.  “Spann’s Stomp” is from that session and features Spann with drummer S.P. Leary.  Spann played with Waters until 1969, recording his own albums as a leader off and on, but died in 1970 from liver cancer before he could really take off on his own. 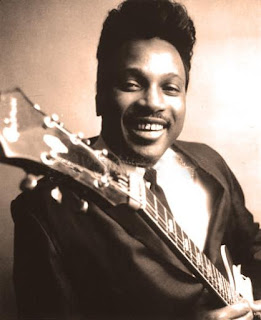 From that same Vanguard series, here’s Otis Rush.  Rush was thrilled for the opportunity to record again.  He had been mired in a horrible deal with Duke Records.  Rush had bad luck with record labels.  His first label, Cobra, went under when the label owner did (his body was found in Lake Michigan, a victim of too many gambling debts), then he was relegated to the backburner at Chess.  After signing with Duke, he had a grand total of one side released in a six-eight years span).  All these bad deals made Rush, already suspicious of most everybody in the business, pretty frustrating to deal with, but he left all that behind for his five-song set, which also featured Luther Tucker on rhythm guitar and Sax Crowder on, well, sax.  This track, the optimistic “Everything’s Going To Turn Out Alright,” is one of my favorite Otis Rush tunes.  It really shows the influence of Albert King on Rush’s playing, Rush's appearance on this series did lead to better things for Rush…..at least for a while.  He enjoyed a busy spell in the late 60's/early 70's, recording a well-received album for Atlantic/Cotillion in 1969, a couple for Delmark in the mid 70's, one for HighTone (released in the late 80's), and multiple sessions overseas.  For more info on Otis Rush, check out this 2010 post from FBF.

Here’s more slide guitar from the legendary Elmore James.  James was born in Richland, MS, but his base of operations was in Canton, MS when he wasn’t going to Chicago.  James’ immortal track, “Dust My Broom,” was recorded in downtown Jackson, MS with Sonny Boy Williamson II on harmonica.  He recorded for many labels over many years, with all of his music being exceptionally high quality.  Quite simply put, anyone who plays slide guitar today plays Elmore James at one time or another.  He passed away over 50 years ago from a heart attack caused by hard living and relentless work, but his music is still a big part of the blues.  FBF did a profile on Elmore James a few years back, which you can read here, but before you do that, check out his instrumental contribution to today's post, 1953's “Hawaiian Boogie.”


That's all for now, but Friday Blues Fix will revisit this topic again in the future.