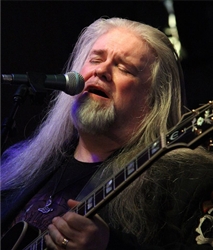 Some of the best Southern-styled blues rock currently being played comes from a band based in Michigan.  The Rusty Wright Band combines the blues and Southern rock (his family has roots in Alabama) with the rowdy rock and soul of the Motor City and the combination is irresistible!  He is a top notch guitarist, singer, and songwriter and he's backed by a powerhouse band that includes keyboardist Robert John Manzitti, drummer Marc Friedman, bassist Dennis Bellinger, and singer/guitarist/wife Laurie Wright.

The band's latest CD is Wonder Man (Sadson Music), and, as you might expect, it's a mix of blues, rock, and soul, highlighted by Wright's smoking hot guitar and soulful vocals, the band's seamless interplay (notably between Wright and Manzitti), and Wright's unique songwriting, which puts a cool modern spin on familiar blues topics.  I highly recommend this album to anyone who digs Southern blues and rock.

Rusty Wright graciously agreed to sit down with FBF for Ten Questions and we are grateful that he took the time to do so.  Check out our conversation and when you're done, check out Wonder Man and the rest of the band's catalog below. 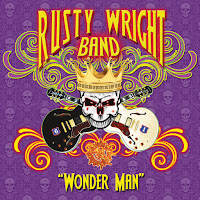 Friday Blues Fix:  For starters, can you tell us about the Rusty Wright Band’s brand of blues? Rusty Wright:  RWB's brand of blues blends a wide variety of influences. The Wonder Man CD leans on the blues/rock side of things but I am not confined to that limit. Depending on the inspiration the song may be traditional or have a Chicago vibe or even Delta. My music is basically an eclectic blend of diverse influences with Blues infused core.FBF:  Your new album, Wonder Man, covers a lot of ground……from traditional blues, blues-rock, and Southern rock.  What are some of your highlights from the disc?RW:  My favorites are "Black Hat Boogie," which is fast paced but experiments with Mini Moog blends, "Gonna Come A Day" which is a soulful traditional blues, Title track "Wonder Man" (I love the horns) and "Whiskey Drinkin' Woman" is a Lo Fi butt kicker that has more experimentation with the Moogs but I really like them all. There's something on the CD for just about every taste of Blues fan.

FBF:  You and the band really fire on all cylinders on the album.  What does it take for a great band to really put it together and work with such unity?RW:  Either a lot of road touring or somebody who can really CRACK THE WHIP in the studio! LOL! In our case there's BOTH!FBF:  What about your musical background?  Did you come from a musical family?RW:  Oh yes, my mother studied opera and then as I grew older, she had a touring gospel act called The Temples that released several records and traveled all over. I got my first gig playing guitar in her back up band. My father was a music promoter in Michigan but came from Alabama to work in the factories up north. He brought a large vinyl record collection with him that I listened to constantly growing up.FBF:  What else did you listen to when you were growing up?RW:  My dad's vinyl records when I was very small.  Lot's of Chess records artists like Howlin' Wolf, Muddy Waters, Etta James, and early Rock n Roll......Elvis, Jerry Lee Lewis, Little Richard. I would spend summers in Alabama with my Dad's family and my cousins got me into the Allman Brothers, Lynyrd Skynyrd, Marshall Tucker, Charlie Daniels, etc., and as I got older living in Michigan, I got into Detroit artists like Mitch Ryder, Ted Nugent, Grand Funk all the way up to prog rock acts like Yes and Rush. I just love unique musical sounds so I've never really limited my focus to one style of music.FBF:  How did you gravitate to the blues?  What drew you to the music?RW:  The passion. I could hear this powerful emotion and even though I didn't understand it yet as a small boy, I just knew it was something important. Then there was the great grooves that those guys in the rhythm section could throw down. WOW, you just HAD to move to it.FBF:  You play some powerhouse guitar……who are some of your influences as a guitarist? 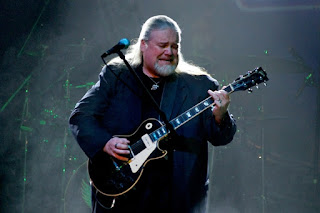 RW:  There are many, I try to listen and learn from as many players as possible. I don't believe anyone knows everything but some people who really made an impression were Robin Trower, Stevie Ray Vaughan, Duane Allman for slide guitar, Alex Lifeson of Rush for his incredibly unique approach to chord voicing and lead solo construction. He is the player that really showed me that there are absolutely NO boundaries except your own desire and imagination.FBF:  Who influenced you as a songwriter?  What is your approach to songwriting?  What inspires you to write…….events in your life?  Current events?   Do you just sit down and start writing or do you do it spontaneously?RW:  Things hit me out of the blue. Songs just come like somebody unscrews the top of my brain and pours them in. I can hear all the parts even the lyrics. My biggest hassle is getting them written down fast enough before they evaporate from my memory.FBF:  Do you have any interesting stories from your career that you would like to share with us?RW:  Well, when we started the band our 2nd show was opening for Lynyrd Skynyrd which was unnerving in itself but as I am playing I look over and see all three guitar players from Skynyrd staring at me from back stage. I thought I would puke on my shoes. LOL! after the set they all came up to me and shook my hand and said, "DUDE! Where the hell did you come from!?!"  That was a proud moment for me.FBF:  What’s next for the Rusty Wright Band?  Are there some things that you haven’t done yet that you would like to do?RW:  Well, I'll continue to write and I hope to do more touring in Europe, but I'll just see how things go. I never plan too far ahead.FBF:  What and who do you listen to in your spare time?RW:  I don't actively listen to radio because it clouds my songwriting, but I do like to check out things other blues players are doing just to see where their vibe is at.

FBF:  If you weren’t a musician, what would you be doing?RW;  LOL! Probably be living in a small cabin or a cave painting pictures of all the things I see in my head! Until the rubber truck came and got me! LOL!

More from the Rusty Wright Band, all on Sadson Music.  Also, check out the band's cool merchandise at their website. 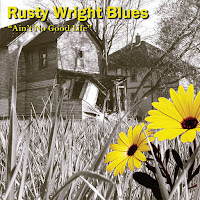 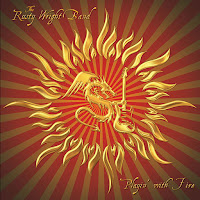 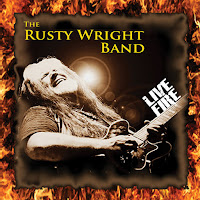 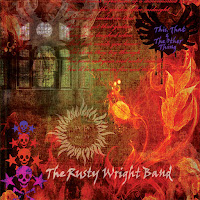