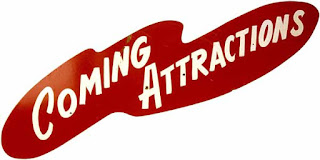 Continuing our topic from last week, Friday Blues Fix looks at five more great new releases that will either be released soon or are already thrilling blues fans all over.  As always, extended reviews of these discs can be found in current or future issues of Blues Bytes.

Boz Scaggs - Memphis (429 Records):  Scaggs' first release in five years finds him in Memphis, at Royal Studios, backed by some of the Bluff City's finest (including keyboard wizards Charles Hodges, Spooner Oldham, and Lester Snell), along with studio legends Ray Parker, Jr., Willie Weeks, Jim Cox, and the Royal Strings and Horns.  He tackles ten great cover tunes (including Willy DeVille's "Mixed Up, Shook Up Girl," Steely Dan's "Pearl of the Quarter," "Love On A Two Way Street," and Al Green's "So Good To Be Here"), along with two of his own fine compositions.  Somewhere in Soul Heaven, Willie Mitchell is smiling a big smile.  Scaggs also delves into the blues while he's there, with covers of tunes made famous by Tyrone Davis ("Can I Change My Mind"), Jimmy Reed ("You Got Me Cryin'"), and "Corinna, Corinna," which features Keb' Mo' on dobro.  Scaggs has always mixed the blues and R&B into everything he does, so it's really cool when he puts them out front, because to me, that's what he does best.  This is a great set of blues that just about any music fan would enjoy. 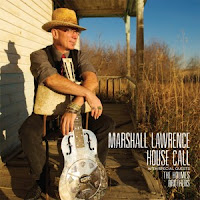 Marshall Lawrence - House Call:  Lawrence calls his brand of acoustic blues "Neo Delta  Blues & Roots."  "Delta Blues on Steroids" is appropriate, too.  Lawrence's kinetic fretwork, his highly original songwriting, and his fresh interpretations of classic blues tunes really stand out.  He plays guitars, mandolins, and does all sorts of percussion, ranging from hand clapping to toe tapping to clanging on pipes.  Lawrence, dubbed "The Doctor of the Blues," wrote eleven of the thirteen tracks on House Call.  The Holmes Brothers also stop by and lend harmony vocals on a track ("Factory Closing Blues").  Lawrence's original tunes are uniformly excellent and his delivery, both on guitar and singing is very entertaining.  I haven't seen him perform live, but I think I would enjoy it immensely.  If you're a fan of acoustic blues, you'll like this one.  If you're not a fan, you will be after you listen.  You can check out all of the tunes on House Call here.  Here's a video clip Lawrence in action. 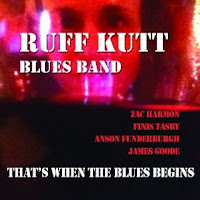 The Ruff Kutt Blues Band - That's When The Blues Begins (Vizztone): Rockabilly legend James Goode has put together another set of Gulf Coast-styled blues, hoping to exceed the success of the group's debut release, 2011's Mill Block Blues.  This time around, Goode enlists a pair of big names to take the mic.  Finis Tasby sings on six tracks (his last recordings before his debilitating stroke in November) and Zac Harmon fronts the group for several others.  Both of them do a wonderful job on these tunes, which all have a distinctive Texas or Louisiana flair to them.  Anson Funderburgh is back and dazzles with his Texas via Chicago guitar work.  As with their previous release, proceeds from the sales of this CD will benefit the HART Fund, which provides relief to blues artists in need.  Some of the proceeds will benefit Tasby as well, so it's good music for a good cause.  You can visit here and listen to one of the songs. 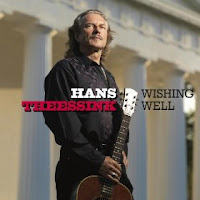 Hans Theessink - Wishing Well (Blue Groove):  One of Europe's most beloved blues artists for over 40 years, Theessink has been pretty active over the past three years....this is his third release.  Wishing Well is a mellow masterpiece, chock full of exquisite guitar work and Theessink's warm, burnished baritone.  He covers a wide area of American music, ranging from pre-war blues classics to Johnny Cash, Bob Dylan, and Townes Van Zandt.  His own tunes mix pretty well with the classics, and while the tone is pretty mellow throughout, this disc is perfect for quiet nights or early mornings.  I'm a relative latecomer to the gifts of Hans Theessink, but I've certainly enjoyed what I've heard and hope to do some backtracking and see what I've missed. 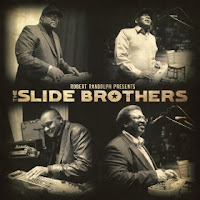 The Slide Brothers - Robert Randolph Presents:  The Slide Brothers (Concord Records):  I am still planning on doing a Sacred Steel post in the near future.  This CD has encouraged me to do it sooner than later.  Although Sacred Steel has been around for a number of years, as part of several related Pentecostal churches since the 30's, Randolph has played a major role in  getting the music out to a wider audience over the past decade with his Family Band.  Several other steel guitarists, all older than Randolph, have been able to achieve some measure of fame with recordings of their own.  For this collection, Randolph has brought together four of the genre's finest.....Chuck and Phil Campbell (of the Campbell Brothers), Aubrey Ghent, and Calvin Cooke.  Together, they rip through eleven gospel, blues, and rock songs.....some familiar, some not so much....that will make your jaws drop or your feet move, or possibly both.  Loaded with some noteworthy guests (including Shemekia Copeland, the Blind Boys of Alabama, and members of the Family Band) the coolest names are former Hendrix bass player Billy Cox teaming with SRV drummer Chris Layton for a killer version of "The Sky Is Crying."  This is an excellent set.