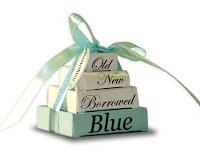 Welcome once again to one of Friday Blues Fix's most popular topics, it's hard to believe that this is our eighth edition.  I always enjoy doing these mini-bio/info posts.  As always, we will look at a blues artists from any time between the 30's and the 50's (Something Old), a relative newcomer to the scene who you really need to check out (Something New), a blues artist performing a rock tune or vice versa (Something Borrowed), and finally, someone who epitomizes the very essence of the blues (Something Blue).  Here we go..... 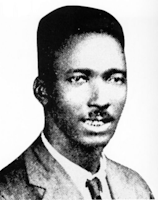 For Something Old, let's go back to the late 1920's and one of the subjects of a recent post, Tommy Johnson.  Johnson was born in Terry, MS, a few miles south of Jackson, and lived in Crystal Springs most of his life and learned to play guitar there, but he moved to the delta after marrying.  He ended up around Drew, MS, close to Dockery's Plantation, where he met Charley Patton and Willie Brown.

By the time he was in his mid 20's, he was back in Crystal Springs as a home base, but traveled all over the south, usually with Papa Charlie McCoy, with whom he recorded his first sessions in Memphis in 1928.  Those sessions included this song, "Canned Heat Blues," a harrowing account of Johnson's complete addiction to alcohol and the lengths he would go to get it (in this case, drinking methanol from the cooking fuel Sterno, also called "Canned Heat").  The blues rockers Canned Heat took their name from this song much later.

Tommy Johnson ranks with Patton and Son House as major influences in the development of Robert Johnson.  Johnson also crafted the "Devil at the Crossroads" story years before it was used in the Robert Johnson legend.  Vocally, Tommy Johnson possessed an amazing range, able to move from an eerie falsetto to a feral growl.  His guitar playing was very advanced and intricate compared to other blues guitarist of the era.  Sadly, his last recordings were in 1930 and he descended deep into alcoholism and remained mostly in the Jackson area, playing at jukes and local parties until he died in 1956. 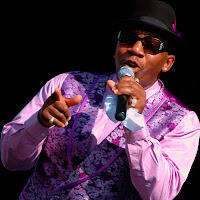 For Something New, let's check out John Lee Hooker, Jr.  Yes, he's the son of John Lee Hooker and he spent most of his teen years in the mid to late 60's traveling with his dad and even appearing on a live recording with him at Soledad Prison in the late 60's.  Unfortunately, he fell into the world of drug addiction for nearly 25 years before cleaning up and resuming his career.  While the younger Hooker can duplicate his father's relentless boogie sound somewhat, his own music also incorporates urban blues, jazz, and R&B.  He has released several CDs, his 2004 debut actually netted him a Grammy Award.  His latest disc is All Hooked Up and is his best so far.  If you haven't experience the younger John Lee Hooker, you're missing out.  He's a gifted singer and one of the better composers of new blues material out there.  All of his recordings are worth a listen.  Check out this tune from a couple of years ago.

For Something Borrowed, here's Bernard Allison, son of the legendary Luther Allison....yet another youngster following proudly in the footsteps of his blues-playing dad (I sense a future blog post).  Bernard has been around for a long time, spending time in his dad's band before launching his own solo career about twenty years ago.  Since his dad's untimely death from cancer in 1997, Bernard has recorded rather prolifically and has a nice catalog of studio and live recording.  2000's Across the Water mixes blues, rock, and funk in equal doses.  While it's not his best release (a bit too rock-oriented in some places), it has some nice moments, such as Allison's torrid version of Michael Lunn's "The River's Rising," first recorded by Joe Cocker back in the mid 80's.  While Cocker's version was great, Allison's version tops it pretty easily to me. 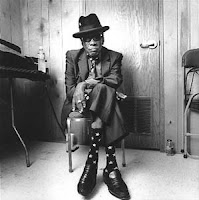 For Something Blue, let's keep it in the family this time around with John Lee Hooker Jr.'s dad in the spotlight.  For many blues fans, John Lee Hooker was one of the entrance-ways to our love affair with the blues.  Many of us heard him on commercials, old movies, maybe one of his 60's albums or his sides for Chess, VeeJay, or dozens of other labels, or we heard his songs interpreted by scores of rock musicians.  However we were introduced to him, when we heard him, we knew that John Lee Hooker was the blues, in its purest and simplest form.