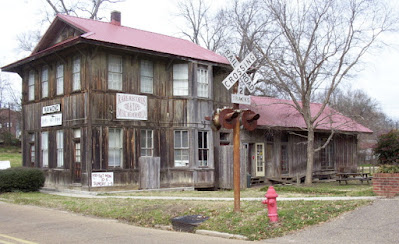 So I had a doctor visit this past Friday for a routine checkup (all was well).  While I was out and in the neighborhood......give or take about twenty-five miles.....I decided to stop by The Little Big Store, where I found those great deals during the summer.  I had been planning to return for a couple of weekends, but things didn't work out, so I decided to make it work out while I had a chance.

I was really glad that I did, because they had some "new" old albums to choose from this time around.  I had a couple that I was intending to purchase if they were still there when I returned, and I did, but there were some other great selections that I picked up while I was there.  Let's check out a couple of them, why don't we...... 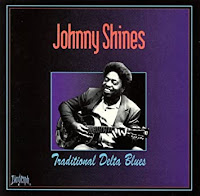 Johnny Shines' music has always intrigued me.  I first saw him in the mid-80's on a public TV documentary about the Delta Blues Festival.  This was early on into my journey through the blues and I was just fascinated by his style.......that slide guitar and his powerful vocals just grabbed your attention.  Later on, when I read Peter Guralnick's Feel Like Going Home, I learned much more about him.....how he traveled and played with Robert Johnson and probably knew as much about him as any musician of that time.

In the 40's and 50's, he played electric blues in Chicago, recording for Chess and J.O.B. among others, but returned to his roots in the 60's and 70's, playing in solo acoustic format on many of his albums.  I've picked up several Johnny Shines albums at The Little Big Store over the past few months and I left Traditional Delta Blues, hoping it would be there for my next visit.  Thank goodness it was still there.

These 14 sides were recorded in the early 70's, but I'm not sure if they were ever released until the early 90's by Biograph Records, the liner notes don't really say.  I don't understand why such great music sits on the shelf for so long, but I guess that's the music business.  Anyway, Shines covers several of Robert Johnson's songs ("Milk Cow Blues," "Dynaflow Blues," and "Tell Me Mama," which Shines learned from Johnson, who never recorded it).  He also covers Charley Patton's "Pony Blues," "Sitting On Top Of The World" (from the Mississippi Sheiks), and Memphis Minnie's "Bumble Bee," allegedly the first song Shines ever learned to play.  It's a great set of Delta blues and one of Shines' many excellent recordings. 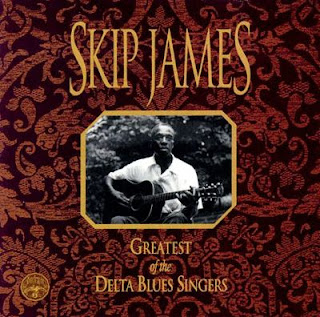 One of the new finds was an album that I had been long been in search of.  I first heard Skip James via his Vanguard recordings in the mid-60's, but the sides recorded on Greatest of the Delta Blues Singers (also on Biograph Records), done just a couple of months after James' incredible appearance at the 1964 Newport Folk Festival, preceded his first Vanguard album by about a year.

James re-recorded six of his classic 1931 sides for this session and introduced six new songs, several of which described his ongoing battle with cancer (which eventually claimed his life in 1968).  Those sides are especially powerful and somber.......James' brand of blues were really blues at times....not exactly dance tunes or singalongs, which might have explained why his Paramount recordings of the 30's didn't sell that well.

Still, while his guitar playing had declined a bit over the 30 year span, his vocals were even more powerful and expressive than they had been.  Listening to him is guaranteed to induce chill bumps, especially late at night.  While I love the Vanguard recordings for their amazing clarity and James' performances, I would put these recordings on the same level as those.  If you can't find this version, Biograph actually re-released it in the early 2000's as Hard Time Killing Floor Blues, with the songs in different playing order (that track is just killer on the Biograph or Vanguard albums...check it out below).  Either version is worth a listen and a great introduction to Skip James' music.

These trips to The Little Big Store have really stirred my interest in acoustic blues and I will be talking about even more of my finds in the future, so stay tuned.