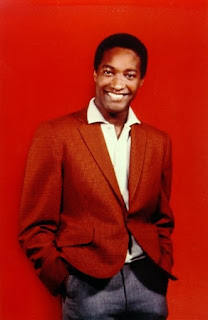 The first time I ever heard Sam Cooke sing, I think it was when I was in my early teens and I was watching one of those afternoon commercials where they sold various music collections on LP, 8 track, or cassette.  Seems like there was a set devoted to Sam Cooke....2 LPs or 1 8-track or cassette....that played snippets of his songs as the titles scrolled down the screen.  I thought he had the most amazing voice, but I had no idea who he was.  At that time, I had a pretty limited knowledge of music, but I was open to hearing new things, so that voice got my attention.

I still didn't know much about him a couple of years later when I found a collection of his music in the cut-out cassette bin at a record store, but I picked that up as soon as I saw it.  There were a few songs that I remembered from the commercial.....his song "What A Wonderful World" was a hit on the radio a few years earlier in a pop version from several stars at the time (Art Garfunkel, James Taylor, and Paul Simon), but Cooke's version was naturally much better.  However, most of the tracks on this collection I bought were laden with strings and background choruses and sort of overwhelmed his overwhelming voice at times, so I ended up not listening as much as I anticipated.  I still enjoyed that magnificent voice, but wished that there was something a little less "produced" that I could find.

Sometime during the mid-80's, RCA (Cooke's label in the 60's) launched a series of recordings paying tribute to Cooke....it was around the time that he was inducted into the Rock & Roll Hall of Fame as a charter member.  One of them was a compilation of his best-known songs called The Man and His Music, and it pretty much covered the bases....28 songs, even including a pair of songs from his early years as a member of the gospel group The Soul Stirrers (it was a major deal when he made the switch from gospel to secular music.....he was gospel music's first "teen idol," drawing a large female crowd wherever the group performed.  While it was pretty much all anyone ever needed to hear from Cooke, the same issue remained with the strings, chorus backing vocals, and pop arrangements (though Cooke was able to exert a little more control in the last years of his career...we'll discuss one of those releases, my favorite, in the future).

However, around the same time The Man and His Music hit stores, another album was released.  It was called One Night Stand!  Live at the Harlem Square Club, 1963 and it was the answer to this listener's prayers.  It was recorded on January 12, 1963 in Miami at the city's Harlem Square Club.  Earlier, RCA had decided that the label needed a live album from Cooke and decided to capture his performance in Miami.  The club was a small spot in Miami's Overtown neighborhood and was filled with some of Cooke's biggest, most appreciative fans, many of which had followed him since his gospel days.  Cooke was backed by some of his own band (guitarist Cliff White and drummer June Gardner), along with guitarist Cornell Dupree and the great King Curtis on saxophone.

Upon hearing the tapes, RCA decided that the show was too loud, too raw, and maybe a little too intimate.  The label wanted a live album that would appeal more to a pop audience and lead to bigger sales.  They decided instead to release Sam Cooke at the Copa, a performance in front of a upscale, largely white audience.  Cooke's performance was toned down and most of the material was more pop-oriented.  Compared to the Miami show, it was pretty tame, though he sounds great.  However, this was more in line with what the label's vision, so it was released in the summer of 1964 and the Harlem Square Club show was put on the shelf and largely forgotten after Cooke's death in December of 1964.

The Harlem Square Club date shows Cooke pulling out all the stops in front of his oldest, and most loyal audience.  In a way, it's almost like a church performance with Cooke singing these familiar songs of his with a primal urgency that marks a change from his studio work.  He basically has the audience eating out of his hand with torrid versions of "Feel It," "Chain Gang," "Cupid," "Twistin' The Night Away."  My favorite is "Somebody Have Mercy," which also features some fantastic blowing from sax legend King Curtis.  The set is just over 37 minutes, but to these ears, it's one of the best live albums I've ever heard.

I bought the original release on cassette in the mid 80's and recently picked up the remastered 2005 release on Sony.  On the original release, the audience was further up in the mix, so it was almost like you were in the crowd and really made for intense, sometimes exciting listening.  The 2005 release cuts the crowd noise back a bit, but not too far, and places more emphasis on Cooke's amazing vocals, which are unlike most everything he ever put to wax......there were some performances that capture the intensity and soul he displayed with The Soul Stirrers, some of them from performances we will discuss in the near future.

As mentioned above, Cooke was killed in December of 1964 under mysterious circumstances.  He had started his own record label, SAR Records, in 1961, recording a number of artists who eventually became stars in their own right.....Bobby Womack (as part of the Valentinos), Johnnie Taylor, Mel Carter, and the Simms Twins.  He recorded soul, R&B, and gospel artists.  He wrote many of his own hits, "Chain Gang," "Twistin' The Night Away," "Chain Gang," "Another Saturday Night," "Cupid," and "Bring It On Home To Me" (that's Lou Rawls singing back-up).  He had 29 Top 40 hits on the Pop charts. 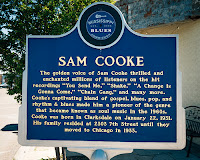 Cooke was born in Clarksdale, MS and had a Mississippi Blues Trail marker dedicated to him in 2009.  Though he's not often associated with the blues, his sound incorporated the blues, R&B, and pop effectively and he has been an influence on singers in multiple genres.  Rod Stewart provided comments on the back cover of the 2005 release, concluding with "...if there weren't a Sam, there might not have been a Rod."  Listening to this release makes it easier to hear Sam Cooke in Rod Stewart's singing.  I also remember Bobby Womack doing a pitch perfect impression of Cooke on one of his mid 90's albums, and I hear a lot of Sam Cooke in Robert Cray's vocals on his most recent album, That's What I Heard.  His performance on One Night Stand!  Live at the Harlem Square Club 1963 provides ample evidence of the blues in his musical roots.  It you haven't heard it, I highly recommend it!