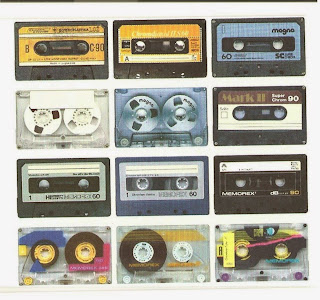 Over the past few weeks, I was sort of feeling nostalgic for some of my old favorites......artists that I started listening to in my early days as a blues fan when I was buying cassettes.  As time passed, I moved on to other artists and other formats, like most listeners will do, but in recent weeks, I found myself drawn back to some of my old favorites.  This week, FBF will take a look at three old favorites repurchased in new formats, plus another release from a few years ago that I finally decided to check out.  Take a look..... 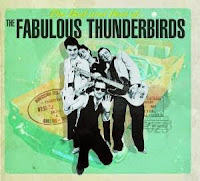 The Fabulous Thunderbirds - The Bad and Best of.....(Repertoire):  About two months ago, I saw a great performance by the T-Birds at the MSU Riley Center.  I had sort of lost track of the band in the early 90's after Jimmie Vaughan left and there was a bit of time between their releases, but they were one of the first blues acts that I got to see perform.  Kim Wilson is one of the best harmonica players on the planet, and has been for a long time, and Vaughan was the epitome of cool in his snazzy outfits and cool and classy guitar work.  I became a fan in the early 80's, actually before I had even heard of Vaughan's younger brother, after I heard the band playing on Carlos Santana's solo album, Havana Moon.


A lot of their later fans may not realize that the Thunderbirds released several albums before hitting it big with their hit album and song, Tuff Enuff, in 1986.  Several of these albums were produced by Nick Lowe and Dave Edmunds, who were part of the legendary late 70's/early 80's band Rockpile.  The T-Birds had toured with Rockpile and Edmunds and Lowe were blown away by the band's talent and played a big role in getting the word out.

When the T-Birds signed with CBS, their sound changed a bit, moving away from the rough-edged blues and R&B of their first four albums to a more slick and polished sound that leaned more toward rock and pop.  After Vaughan's departure, several standout guitarists filled the void admirably, including Duke Robillard, Kid Bangham, the late Nick Curran, and Kirk "Eli" Fletcher.  Most of the band's "Greatest Hits" sets have focused more heavily on the CBS recordings, which is not a bad thing because the T-Birds have consistently made quality music, but either the Wilson/Vaughan edition was missing a big portion of their best work on the collections or the collections that did feature the early years left off the later hits.


Then I found this release, from the UK label Repertoire, that offers the most complete look at the Wilson/Vaughan edition to date, beginning in the late 70's, offering three or four tracks from each of their first four lesser-known albums, and wrapping up the hits from "Tuff Enuff" to "Powerful Stuff," from the 1989 album of the same title.  For blues fans, this is the collection that will be the most satisfying (even though the track below is not included......one of their best show-stoppers back in the day.....and a couple of others that would have fit in nicely, such as their "Staggerlee" track from one of the Porky's movies during their CBS years) and it proves two things.....1) Kim Wilson may not be in a class by himself as a harmonica player, but as Bum Phillips used to say, "it don't take long to call the roll," and 2) Jimmie Vaughan is one of the finest blues guitarists currently drawing breath.....just watch below.


More recently, the band has settled into a nice groove with a pair of outstanding young Texas string-benders....Johnny Moeller and Mike Keller.  If you haven't checked out their latest release, On The Verge, a modern soul/R&B classic, or seen them in performance, where they have a great mix of new tunes and old classics, you need to seize the opportunity. 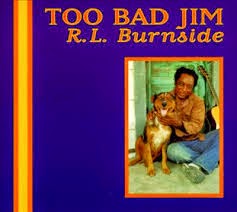 R.L. Burnside - Too Bad Jim (Fat Possum) and Junior Kimbrough and the Soul Blues Boys - All Night Long (Fat Possum):  I first heard Burnside and Kimbrough on the Deep Blues soundtrack (which should be REQUIRED listening for any blues fan, despite it's out-of-print status), and was completely mesmerized by the hypnotic quality of their music.  I had never heard anything quite like it, which may be hard to believe for blues fans now because there are so many purveyors of the North Mississippi Hill Country Blues sound these days.  Twenty years ago, that wasn't the case at all.....there were really only these two guys.

Around the same time that Deep Blues hit the racks, Fat Possum Records came into existence out of Oxford, MS.  They put a beautiful color ad on the inside front cover of Living Blues, which is how I found out about it.  Their first three albums were from Burnside, Kimbrough, and the underrated Arkansas singer/songwriter/harmonica player John Weston.  Back in those days, the only way to order anything was to either fill out an order form and drop it in the mail with a check or money order or call an 800 number.  I ordered all three albums on cassette and played them over and over again (I wrote about Weston's album here a few years back), and continued to listen to their new releases for several years afterward.


Too Bad Jim is actually Burnside's second Fat Possum release, out in 1994.  Though I did enjoy his Fat Possum debut, Bad Luck City, this one has a slight edge to me, maybe Burnside sounds a little more comfortable on this one, or the band is a little sharper, or the songs are more varied or cohesive.....I don't know for sure, but it was really cool to plug this one in the CD player after not hearing it for nearly twenty years.  I really like his version of Fred McDowell's "Shake 'em on Down"......it's really loose and funky, "Fireman Ring the Bell," with it's distinctive guitar tone," the hypnotic "Peaches," the frenetic ".44 Pistol," and the best version ever of Burnside's "Goin' Down South," which closes this fantastic album, which was produced by Deep Blues author Robert Palmer and featured Burnside with drummer Calvin Jackson, bass player (and son) Duwayne Burnside, and guitarist Kenny Brown. 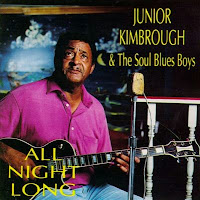 Kimbrough's Fat Possum debut, All Night Long, was recorded in his juke joint, a converted church.  He's backed by Burnside's son, Garry, on bass, and Kenny Malone (Kimbrough's son) on drums.  Rockabilly legend Charlie Feathers once called Kimbrough "the beginning and end of all music," and that's as apt a description as I can come up with myself.  The songs sort of fall together at the beginning and fall apart at the end, but it's completely mesmerizing.  Kimbrough's world-weary vocals, his guitar playing, at once droning and hypnotic, then eerily melodic, and just the sheer energy of the music is just amazing.  Although other artists have tried to duplicate Kimbrough's music since his death in 1998, including various family members who grew up around that sound, I can say that I've never heard anyone sing and play just like Junior Kimbrough, and I don't think I ever will.  His sound was completely and uniquely his own, and some of his most memorable tunes, the title track, "Meet Me In The City," "Do The Romp!," "You Better Run," and "Done Got Old," are here in probably their best versions. 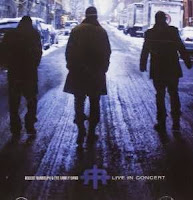 Several years ago, while browsing Amazon, I stumbled onto a live CD from Robert Randolph & the Family Band called, appropriately, Live in Concert.  I had been a huge fan of Randolph, since hearing his Live At The Wetlands CD (one of the best live albums ever) several years earlier, but I had heard next to nothing about this live album and there was little information about it online that I could find.  I placed it on my Wish List and basically forgot about it, picking up two more of Randolph's later recordings over the past couple of years.

This spring, I ran across it on my list (which is several pages long), and decided to give it a try.  I have to say that it is definitely worth a listen.  It's a bit different from the previous live album.  Most of the tracks on the first live release were long, extended jams, while the songs on this disc are tunes from his previous studio releases, with more structure (though there are still a few great instrumental runs present),  There are also a few guest stars present this time around, including Susan Tedeschi, who sings on the Staple Singers' "I'll Take You There," Ryan Shaw guests in the EW&F classic, "Shining Star,"  Steel guitarist Chuck Campbell also appears, along with Joey Williams of the Blind Boys of Alabama.  Also, as you might have guessed from a couple of the tracks listed above, there are several tunes here that are not on other Randolph albums,.....a few originals, like "Peekaboo," which is sort of a throwback to the Wetlands disc, and a few covers, including a scorching version of "Purple Haze" closes the disc.

This is a very enjoyable disc and it's a nice complement to Live At The Wetlands, showing that Randolph continues to evolve as a guitarist, singer, and interpreter.  We'll be looking at his latest collaboration with The Word (Soul Food) in the next few weeks, so stay tuned.