If you've been following the blues even a little bit over the past thirty years, you've probably heard of Too Slim and the Taildraggers or actually heard them.  Tim Langford (a.k.a. Too Slim) has been wowing crowds since the mid 80's.  He was based in Spokane, Washington for around 25 years and won just about every blues award that could be won in the region for Best Guitarist, Best Blues Band, Best Album, Best Song, and even won a Lifetime Achievement Award and was inducted in the Hall of Fame in the Washington Blues Society and The Cascade Blues Society.

About four years ago, Langford moved to Nashville, where he has teamed up with producer Tom Hambridge to release some of his finest recordings to date, including his 2013 studio effort, Blue Heart.  He continues to be not only one of the standout guitarists in blues/rock (especially on slide guitar), but he's also one of the best modern songwriters on the blues scene today, whether he's touching on current events, personal experience, or just raising the roof.  Over the years, his musical palette has grown to include blues, rock, roots, soul, country, folk, Americana, and even Latin influences. 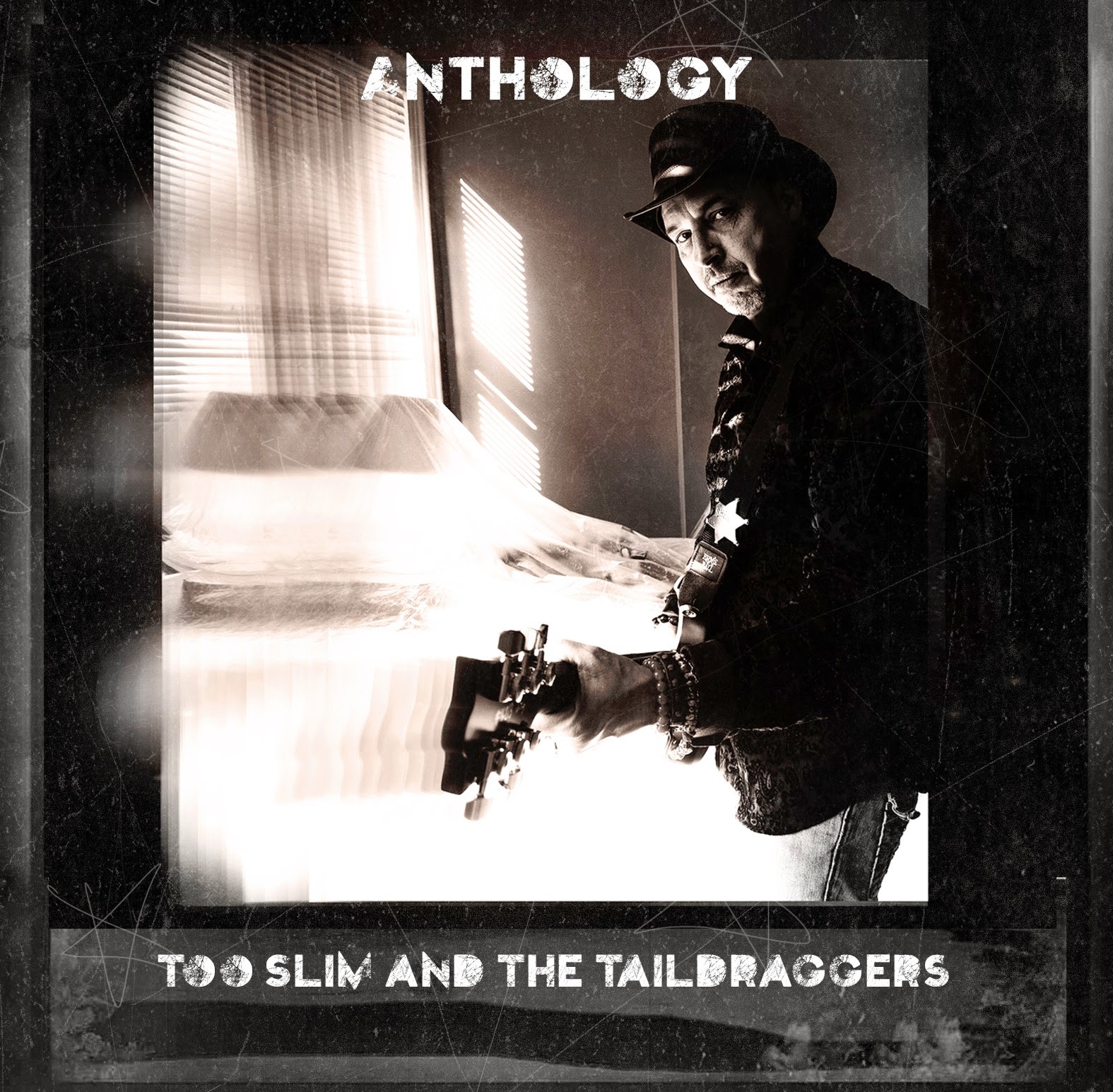 This summer, Langford released Anthology on his own Underworld Records.  The two-disc set captures 31 of the Taildraggers' finest moments from the past fifteen years, plus three excellent new songs, with Disc One representing the harder, more rock-edged side of the band and Disc Two focusing on the more acoustic blues and roots side.  There are also guest appearances from singers Curtis Salgado, Jimmy Hall, and Lauren Evans.  If you're a newcomer to Too Slim and the Taildraggers, Anthology is the best place to start, but after that, you will definitely want to check out Langford's other releases with the band, 18 in all, plus a couple under his own name (check out 2012's Broken Halo for starters).

Mr Langford was kind enough to sit down with Friday Blues Fix for Ten Questions With......last week and we truly appreciate his time and patience.  When you're done here, I strongly encourage you to seek out more information and recordings from this great artists.  I guarantee that you won't be disappointed with the results.

You have been at this for nearly 30 years non-stop…..what is the secret to your longevity in the business?

Well, I don’t know if I have any big secret other that I love what I’m doing. It takes a lot of hard work to keep a band rolling. As long as there are people out there who are interested in seeing the band, I’ll keep on doing what I’m doing. I have a lot of support from my wife Nancy and that’s very important. Being on the road is not the easiest of lifestyles. You have to have good people surrounding you. The business part is the hardest part of keeping a band rolling. I try to give my best at every show. You’re only as good as your last show and you’re only as good as the people that you surround yourself with.

Your new release, Anthology, showcases 31 of your previous classics over the past 15 years with Underworld Records.  How hard was it for you to go through and pick and choose what to put on the collection?

That was very difficult. I put a list together and kept changing it for about two months. I also wanted to put some new material on Anthology, so I had to write some songs. I collaborated with Tom Hambridge who I worked with on Blue Heart, which was my first CD I recorded after my move to Nashville. I wanted to present a package that represented my influences as a musician. I like all kinds of music and I have always tried to incorporate those influences in the music I write. I also wanted to feature some of my acoustic music and instrumentals on Anthology.

Are there any songs that you had a hard time leaving off Anthology?

Oh, yes!! I guess we might have to do Anthology Volume Two!!! I actually would like to do a compilation of the music I recorded for Burnside Records. Those masters are owned by a company called Allegro music now.  That would consist of music from my albums, ElRauncho Grundge, Swamp Opera, Blues for EB, Kingsize Troublemakers, and Wanted: Live. Those were recordings from the 1990’s. I guess maybe that will be a project for the future.

You draw from a number of different musical styles besides the blues…..who were some of your influences when you were starting out?

Did you always want to be a musician?  What do you think you would be doing if you weren’t a musician?

Yes, I did. I was drawn to music at a very early age. Once I started to play guitar, there was no looking back. I can’t imagine what I would be doing if I was not a musician. I don’t think I have ever thought of ever doing anything else.  I vaguely remember of wanting to play professional baseball when I was a kid. 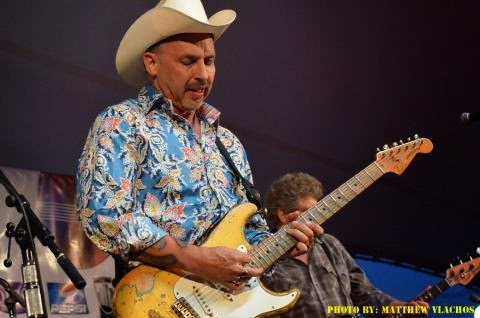 What has been the most memorable thing to happen to you during your long career?

Well something that sticks out in my memory is an encounter with Charlie Musselwhite. I had opened a show for him very early in my career with Too Slim and the Taildraggers. He was very nice to me and complimented the band. The next day he called me at my home and told me how much he liked the band and told me that I could use him as a reference at clubs when I was trying to get gigs. I have never forgotten that act of kindness on his part. He certainly did not have to do that, but went out of his way to help me. I was very surprised when I got that call from him.

Is there anything musically that you haven’t done yet that you would like to do?

I still have big dreams about the things I want to do. I’d like to jam with BB King, for one! Buddy Guy, too!! Jim Suhler (Guitarist with George Thorogood) and I have been talking about doing a project together and I’d like to do that.


You relocated to Nashville several years ago…….how has that affected your creativity, your songwriting, and your style?

When I was getting out of high school, my goal was to move to Memphis to go and play the blues. I guess I had some vision that I would meet people like BB King and the Allman Brothers and be able to absorb all the culture that I had read about. I did not make the move then, but I guess I got down south eventually. Nashville has a very different vibe from where I grew up. The talent level in Nashville is set at a very high bar. It makes you step up your game for sure. We mostly moved here to get more centrally located to tour, but I have met a lot of good people and it’s a great networking town. There’s definitely something in the air down here. There’s a lot of collaboration in Nashville songwriter-wise, so I think that has an effect on what comes out creatively.

Your last few releases have been produced by Grammy-winner Tom Hambridge….what does he bring to the proceedings that’s different from what you previously had?

Tom is a great musician and a great producer. He likes to get in there and capture the moment. You all get in a room together and knock it out. You just go cut the songs live till you get it. In Tom’s world that’s usually the first or second take!!

What music do you listen to in your spare time…..when you’re not working and trying to unwind?

I always go back to the Lightnin’ Hopkins stuff. I can’t get enough of it.  I mostly listen to the stuff I grew up on….Allman Brothers , Neil Young, ZZ Top . The new bands that I listen to are Drive-By Truckers, Black Keys, Jason Isbell, Rival Sons to name a few.

What’s next for Too Slim and the Taildraggers?

I, of course, would like to record a new CD, so I better get writing. I also want to try and build more of a following east of the Mississippi, so I guess it’s out on the road again. I also got a great new band of Nashville musicians, Jeff “Shakey” Fowlkes on Drums and Eric “Stretch” Hanson on bass.  I just want to keep evolving as a musician and songwriter, so it’s just back to working hard on trying to grow as a musician. That part never stops and you never stop learning. I just hope to stay healthy and feel grateful to be able to do what I do. I am thankful that I have the support of my family and hope the people who enjoy Too Slim and the Taildraggers keep showing up.