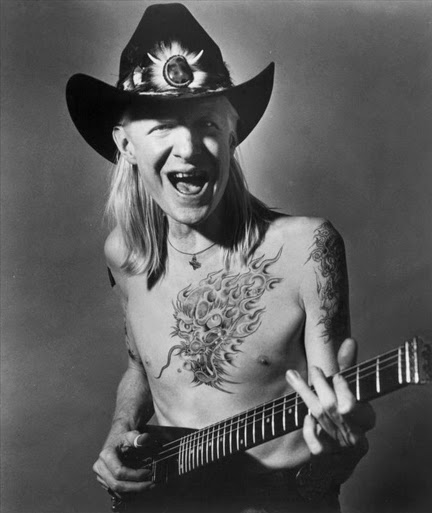 If you keep up with the blues at all, you're probably aware that Johnny Winter passed away last week at the age of 70.  I can remember the first time I saw Johnny Winter.  He was on a poster in a record store that I used to visit when I was in high school.  Although I wasn't familiar with him at the time, the picture was a promo poster for one of his releases on Columbia Records from the early 70's.  Didn't really think much about him at the time because I'd never heard him.  I did figure out that he and Edgar Winter (whose hit, "Free Ride," I was familiar with) were brothers.  Yes, I'm quite the detective.  If you're familiar at all with 70's FM radio, at least the kind that they played in my neck of the woods, you can imagine that I never got to hear a Johnny Winter tune.

I finally got to hear Johnny Winter a few years later, around 1982 or '83.  Back in HBO's early days, they would sometimes run a segment called "Video Jukebox," which featured what was then a fairly new concept for viewers.....music videos.  As a teenager, I was pretty taken with this new format and I tried to watch them whenever I could.  During one broadcast, they showed an old grainy video of Winter performing "Johnny B. Goode," and I was really blown away by not only the guitar, but Winter's gritty vocals, and the psychedelic effects of the video, of course.  It was a pretty mesmerizing performance for a wide-eyed teenager, but at the time, it really wasn't my musical bag.

A few years later, when I started listening to the blues, I was thumbing through the albums in the blues section at a record store near where I went to college.  As I've mentioned before, most of the blues records that I saw during this time, mid 80's, were the few blues records from Columbia, MCA, Warner Brothers, etc...., along with Malaco, which was local to us, being based in Mississippi, Hightone, and Alligator.  Many of my early blues album purchases were from Alligator, so I always paid attention to whatever I found from their label.  I had done pretty well by then with Alligator recordings from Albert Collins, Lonnie Mack, Son Seals, and Lonnie Brooks.

While thumbing through the albums this time, I happened upon an Alligator recording from none other than Johnny Winter.  It turned out to be his debut for the label, called Guitar Slinger, released a couple of years earlier.  The image of Winter on the cover was a lot different from the posters I'd seen in previous years......sort of menacing with that serious dragon-head tattoo on his chest, a cigarette hanging from his lip, and that futuristic-looking guitar.....so, yeah, I was curious.  I ended up walking out of the store with the cassette version of Guitar Slinger.

It was after I picked up this recording that I started finding out about Johnny Winter's earlier career....how he started as a teenage phenom in Texas, playing guitar, particularly slide guitar, at breakneck speed and with reckless abandon, joining his younger brother, Edgar, who played keyboards and saxophone.  They were soon playing professionally, recording for several local labels. When the brothers began to enjoy some success a few years later, many of these earlier recordings were released without either of the Winters' approval, which irritated both brothers greatly....not just because they didn't receive royalties, but also because to the brothers, these recordings were inferior to what they were currently doing.

He soon decided to focus his talents more toward the rock side of blues, enlisting a trio that consisted of future Double Trouble bassist Tommy Shannon and drummer Uncle John Turner, eventually signing with Columbia (a subsidiary label of CBS Records) in a huge deal rumored to be near a million dollars in value, playing at Woodstock, and seeing several of his albums chart as he was considered by many to be the next in a long line of great rock guitarists, following in the mold of Hendrix, Clapton, Beck, and Page.

In the late 70's, he moved to another CBS subsidiary created for him, Blue Sky, which led to a live album with his brother, and later he recognized a lifelong dream by serving as producer for Muddy Waters' comeback album, Hard Again.  Winter played guitar behind Waters on all of his Blue Sky releases and you can hear him cheering on the legendary blues man on their classic remake of "Mannish Boy."  Winter won two Grammys for his work on a couple of Waters' Blue Sky releases, but his own recordings, which sort of moved between blues, rock & roll, and blues-rock, weren't selling as well, so he ended up leaving CBS in 1980.

From CBS, he signed with Alligator, and released Guitar Slinger in 1984.  The emphasis was strictly on the blues and Winter played and sang like a man rejuvenated.  Alligator head man Bruce Iglauer and Dick Shurman (who co-produced with Winter) surrounded the guitarist with a regular All-Star team of Chicago musicians.....harmonica player Billy Branch, keyboardist Ken Saydak, bassist Johnny B. Gayden, and drummer Casey Jones, plus a fantastic horn section that included the great Gene Barge.

The result was an absolutely relentless CD, with Winter's blazing fretwork front and center on 10 great cover tunes that spanned old school soul ("It's My Life, Baby," "I Smell Trouble," "My Soul," "Kiss Tomorrow Goodbye") and Chicago-styled blues (Lonnie Brooks' "Don't Take Advantage of Me," Muddy Waters' "Iodine in My Coffee," "Boot Hill").  Winter sounds like he's having a blast on tunes like Earl King's "Trickk Bag," Dr. John's "Lights Out," and "Mad Dog," where he howls to the top of his lungs.  If you're a blues fan, you can't help but be taken in by his boundless enthusiasm. 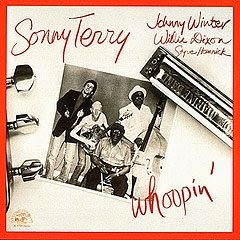 Along this same time period, Winter appeared on another Alligator release, backing harmonica legend Sonny Terry on Whoopin', which also featured Willie Dixon playing bass, Styve Homnick on drums, and Winter even joining in on piano.  This was one of the label's looser and rawer sessions and was a lot of fun.


The next year, Winter released Serious Business, which was in a similar vein as its predecessor, with the focus on old blues and soul standards (though Winter did contribute two originals this time around....."Serious As A Heart Attack" and "Good Time Woman.").  He's rejoined by Gayden and Jones, with Saydak playing on several tracks, along with Jon Paris on harmonica, and he is on top of his game with tracks like the menacing "Murdering Blues," the frenetic "Sound The Bell," the soulful "My Time After Awhile," and the hard-driving "Master Mechanic."  After years of wavering between rock and the blues, Winter was putting his whole focus on the blues, and having the time of his life doing it, as evidenced by his performances.  Serious Business, like Guitar Slinger before it, was nominated for a Grammy. 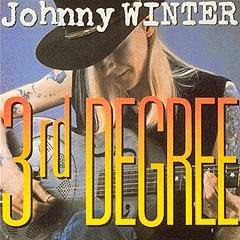 For Winter's third Alligator release, 1986's 3rd Degree, he varied the formula somewhat.  For starters, several tracks featured his former bandmates Tommy Shannon and Uncle John Turner, along with Dr. John, who played keyboards on a couple of tracks.  Gayden, Saydak, and Jones were still on hand and sounding great, but the tracks with Winter, Shannon, and Turner ("Shake Your Moneymaker," "Broke and Lonely," and "See See") really fire up the old synapses with Winter and it's like he goes back in time to their formative years.  Fueled by Dr. John's keyboard accompaniment, "Love, Life, and Money" is probably one of my favorite Johnny Winter tunes and one of his most inspired performances.  His roaring take on J.B. Lenoir's "Mojo Boogie" ain't far behind either.  As an added bonus on this album, Winter plays National Steel guitar on two great tracks, "Evil On My Mind" and "Bad Girl Blues."  I think of the three Alligator Johnny Winter releases, 3rd Degree may be my favorite because it features Winter in a variety of settings.

After 3rd Degree, Winter left Alligator and signed with MCA Records to their Voyager label, where he released back toward a more blues-rock sound, which wasn't as successful as his previous releases.  In the early 90's, Winter signed with Point Blank/Charisma Records and reunited with Dick Shurman, who produced several of his releases for the label, steering him back to his blues roots for some of his better recordings.  The focus on blues is one he pretty much kept until his death last week.  His final studio effort, Step Back, will be coming out in September and looks to be a completely blues-oriented album, based on the track list.  In other words.....Johnny Winter at his best.

Years ago, not long after I started using the internet, I met a fellow blues fan from Houston who grew up in the late 50's/early 60's.  He was a few years older than the Winter brothers and sometimes he would help them not only get gigs, but he also made sure that they got paid for their efforts.  According to him, both of the Winters were young, pretty frail and had vision problems (due to their albinism), so they were easy for some club owners to take advantage of.  He once told me that Johnny told him that neither he nor his brother were expected to live out of their twenties due to their health issues.  In the 70's, Winter battled a serious drug addition which, combined with the rugged life of a traveling musician, doubtlessly compounded his health problems.  Considering what my friend told me about Winter's early life expectancy, I think blues fans were very lucky to have him as long as we did. 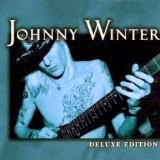 All of Johnny Winter's work is worth hearing, but I recommend that blues fans should start with his Alligator recordings and move out from there to hear his other fine work.  The cool thing is that all three albums (and the Sonny Terry collaboration) are still available, plus Alligator also compiled a "Best Of" CD (Deluxe Edition) back in 2001 that sums up his tenure with the label pretty well, too.