More Blues From The Magnolia State

Over a year ago, Friday Blues Fix took a look at some of the Mississippians currently helping to keep the blues alive.  This week, we revisit the Magnolia State with a look at more Mississippi bluesmen, past and present.  Since everyone is familiar with the usual Mount Rushmore figures of Mississippi Blues (Muddy Waters, Howlin' Wolf, John Lee Hooker, B. B. King......your mileage may vary on who would make up that quartet, but that's another post for another week), we will be focusing on some of those that you might not be familiar with, both living and dead. 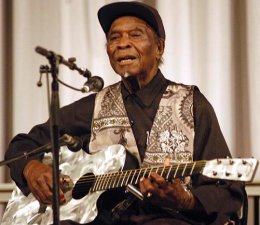 It was announced this week that Mississippi blues legend Honeyboy Edwards is retiring from the music scene due to health reasons.  This is a devastating blow to blues fans all over the world.  Edwards has been an incredible source of information about the pre-war blues era (especially Robert Johnson) for numerous writers and interviewers over the years and served as a source of encouragement to blues musicians all over the world.  The 96-year-old maintained a very active schedule up until recently.  He was the last of the pre-war bluesmen and if you were able to see him perform, you were in for a treat.  Fans wishing to send him get-well wishes can do so by emailing mfrank@earwigmusic.com.  Friday Blues Fix wishes Honeyboy a long and enjoyable retirement. 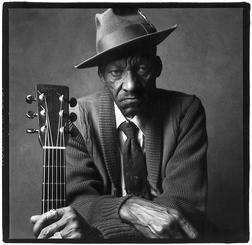 James "Son" Thomas was a regular sight at most of the Mississippi Delta Blues Festivals until his death in the early 90's. He was one of the most visible artists in the state, due to being the subject of several books, notably Bill Ferris' Blues From The Delta, and he even appeared on several documentaries, commercials, and television shows. He was also a renowned sculptor and his replicas of human heads often brought him more money than his music did. His son, Pat Thomas, has continued his father's legacy, both as a musician and an artist, appearing on the recent M for Mississippi documentary. Thomas was a talented singer and guitarist who even got an opportunity to play at the Jimmy Carter White House in the late 70's. Here's one of his classic tunes, "Beefsteak Blues. By the way, if you happen to visit Thomas' grave in Leland, MS, you will see the opening verse of this song engraved on Son's tombstone.﻿﻿﻿ 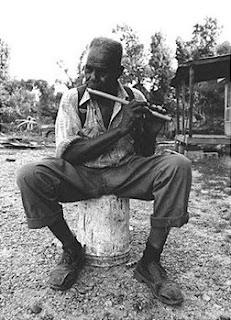 Othar Turner was a part-time musician and a full-time farmer. He specialized in playing fifes that he made himself from river cane. Fife players were once numerous in the Delta, but Turner was one of the last ones when he passed on in 2003. He was also famous for his Labor Day picnics when he would slaughter and cook a goat in an iron kettle for his friends and family while entertaining with his band, the Rising Star Fife and Drum Band. Eventually, it grew from a family gathering to include fans from all over the world. Turner died in 2003 at the age of 94. His daughter Bernice, who had been living in a nursing home for some time suffering from cancer, died that same day. She was 48. Funeral services were held for Othar and Bernice and a procession leading to the cemetery was led by Turner’s band, with 13 year-old Sharde' Thomas, Othar's granddaughter, at its head playing the fife, as taught to her by her grandfather. Turner played many traditional tunes with his band. This is one of them…..”Granny, Will Your Dog Bite?” Not the usual blues sounds you hear at FBF, but blues nonetheless. 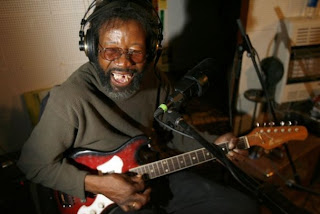 Next up is R.L. Boyce, who got his start in Turner’s band, playing the bass drum.  Boyce is also a guitarist and has weekly houseparties of his own in on Sundays.  The recent documentary, M for Mississippi, captured one of these parties on film, which was a study in chaos.  It was not only filmed but the music was recorded for a soundtrack.  Recording engineer Bill Abel worked out of the back of a Volvo station wagon, with sound equipment where his back seat used to be.  He did all this during a thunderstorm with wires of all kinds coming from the house to the Volvo outside.  The interview with Boyce was also classic, riddled with multiple interruptions ranging from barking dogs to drunken partygoers….all captured on film.  If you haven't seen the documentary yet, you really need to check it out.  Here’s Boyce during a visit to Jimbo Mathus' Delta Recordings Studio in Como, MS 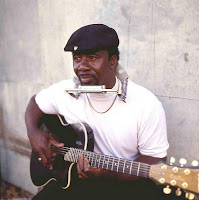 Another star of the M for Mississippi documentary is Terry “Harmonica” Bean. Bean is a relative youngster in the blues, in his late 40’s. He plays guitar and harmonica and sings. He started out as a stud athlete in high school, working on a baseball scholarship, but suffered a career-ending injury. He took up the blues and now tours throughout the state and the country. He was also recorded for M for Mississippi, at the Ground Zero Blues Club, singing “I’m A Bluesman.” Bean once was only a harmonica player, but was encouraged to learn to play the guitar by fellow harmonica player John Weston after Bean's band stood him up a couple of times.  The clip below, though hard to see, features Bean with T-Model Ford at Red's in Greenville.  The song is "Red's Hideaway," which would serve as this blog's theme song if I could ever figure out how to do it. 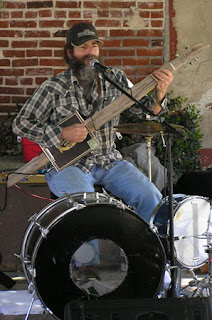 Speaking of one-man bands, here’s the previously mentioned Bill Abel, from Belzoni, MS. In addition to his recording engineer skills, Abel is also a noted painter and musician who makes and plays guitars made out of cigar boxes. Very cool. He recently released his own disc, called One-Man Band, and played all the instruments on it with no overdubs at all.  Below is from Abel's appearance at the 2008 Mississippi Delta Hip Hop Festival, where he plays Muddy Waters' "Can't Be Satisfied" on a homemade diddley bow made of a cigar box, broom stick and string, sounding better with a one-stringed instrument than many guitarist sound with six strings. 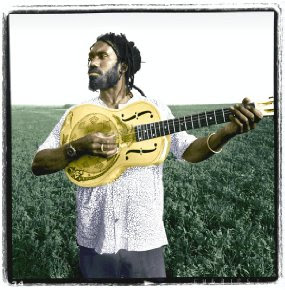 When New Orleans native Corey Harris decided to record his Mississippi to Mali disc in the early part of the last decade, he was going to use Othar Turner, but Turner passed away the week before recording was to begin. Harris decided to use Turner’s band with his granddaughter, Sharde' Thomas, in her grandfather’s place, and they appear on several songs on the disc.  Fortunately, there is some footage of Harris and Othar Turner performing together, in the clip below, the pair tackle the blues standard, "Sittin' On Top Of The World." 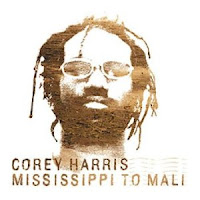 Mississippi to Mali took Harris from the Mississippi Delta to Africa and he used both Mississippians (Turner’s band along with Sharde' Thomas, Bobby Rush and Sam Carr) and Africans (Ali Farka Toure and his band) to help him make music.  It's a remarkable record, showing that there's actually little difference between the blues as it developed in the Mississippi Delta and at the origin point in Africa.  Harris is one of the few modern country blues artists these days, but has begun to move more and more toward world music, notably reggae, to the point where his last few releases have been pretty much devoid of blues.  Hopefully, he will return to the blues in the near future.


There are plenty more Mississippi bluesmen out there today that we will check out another time.  We owe a huge debt of gratitude to record labels like Broke & Hungry, Cat Head, Hill Country, Fat Possum, and numerous others for getting these artists on record.
Posted by Graham at 12:01 AM