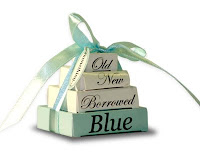 Back again by popular demand, it's time for one of the favorite topics on Friday Blues Fix.  If you're new to the scene, here's how it goes......we discuss an elder statesman of the blues from the 20's to the 50's (Something Old), a relative newcomer or new release to the blues world (Something New), a classic song of the past (blues or rock) reinterpreted by what may be an unlikely source (blues or rock) (Something Borrowed), and someone who epitomizes the very essence of the blues (Something Blue).  Let's get started, shall we? 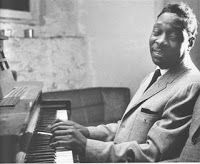 For Something Old, this time we're just going back to the 50's, looking at one of the legendary piano men of the Chicago era, Mr. Otis Spann.  Folks, I could sit and listen to Otis Spann play the piano all day long.  Spann was longtime member of Muddy Waters' band, beginning in the early 50's until the late 60's.  He also played with Howlin' Wolf and Bo Diddley on some of their Chess recordings and, memorably, he appeared on Buddy Guy's classic Vanguard recording, A Man and the Blues

.  He also recorded as a frontman, releasing several wonderful albums, notably a couple of sessions for Candid Records

in the early 60's with Robert Lockwood, Jr. and St. Louis Jimmy Oden, but passed away at the young age of 40 in 1970.  Spann will get the full FBF treatment in the near future, but in the meantime, enjoy this splendid version of "Spann's Blues," accompanied by Matt "Guitar" Murphy, Willie Dixon on bass, and Billy Stepney on drums. 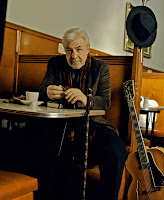 For Something New, let's look at a veteran of the blues/roots scene and his latest release.  Some of you that were TV nuts in the 80's and early 90's may remember Jim Byrnes from his role as Lifeguard on the TV show, Wiseguy, and also on Highlander in the early 90's, but he's also been a musician since way back.  He's a St. Louis native, who relocated to Canada and has recorded with Black Hen Music for the last few years, releasing some great diverse albums of blues and roots music.  His latest release, Everywhere West

, came out at the end of 2010 and was one of my favorites of the year, and was a great mix of covers and new music written by Byrnes and producer Steve Dawson.  One of the best tracks was an excellent reworking of Bobby Bland's "Yield Not To Temptation."

For Something Borrowed, let's check out Freddie Roulette.  Roulette is something of a rarity in the blues.  He plays lap steel guitar and his unique sound has spiced up recordings by Luther Allison, Earl Hooker, Harvey Mandel, John Lee Hooker, and Charlie Musselwhite.  He moved to San Francisco in the 70's and eventually stepped away from music for a while to raise his children.  In the late 90's, he resurfaced, returning to the Windy City to record Back In Chicago

, with an all-star band featuring Willie King and Chico Banks.  Chances are when you hear a track featuring Roulette, you will agree that he hasn't recorded nearly enough over the years.  For Something Borrowed, check out Roulette's haunting take of the old Santo & Johnny rock & roll classic, "Sleepwalk." 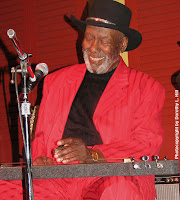 For Something Blue, how about some more lap steel guitar?  This time around, it's Sonny Rhodes.  The self-proclaimed "Disciple of the Blues" got his start in the 50's, playing clubs in the Austin, TX area as Clarence Smith and the Daylighters.  After serving in the Navy, he relocated to California, where he worked as a DJ and learned to play the bass, backing Freddie King and Albert Collins on occasion. He never recorded consistently until the late 70's, when he released the single, "Cigarette Blues," and the album, Just Blues

, on his own Rhodesway label.  He eventually caught on with the Atlanta-based Ichiban Records in the early 90's, then enjoyed a decade-long window of recordings for Ichiban, Kingsnake, and Stony Plain.  Up until 9/11, Rhodes was famous for wearing a turban when performing, but he now wears more conventional head gear.  If you were a fan of the short-lived sci-fi TV series, Firefly, you may be aware that Rhodes performed the theme song, "The Ballad of Serenity."  Here's Rhodes from 2009, playing the Hop Wilson (another lap steel master) classic, "Black Cat Bone."