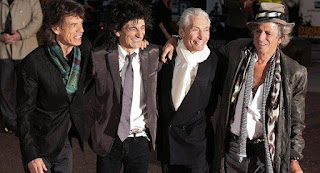 The Rolling Stones recently celebrated their 50th anniversary as a rock and roll band.  It's sort of being done in a low-key manner, hardly the way the group has conducted itself over the years, with a tentative concert schedule and several books being released to coincide with the big event.  Given how the world usually goes nuts celebrating any little anniversary as a "big event," this one has been relatively quiet, but has picked up steam now that the group has done a couple of performances and there's been no need for paramedics so far.

Part of this is due to the fact that in the rock and roll world, becoming an "Elder Statesmen" is not considered to be too cool (except to the older fans that still follow them).  Everyone remembers the line, "I hope I die before I get too old," from The Who's "My Generation," in the 60's.  Of course, The Who still do the occasional performance, too, but in rock and roll, while it's pretty neat to see these old pioneers out there making music, at the same time it's sort of sad, too, because try as they might, they really can't duplicate the magic that they had forty (or fifty) years ago for the most part.  In the case of bands like the Stones, with 68 year old Keith Richards, looking not a day over ninety, doing his guitar-slinger thing, and 69 year old Mick Jagger bouncing all over the stage, it's sort of wince-inducing.

That being said, they're still leaps and bounds above most of the up and coming rock talent, musically speaking....try as I might, I can't picture my daughters putting a Mick Jagger poster up in their rooms.......which is one reason why people still shell out triple digits for their tickets.  Please keep in mind, that I am by no means degrading what these guys do.  Frankly, it's good to see them performing at a pretty high standard and still making new music...not content to rest on their laurels and just conduct an "oldies" tour.  What amuses me is the fact that probably none of them ever imagined they would still be doing it when they were the same age their grandparents were when they got their start.

﻿
There are numerous reasons that these guys (and ladies) continue to plug away at this business well into their Golden years.......money, of course...fame.....it's the only thing they've ever done.....they love what they're doing......etc.....  But what a lot of people may not realize about why these rockers (and others, like 67 year old Eric Clapton and 68 year olds Jeff Beck and Jimmy Page) continue to work could be because their idols and influences continued to work into their 70's and 80's (and sometimes 90's).  The musicians that influenced a lot of these older rockers were blues musicians like Muddy Waters, Howlin' Wolf, Albert King, Otis Rush, Sonny Boy Williamson, Honeyboy Edwards, John Lee Hooker, B. B. King, and Buddy Guy.

Unlike their adoring musical followers, most blues artists over the years haven't really had the luxury of retiring with their millions to large, palatial mansions with classic car collections and multiple houses on multiple continents.  While most of them loved what they were doing, many continued and still continue to work because they need to in order to survive.  For blues fans though, the fact that their favorites are in their 70's or 80's doesn't bother them in the least, and newcomers to the blues don't seem to mind either, because these old dudes can still bring it.


If you think about it, most of the older blues artists that come to mind maintained a high standard of making music and many continue to do so.  Artists like Robert Lockwood Jr., Honeyboy Edwards, Pinetop Perkins, Henry Townsend, and Homesick James continued well into their late 80's or 90's while maintaining a pretty high standard.  Today, FBF will take a look at an impressive list of artists, all 75 or older, who continue to make some mighty music with no signs of letting up anytime soon.

Buddy Guy - Guy turned 76 earlier this year (July 30).  To me, he's playing as well as he did over twenty years ago, when he began his resurgence.  He still has the youthful energy and enthusiasm and, man, can he make that guitar talk!  Despite looking and performing like he's thirty years younger, he's, amazingly, joined the ranks of Blues' Elder Statesmen.  May we all be doing so well when we reach his age. 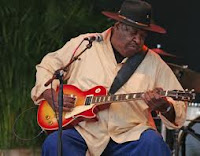 Magic Slim - The Magic Man, 75 years of age in August, has lately taken to sitting down while performing, but that's his only concession to age.  He's still a whirling dervish of traditional Chicago blues and boasts a nearly endless repertoire of blues songs.  He just released another phenomenal set of his usual fantastic blues, Bad Boy.  Plus, he fronts one of the best bands in the business, the Teardrops. 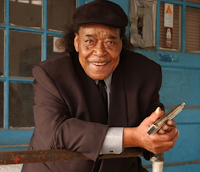 James Cotton - The 77-year-old Cotton has played with just about everybody who was anybody since the early 1950's, including Muddy Waters, Howlin' Wolf, and Otis Spann, as well as leading his own group since the 60's, recording several acclaimed albums during that time.  He's also battled throat cancer in the mid 90's and has not recorded a vocal since around 2000.  That hasn't slowed him down very much though.  He can still blow the back off the harmonica.  Check him out below at the 2010 Chicago Blues Festival with another Elder Statesman, 84-year-old Matt "Guitar" Murphy, during his return to performing after a lengthy recovery from a stroke. 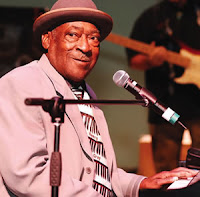 Henry Gray - At 87 years of age, the legendary piano man had been active since the mid 40's, playing with artists like Robert Lockwood, Jr., Billy Boy Arnold, Morris Pejoe, Little Walter, Sonny Boy Williamson (Rice Miller), Jimmy Reed, Jimmy Rogers, Buddy Guy, Otis Rush, Elmore James (he played with him the night James died), and Koko Taylor.  He's also recorded solo over the same time span, on labels like Chess, Excello, Blind Pig, and Hightone.  He continues to tour and record with his band, the Cats, and shows no signs of slowing down. 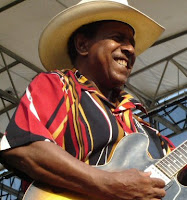 Lonnie Brooks - The amazing Brooks will soon be 79 years old.  He was one of the first blues artists that I ever heard and his hybrid of blues mixed with rock & roll, down-home country (he appeared on Hee Haw once), and the sounds of the Louisiana swamp is a potent mix.  Though he hasn't recorded in over a decade, he still tours with his band and occasionally performs with his two sons, Ronnie Baker Brooks and Wayne Baker Brooks, and is well-known for his live shows and his great band. 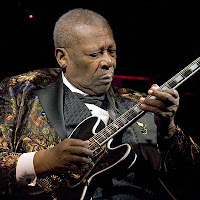 B. B. King - King just turned 87 in September, but he works a schedule that would wear out a person forty years younger, with relentless touring and performing.  His vocals are grittier than in his heyday, but he still delivers, and his guitar playing....forget about it.  In his hands, Lucille is a force of nature, powerful as a hurricane.  It will be a sad day for all when Mr. King decides to retire, but something tells me that he will be going strong until the Great Bandleader upstairs comes calling and there's nothing wrong with that.  Something tells me all the artists we've looked at today will want to go out the same way.