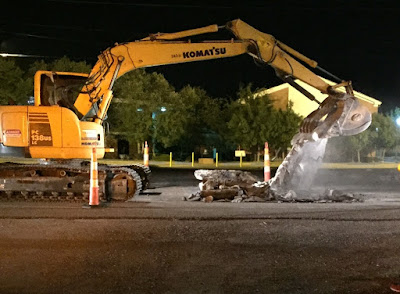 Well, this was another long week, working every day and several nights.....at least enough nights so that I wasn't able to do a lot of work on a post, which means that this one is clocking in just before Friday morning arrives.  Hopefully, things will slow down a bit and soon there will be time to devote to a longer, more informative post.  I have several in the works that I just need to get to.  In the meantime, let's look at a couple of hidden gems in the FBF collection.

Many years ago, I was a regular on eBay.  Well, I wasn't buying very much, but I was browsing quite a bit.  I eventually made it over to the music section and I found a treasure trove of blues CDs that were available for pennies......new releases, old releases, imports, out-of-prints, etc....  I couldn't believe that so much was available.  It had gotten to the point that I couldn't find anything in stores and what I could find was so expensive that I could only get one or two at a time, if that.  Soon, I was picking up five or six CDs, new or used, a week for a small amount of money.  The post office folks soon got tired of selling me money orders.

As time passed, I sort of moved away from eBay.  It got to the point that the low prices weren't quite as low and I had more than enough music to listen to, but I picked up a LOT of great music by going that route.  This week, let's look at a couple of my favorites that came to me via eBay. 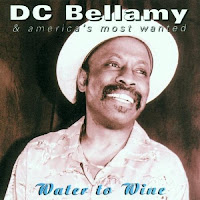 D.C. Bellamy - Water to Wine (Rooster Blues):  A Chicago native, Gregory "D.C." Bellamy was half brother to Curtis Mayfield and the Impressions would often hold rehearsals in his family's living room.  Bellamy began playing guitar at age nine and was a rock n' roll fan at first, but living in Chicago, he just couldn't avoid the blues.  For years, he worked as a sideman to Betty Everett, Donny Hathaway, Gene Chandler, Brook Benton, Jimmy Reed, Artie "Blues Boy" White, Otis Clay, and many others.

Bellamy relocated to Kansas City.  In 2000, Rooster Blues was relaunched and one of their first releases was Water to Wine, Bellamy's debut recording.  It was a great set of mostly original tunes and Bellamy really has a sound all his own, mixing the blues with R&B, with a writing style that's similar to his half brother Mayfield.  In addition, he has a fine voice and a distinctive guitar style.  He later released another album, Give Some Body to Somebody, on Stackhouse Records in 2006, but that's been it, as far as I can find, which is a shame because he is a real talent. 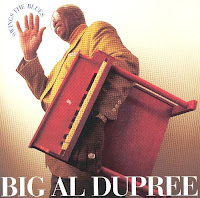 Big Al Dupree - Swings The Blues (Dallas Blues Society):  Dupree was an in-demand tenor sax player by the time he reached high school in Dallas in the mid to late 30's.  He played in several touring combos until World War II.  When the war was over, he played in Dallas, fronting the Heat Waves of Swing and backing artists like Pee Wee Crayton and T-Bone Walker, until he decided to step back, content to work as a singer/piano player in cocktail lounges.  That's what he did until 1994, when he made his first festival appearance at the Texas Blues/Soul Barbecue.  Soon, he was signed by the Dallas Blues Society, who released this, his debut CD, in 1995.

If you like classic blues, this should be on your shopping list.  It's ten tracks, nine covers and one original song by Dupree.  He plays piano and sax very well, and he's backed by Teddy Morgan on guitar.  Blues fans who dig the smoky, jazzy blues of Walker and Clayton will really enjoy this one.  Dupree has a warm and confident vocal style and breathes life into these classic tunes.  Every once in a while, I'll run across this one and when I do, I have to plug it in.  In fact, I'll be plugging it in again as soon as I get finished posting tonight.  Wonderful stuff. 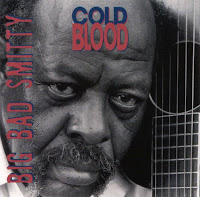 Big Bad Smitty - Cold Blood (HMG/Hightone Records):  I heard Smitty (born John Henry Smith) on an HMG sampler, where he was roaring through "Don't Mess With My Wife."  The raw, visceral nature of his vocals, his guitar, heck....the whole song.....just grabbed me by the throat and wouldn't let go.  His vocals strongly resembled Howlin' Wolf and his whole style brought to mind those great Chess recordings of Wolf and Muddy Waters.

Growing up, Smitty played with another Delta legend, Roosevelt "Booba" Barnes, before settling in Jackson, MS, where he played with the likes of King Edward, Sam Myers, and Johnny Littlejohn.  After recording a number of sides for Jackson's Ace Records, he relocated to St. Louis.

Cold Blood was actually his second release, and it's a fantastic set of rugged, old school, Mississippi blues.  Smitty roars through these songs with his rugged vocal style and spirited guitar work.  He's joined by former Wolf sideman, guitarist Hubert Sumlin, on four tracks, all of which were associated with his former boss.  Smitty does a fine job on these tracks, but all of the songs really stand out.  Sadly, Smitty suffered a stroke in the early 90's, not long after these recordings, and passed away in 2003.  This is a great set of old fashioned, wild and wooly Mississippi blues.