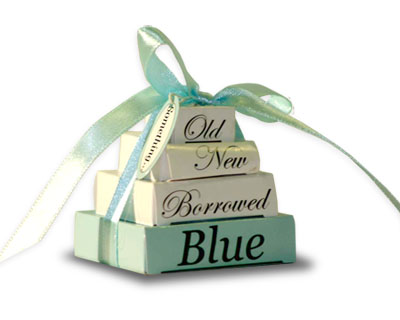 Here we are again, revisiting one of FBF's most popular topics.  To recap, for those new to the blog, Something Old represents a blues artist from the Old School of blues.....could be from the 1920's through the 1980's.  Something New represents either a relative newcomer to the blues or a new album that you might enjoy.  Something Borrowed can be either a blues artists covering a song from a different genre (rock, country, jazz, etc....) or an artist from another genre covering a blues song.  Something Blue is an artist who is considered the epitome of the blues.  Everybody on board?  Then, let's get started...... 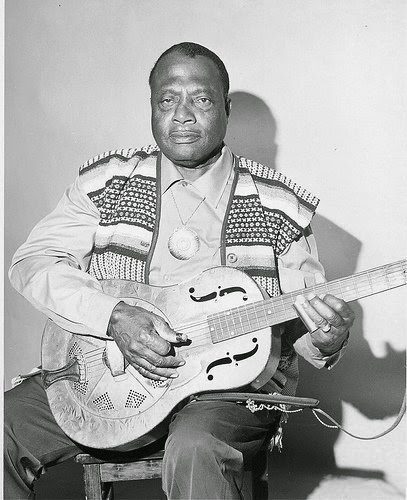 For Something Old, here's Booker T. Washington White, a.k.a. Bukka White, who was an influence on his young cousin, B.B. King.  White was born in 1909 and learned to play guitar at the age of nine from his father, who worked on the railroad for a living.  A meeting with Charley Patton sealed the deal for White on being a musician, and he spent much of his early years riding the rails from the Delta to St. Louis, and playing parties and joints for tips.  He also played baseball, spending some time in the Negro Leagues with the Birmingham Black Cats, and also took up boxing as a professional.  In 1930, he recorded several songs in Memphis, both blues and gospel, under the name Washington White.

In 1937, White shot a would-be assailant and ended up spending three years at Mississippi's notorious Parchman Farm.  Prior to his incarceration, he recorded two songs for Lester Melrose on the Vocalion label, one of which, "Shake 'Em On Down," became a hit while he was in prison.  Upon his release, he recorded twelve additional songs for Vocalion.  This songs are regarded as some of the most powerful blues ever recorded, with White ruminating on prison, isolation, loneliness, and misfortune.  Many of these songs were covered by other artists like Big Bill Broonzy, Bob Dylan, John Mayall, etc.....down the road, but White virtually disappeared soon after these tracks were recorded, serving in the Navy, then settling in Memphis, working in a factory.  Though he was thought to be dead by many new fans who had found his music, he was rediscovered in the 1960's by a pair of fans who, based on his song, "Aberdeen, Mississippi Blues," sent a message to "Bukka White (Old Blues Singer), c/o General Delivery, Aberdeen, Mississippi."  White had a relative who worked in the post office and got the letter to him in Memphis.

White's later recordings didn't approach the power and majesty of his Vocalion work, but they were inspired and effective nevertheless.  He was pretty prolific, recording and playing for many years until his death in 1977, his slide guitar and robust vocals virtually intact from his early years.  Check out White's first hit, "Shake 'Em On Down," and be sure to listen to some of his other tunes when you get a chance. 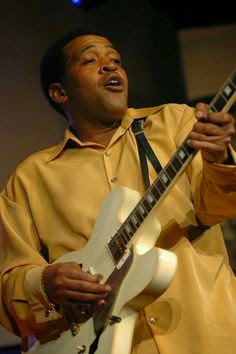 For Something New, here's a taste of Eddie Cotton's most recent CD, Here I Come.  The title track features some mighty fine guitar work and Cotton's vocals, which bring to mind 70's Memphis-styled soul.  Here I Come is one of two new releases on Grady Champion's new DeChamp Records (the other being JJ Thames' debut, which we discussed at FBF with her a few weeks back).  Why Cotton isn't a bigger deal in the blues world is a mystery because he certainly possesses the total package as an entertainer......great singer, guitarist and songwriter.  Hopefully, that mystery will be solved once and for all if more fans get their hands on this disc.  It's a great mix of blues, soul, and funk. 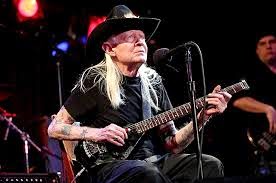 For Something Borrowed, let's check out Johnny Winter's fiery cover of Bob Dylan's "Highway 61 Revisited," from Eric Clapton's Crossroads Guitar Festival a few years ago in 2007, with backing from Derek Trucks and his band.   Although the song is Dylan's, I think that Winter made this song his own over the years and this performance is pretty impressive.  You can see the band members shaking their head and smiling in amazement and wonder at some of Winter's guitar fireworks on this version.  The guitarist had been battling some health problems before this performance, but you never would have guessed it by watching him play.......just a jaw-dropping performance from one of the all-time greats.....eight solid minutes of guitar heaven.

For Something Blue, let's check out Mel Brown.  Mel Brown backed some legendary blues stars over the years, including a lengthy stint with Bobby "Blue" Bland, Johnny Otis, Sonny Boy Williamson, Etta James, and Albert Collins.  He released a series of albums in the late 60's/early 70's that perfectly melded blues, funk, and jazz and are considered collector's items today.  He served for several years in the 80's as a member of Antone's house band in Austin, and even learned to play piano in the process.  He eventually relocated to Canada, where he enjoyed a late career boost with some fine recordings for Electro-Fi Records.  My favorite of his "comeback" releases was Neck Bones & Caviar, which has some really nice moments, one being Brown's cover of Muddy Waters' "Woman Wanted."  Brown, who passed away in 2009 at age 69, played a lot of different styles over his career, but his sound was always rooted in the blues.  Check out some of his consistently strong catalog, along with some of his recordings with Bland and others, when you get a chance and prepare to be impressed.