I was going to do my annual Top Discs You Might Have Missed post this week, but I realized that I've already covered most of those discs you might have missed in previous posts this year, so if you're really loyal FBFers, you really shouldn't have missed them, right?  With that in mind, this week, Friday Blues Fix will do a few capsule reviews of discs that you probably didn't miss.  As always, full reviews of these releases can be found either in past or upcoming issues of Blues Bytes. 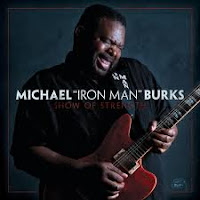 Michael "Iron Man" Burks - Show of Strength (Alligator Records):  I've seen the word "bittersweet" come up an awful lot with this release.  That's not the way Michael Burks would want this to be remembered.  Instead, remember it just like you remember his previous four releases, as an incredible set of powerhouse blues that Burks poured every ounce of blood, sweat and grit into creating.  The guitar work was as phenomenal as ever and the vocals here rank with his best.

I miss the big man greatly and regret that we will never get the opportunity to hear more music from him, but I can't call this bittersweet, even the last song, a fantastic cover of Charlie Rich's "Feel Like Goin' Home" leaves you smiling wistfully.  It's just too good a set to leave you with sad feelings.  Say what you will about his tragic passing, but I think even his biggest fans agree that Michael Burks left nothing on the table when he departed for Blues Heaven.  If you've heard this, more than likely you will agree. 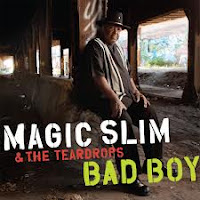 Magic Slim & the Teardrops - Bad Boy (Blind Pig):  You know what you're getting with the Magic Man with few exceptions.  Bad Boy is no exception.  Nobody does the traditional Chicago blues as well as Magic Slim....he lives and breathes them.  He still has those ferocious growling vocals and that guitar that sounds like its strung with barbed wire.

As on previous releases, the Human Jukebox tears through an inspired set of covers that includes the Eddie Taylor-penned title track, Denise LaSalle's "Someone Else is Steppin' In," Detroit Jr.'s "I Got Money," Muddy Waters' "Champagne & Reefer," Roy Brown's "Hard Luck Blues," and Albert King's "Matchbox Blues," as diverse as set as he's ever tackled, but he makes them all sound like his own.   Slim's own tunes (three of them) hold up well with the covers and the Teardrops are as solid a backing core as ever.  If you're a Magic Slim fan, you probably have this already.  If not, well...what are you waiting for? 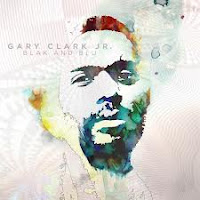 Gary Clark, Jr. -  Blak and Blu (Warner Bros. Records):  Clark's star has been on the rise for the past five years.  He had a major part in John Sayles' 2007 film, Honeydripper (which we reviewed here) and was selected by Eric Clapton to be a part of his 2010 Crossroads Guitar Festival.  Clark's appearance on the Crossroads DVD led to his signing with Warner Bros., which led to his well-received EP last year and to this release, which is making a lot of noise and climbing up the charts.  Some of the noise is good (blues artists making good, earning wider popularity, etc....) and some is not so good (blues artist sells out for larger audience, etc...).  We've heard all this before with other blues artists in the past who have gained mainstream popularity.

Over the past few years, Clark's been compared to Hendrix and SRV a lot, and while I do see similarities, there's more to Clark's talent.  He's an amazing guitarist, no doubt, but he also has a real knack for songwriting and is a gifted singer.  With Blak and Blu, the blues is present on every track, without a doubt, but he also mixes plenty of hard rock, old-school soul, funk, and even a bit of hip-hop.  With that said, you can safely say that Clark has the talent to not only appeal to older blues fans, but also to newly arrived blues fans, which is really what a new blues artists needs to do to keep the music fresh and vital.  If this is what the future of the blues will look like, I have no problem at all with it. 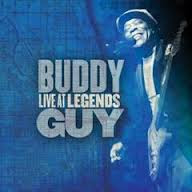 Buddy Guy - Live at Legends (Jive/Silvertone Records):  I don't know....maybe I expect too much of Buddy Guy.  But then, when you're recognized as blues royalty, the bar should be pretty high.  Over the years, he's released recordings that have exceeded that bar comfortably, but then there's also been a few that didn't come close.  I think when he's inspired to do so, he's capable of turning out some incredible work, but sometimes, it's more like he's going through the motions.

On this set, one of the last live appearances he made at Legends' old Windy City location a couple of years ago, he's pretty inspired, ripping through a fairly strong, but standard set of tunes from his more recent releases (including the perennial crowd pleaser, "Damn Right I Got The Blues"), plus a smoldering version of Muddy Waters' "I Just Want To Make Love To You."  However, the live set only clocks in at about 35 or so minutes and about seven or eight of is spent on a couple of "medleys" blending Hendrix, Clapton, John Lee Hooker tunes, which is not bad in itself, but I would much rather hear Buddy Guy do "Buddy Guy" than Hendrix and Clapton, or at least flesh these versions out a little bit more.  A lot of his fans probably won't mind what's done here, but I do.  In any event, the brevity of the set works against it a bit to me.

Also included are three studio outtakes from the Living Proof sessions that were done shortly after this live set.  They are first rate, especially the funky "Coming At You," co-written by Delbert McClinton, and a really inspired version of Waters' "Country Boy," where Guy revisits his roots in a big way.

I have to admit that I was a bit puzzled by this disc because it seems to be a more-or-less run of the mill portion of a live date padded by a few studio tracks.  It could have actually been released to coincide with Guy receiving the Kennedy Center Honors this week.  As stated above, maybe I expect too much of Buddy Guy, but in my opinion, this should be better.  For his loyal fans, it should keep them satisfied until his upcoming new disc, slated for a 2013 release.


Before we go, check out the nominees for the upcoming Blues Music Awards (BMA's) later in the Spring....a most impressive list.


That's all for now.  Friday Blues Fix hopes everyone has a happy and safe 2013.