As much great music as there is out there for blues fans, there's always a few releases that through no fault of their own slip through the cracks.  Friday Blues Fix feels like it's our obligation to advise lucky blues fans about those discs that they might have missed over the years.....to allow them the opportunity to backtrack and see what they might have missed, were it not for the dedication and devotion of FBF.  Let's look at five releases that deserve wider attention.

Eomot RaSun - Three Days Walkin' (APO):  Remember listening to those old Chess, VeeJay, and Excello recordings and wondering why they don't make cool recordings like those anymore?  Well, Eomot RaSun brought those days with his debut recording, way back in 1999.  RaSun only started playing the blues in the 80's, backing Windy City legends like Jimmy Rogers and Pinetop Perkins.  This session was recorded by Analogue Production Originals (APO) just like they used to do them, stick the band in the studio and let them go.  RaSun is backed by an outstanding band.....Jimmy D. Lane on guitar, Bob Stroger on bass, and Sam Lay on drums.....for ten great songs, several originals (most written by RaSun and Lane), two songs by Little Walter ("Last Night" and "Blues With A Feeling") and one by Howlin' Wolf ("Poor Boy").  RaSun's harmonica playing, like nearly everyone else who's ever played the blues, is strongly influenced by Little Walter.  Lane's guitar work pays tribute to the Chicago blues guitarists of the 50's.  The disc recaptures everything that was great about those old recordings.....strong songs that touch on familiar themes, a great band that places every note right where it needs to be, and a more-than-capable front man with harmonica chops to die for and a soulful voice that sometimes brings to mind a young Bill Withers.  Hopefully, this guy will record a second disc in the near future. 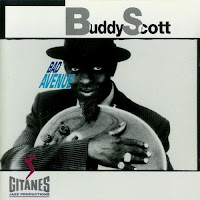 Buddy Scott - Bad Avenue (Verve/Gitanes):  Scott was from a musical family...his brothers, singer Howard and guitarist Walter, are longtime members of the Chicago music scene, and his son Kenneth "Hollywood" Scott, was guitarist/bandleader for the late Tyrone Davis.  Scott himself led the family band, Scotty and the Rib Tips, for decades as they built a huge following in the Windy City.  The Rib Tips even recorded a set of songs for the second set of Alligator's Living Chicago Blues series.  By the time Scott finally got to release a solo album in 1994, his health was declining rapidly.  However, he sounds really good on this set of songs, which leans heavily on old blues standards.  Shortly after the album's release, Scott passed away after a battle with stomach cancer.  He left us with this release, a poignant reminder of how good he really was and how good he could have been had he gotten more opportunities to record. 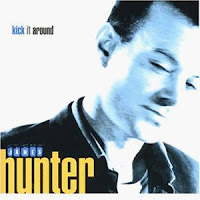 James Hunter - Kick It Around (Ruf):  Something of a well-kept secret, Hunter specializes in singing soul, R&B, and blues of the 1950's variety, with vocal influences like Sam Cooke, Ray Charles, Clyde McPhatter, and Bobby Bland.  He also plays a mean guitar.  Hunter appeared on a couple of Van Morrison's 90's recordings and also was part of Morrison's Rhythm & Blues Revue.  For Kick It Around, his 2001 release, Hunter wrote most of the songs (the covers are a splendid version of McPhatter's "Lover's Question" and Bo Diddley's "Dearest Darling") and the emphasis is more on R&B and soul than blues, but Hunter's stinging guitar leads add a bit of the blues to the proceedings.  This is a really good set that needs to be heard by more people.  Actually, a listener would do well to own any of James Hunter's recordings. 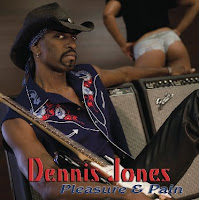 Dennis Jones - Pleasure and Pain (Blue Rock):  If you're a fan of blues/rock, this one will absolutely knock your socks off.  Baltimore native Jones grew up listening to the rock of the Rolling Stones, the Who, and Santana, combined with the great R&B, Blues and Motown of the late 60's, and guitar monsters like Hendrix, Page, and Johnny Winter.  After paying lots of dues leading various bands (including the L.A. group Blackhead), he formed the Dennis Jones Band in the late 90's and decided to play his incredible brand of rock-ribbed blues.  This album doesn't have a bad track on it.  There are some great songs, some with a message, some that are just pure fun.  The disc rocks hard with some crunching guitar, but there are also some tracks that also feature horns.  When this disc first came out in 2010, I almost let it slip past because I had a boatload of CDs to review at the same time, but after hearing several of the songs shuffled on my iPod, I returned to it and was glad I did.  You will be, too.

Ricky Allen - Live (Jefferson):  Ricky Allen, like many blues singers, got his start singing in the church.  He moved from his native Nashville to Chicago and had a recording contract within a year, recording such regional favorites as "You Better Be Sure" and "I Can't Stand No Signifyin'."  His best-known and most often-covered song was the classic "Cut You A-Loose," which reached the Top 20 on Billboard's R&B Chart in 1963.  At one time, his popularity nearly rivaled Muddy Waters'.  Allen walked away from the music business in the 70's, running a dry cleaning business and later, a limousine service for a number of years.  He tried a brief comeback in the early 90's, but was persuaded to return to performing at the turn of the century for the 2001 Monsteras Festival in Sweden (where this recording was done) and the Chicago Blues Festival in 2002.  Live finds Allen in great form, his vocals are nearly as good as they were in the 60's, and he reprises many of his old hits on this set.  It would be nice if somebody were to try to compile Allen's 60's recordings in one collection, but this set features live versions of most of his hits and is well worth searching for.