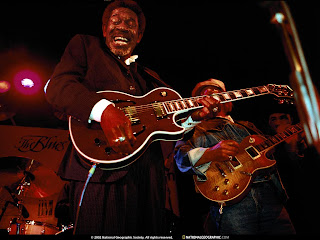 On August 12, 1997, the Blues World lost one of its most beloved members as Luther Allison succumbed to cancer.  It's hard to believe that it was 13 years ago.  Allison was just beginning to receive the acclaim that he deserved when he was struck down.  His incredible combination of powerhouse guitar and soulful vocals were finally being taken in by a wider American audience, after years of toiling away in Europe, and he was well on his way to becoming the Next Big Thing after three awesome CDs released in the mid 90's by Alligator Records and a truckload of Handy Awards.

It was not to be, however.  On July 10, 1997, Allison received the devastating news in his adopted hometown of Madison, Wisconsin.....terminal lung and brain cancer.  So what did he do?  Why....he did exactly what any Luther Allison fan would expect that he would do......he played a sold-out concert at the Barrymore Theatre in Madison that very night.....a concert just like every other concert he played, a marathon multiple hour show loaded with electricity, sweat, and intensity.  Only a handful of people knew the grim diagnosis he had received hours earlier.  No one else present could tell any difference in the 57-year-old bluesman.

When the news finally broke a few days later, most blues fans were devastated.  I can remember that I was.  I had just gotten into the internet a few months earlier and was reading the message board at Blues Access when I saw the news.  It gave a link to another message board where Allison's fans could post get well wishes and vent their feelings to each other.  Nearly all of them talked about a memorable performance they had seen or about meeting him in person, about how nice and warm he was to everyone he met, and how crushed they were upon hearing the news.  A month later, on August 12, he was gone. 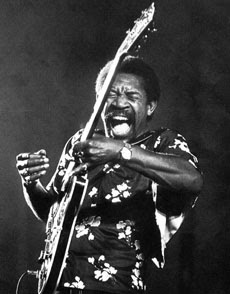 I never got to see Luther Allison perform or meet him, but I had been listening to him since the late 80's, when I heard a cut from him on the Atlantic Blues series

(Percy Mayfield's "Please Send Me Somebody To Love," from the Guitar volume

).  I was only able to track down his Blind Pig release, Serious

, at that time, but I played that cassette until it made that horrendous screeching sound cassettes used to make after extended use.  When I heard that he signed with Alligator, that might have been the last cartwheel I ever attempted.  I've never been one to be the "first" to grab a new release, but I did my dead level best to be at the record store when the new Luther Allison albums came out.

That July 10th performance was Allison's next-to-last performance (he would perform at Minnesota Zoo Amphitheatre in Apple Valley the next day), but as far as I know, it was his last recorded performance.  Part of the show were broadcast on a Madison radio station.  Four songs from the performance were later collected on a CD called Love The People, which was distributed by the Luther Allison Madison Memorial Fund to help defray some of the costs incurred by Allison during his short treatment.  It's a nice, but brief performance (mastered and edited by Alligator head honcho Bruce Iglauer).  Here's one of the songs from the disc, one of Allison's show-stoppers......Elmore James' "It Hurts Me Too."  If you've never experienced the force of nature that was Luther Allison, there are plenty of great discs out there 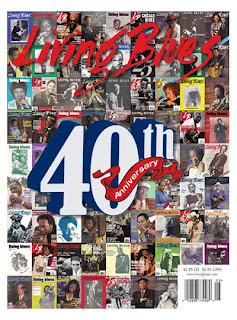 This month features the 40th Anniversary issue of Living Blues.  For the past few issues, the magazine has been focusing on each decade since its inception, beginning with the 70's and running through today.  Each issue, one of the highlights has been a list of 30 of the best albums of that particular decade, followed by a list of 30 albums that you might have missed.  It's been fun to see what I had on each list and also to see some that I would like to have.  Best of all, in the current issue, there is an expansion of LB's regular "Catching Up" series.  This month, the magazine looks at 12 artists that graced the cover of the magazine over the past four decades.  Among those featured are Long John Hunter, Irma Thomas. Drink Small, Jimmy Dawkins, Sonny Rhodes, Etta James, Jimmy Johnson, and James Cotton.  The great find in the bunch is Billy "The Kid" Emerson, an artist who recorded several big hits in the 50's (including "Red Hot" and "When It Rains It Pours") and had disappeared from sight for many years until recently.

Living Blues has come a long way from its early days.  When I first started reading in the late 80's, it was an all black-and-white format, even the pictures.  Some of the features from back then are now gone (Blues Rare and Well Done, Desert Island Discs, the live music reports filed from various locations in the U.S. and worldwide) and much missed.  Since around 1994, the format has changed to mostly color.  They still have some of the best photos to be found and the album review section ranks with the best, featuring a section for new releases and one for reissues.  Their personal profiles of artists both young and old are the best and most informative to be found.  There are lots of other great blues periodicals out there for sure, but for me, Living Blues is still the gold standard. 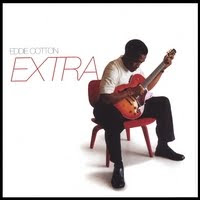 One of the albums that you might have missed during the decade of the 2000's was Extra, by Clinton, Mississippi native Eddie Cotton.  Cotton recorded two of the best live discs of the decade from Jackson's Alamo Theatre and Extra was a studio album released in between.  Cotton is a star in his home state, playing regularly in the Jackson area (he was also on Grady Champion's latest CD

), but he still hasn't busted out to a wide audience, at least nationally.  In Europe and Japan, Cotton is very popular.  Sounds sadly familiar, doesn't it?

If you listen to Extra, it's easy to see why those in the know appreciate him...... his guitar work is jaw-droppingly good and his singing is loaded with soul in the Stax/Hi Records tradition.  Musically, he's as comfortable tackling Lattimore's "Let's Straighten It Out," or Al Green's "Take Me To The River," as he is with a James Brown-styled number like "Funky Good Time," or "Cool With Me," not to mention when he goes straight blues with the Wolf's "Killing Floor," or Hound Dog Taylor's "She's Gone," or Albert King's "Born Under A Bad Sign."  First time I heard him (on the first Live at the Alamo Theatre disc), I thought, "sings like Al Green, plays like Albert King."  Not a bad combination.  This one can be picked up at CDBaby (so can the first Alamo disc) and is well worth a listen.  You can thank me later.  Meanwhile, here's a track from Extra, a funky cover of Marty Grebb's "Wrapped Up In Love."  Who knows......with a little luck, Eddie Cotton could become the Next Big Thing in the Blues.

Let's close today with a little more Luther Allison.  You can never have too much of the Soul Fixin' Man.  Here he is with Otis Rush and Eric Clapton from Rush's Live At Montreux 1986 DVD

.  That's a pretty impressive lineup assembled on one stage.